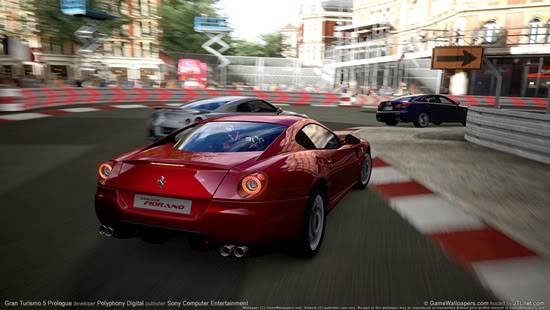 There was a video interview with Yamauchi. Here are some excerpts:

KY: ?The game is still under development but its release is not too far, it will be after the PSP GT release and, very probably, it will be a simultaneous world release?

MultiPlayer:What about the game features that were published on the official japanese site, 1000 cars, 80 tracks and YouTube download?

KY: ?We would like to wait to publish them, but what you read on the site is true.?

MultiPlayer: Is there something new in the single player mode

KY: ?If you look at the PSP version, you?ll see that the game is very different from the previous Gran Turismo versions. The 5th episode will have many similar features to the PSP version?

MultiPlayer: How the damages will influence the gameplay?

KY: ?The damages are not only visible, they will affect the driving style. It depends on the player, some players will like it, others will not?

MultiPlayer: Will we have Nascar and WRC championships in the game or just the cars?

KY: ?There will be real Nascar races in the game. Nascar had necessary to be included in the game. Regarding WRC championship we have been trying to add it to series since long ago. Now we got it.?

Thanks GTPlanet for the translation.