Back at E3 2005, along with announcing the PS3 and Gran Turismo 5, Sony announced that Gran Turismo would be coming to its new handheld. Almost five years later, we have Gran Turismo on the PSP. With that time Polyphony Digital made a visually appealing and fun to play game. However it is lacking a few features that make you wonder why the game took as long as it did to make.

Gran Turismo made very few sacrifices coming to the PSP. The games visuals are impressive and are some of the best on the PSP. There are over 800 cars to unlock from dozens of the worlds top manufacturers and over 30 tracks. The tracks are quite varied and are divided into four major categories, real circuits, city circuits, original circuits, and dirt and snow circuits. All of the cars and tracks are available for two of the three modes, time trial and single race. The other mode is drift trial which is only available on about a third of the tracks and most of the cars. Surprisingly there is no career mode. The lack there of makes the game feel less complete. With only the three modes, only those true racing enthusiasts will keep coming back day after day to play.

The overall driving experience is great, once you get the hang of driving with the nub. It’s not that it is terribly difficult; it’s a matter of accuracy. Obviously analog sticks are more sensitive allowing you to make more subtle turns. The trick is to get used to the fact that the nub cannot make those subtle turns. You can take a few laps in the driving challenge to get the hang of things before racing, but even after that it never really feels right. This becomes especially annoying in drift events as you struggle to avoid the walls. The frame rate is stable through the entire experience and it all looks great. Add to that a great racing soundtrack and it almost makes up for the nub.

Completing your races will give you money to buy your cars. You must be aware though that not every car is available for purchase from the beginning. The game tracks progression by days and each day will put different cars in the Dealership tab. It is a good way to keep players coming back to the game to see if maybe their favorite car is now available and to get players to use new and different cars, but at the same time it could take a while before you find a car you really want. To compensate for this you can trade and share cars with a friend. Not all cars are available for trade and sharing, but they are available for one or the other. Sharing allows you to essentially copy your car to another player’s game while trading forces you to give that car in exchange for their offer. Once you get you collection going you can begin tuning your favorite car. Tuning is simplified over its console brethren, but still works. The only problem is that you can only tune 30 of your “favorites”. It shouldn’t be too much of a problem for most people, but those who like to tune each and every car will be disappointed. The good news is that all of the cars you collect in the PSP version can be unlocked in Gran Turismo 5 when it releases by hooking up your PSP to your PS3.

One of the biggest disappointments of Gran Turismo on PSP is the lack of online multiplayer and online trading and sharing. The Ad-Hoc racing is very fun and runs smoothly, but to enjoy it you need friends with a PSP and Gran Turismo. It would have been great to go online and race with people around the world, but most will have to settle for the single player experience. The lack of online trading and sharing also makes it that much harder for collectors to complete their collection. 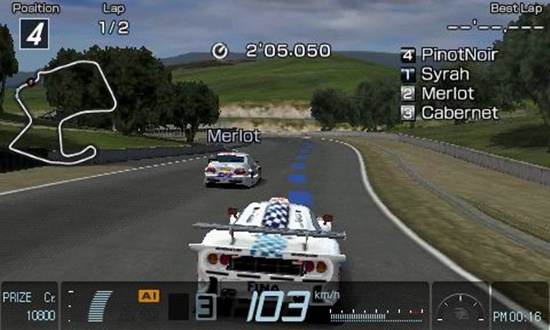 If only you could do this online.

Gran Turismo on the PSP is a very good racing game, but the lack of a career mode and any online support brings down the overall value of the game. If you can’t wait until Gran Turismo 5 or just want a head start on the car collecting then the PSP version will keep you busy until then. If however you were looking for a racing game that provides the complete racing experience on the PSP, you will be disappointed.

No career mode. No online multiplayer, only Ad-Hoc. Driving with the nub takes some getting used to.

Final Verdict:
GOOD
Though it feels a little stripped down, Gran Turismo on the PSP delivers what it should- an excellent racing experience.
A copy of this game was provided by Developer/Publisher/Distributor/PR Agency for review purposes. Click here to know more about our Reviews Policy.