I rarely disliked the moments I was playing Granblue Fantasy: Versus. Its gameplay, in both its traditional fighting and its action beat-em-up settings, is balanced and rewarding, offering something for players of any experience level. It’s when I wasn’t actually playing Versus that I got frustrated. Its RPG elements often fall flat, and its story is often confusing and frustrating. It often gets caught up with itself and loses focus of its strengths, but the gameplay is satisfying enough to hold up the rest of the package. Though some of its missteps and inconsistencies leave something to be desired, Granblue Fantasy: Versus marks a successful transition for the series into the traditional fighting game sphere.

In its most basic form, Granblue Fantasy: Versus’ gameplay impressively balances the ease of learning with the nuance of mastery. Taking what it’s learned from its previous fighters, developer Arc System Works has made it simple to pick up and play Versus without knowing deep fighting game mechanics. On PlayStation 4, simple attacks are mapped to the face buttons, and stronger ones are mapped to the shoulder buttons. More complicated combos are usually just various combinations of these simple attacks, some of which you may accidentally hit while mashing buttons. On lower difficulties, simple attacks and button mashing is often all it takes to have a decisive victory. 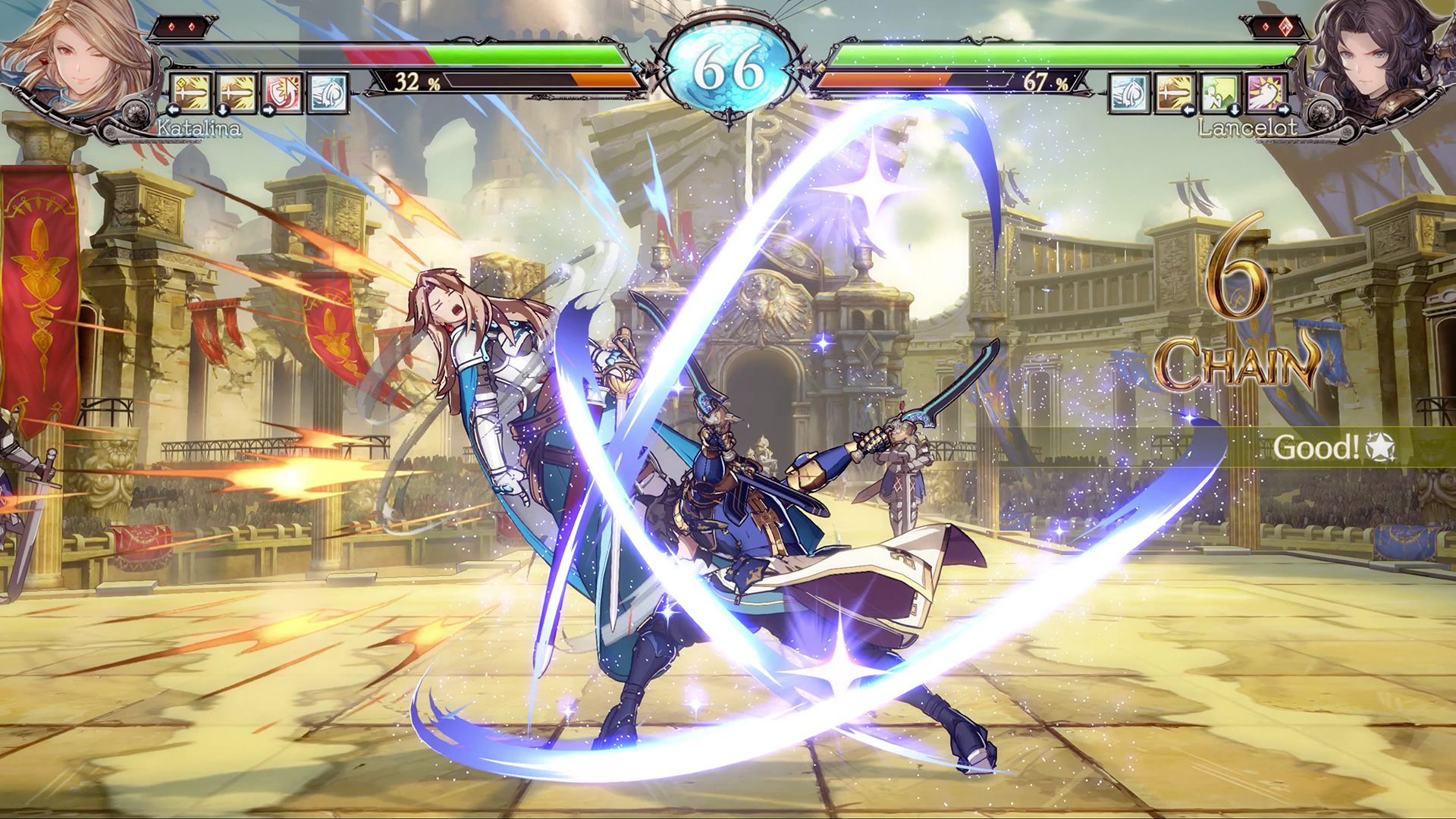 "In its most basic form, Granblue Fantasy: Versus’ gameplay impressively balances the ease of learning with the nuance of mastery. Taking what it’s learned from its previous fighters, developer Arc System Works has made it simple to pick up and play Versus without knowing deep fighting game mechanics."

Like in many fighting games, though, the nuance comes from mastering particular characters’ timing and strengths. Each of the eleven playable base characters, all of which are unlocked from the start, has a diverse range of movement and attack strengths. Characters like Ferry and Katalina are faster and more ranged, while characters like Ladiva and Vaseraga are slower and pack a punch up close. Taking advantage of their particular skills takes time and patience to learn, but it’s essential on higher difficulties to have a chance at victory. In these scenarios, Versus begins to shine, as it feels great to pull off more difficult victories with the same arsenal of simple attacks. Also helpful are the wide range of animations and sounds that match each skill, giving weight to each attack and making critical hits feel satisfying.

Especially important in mastering each character is learning their Skybound Arts attack, a highly powerful move that can only be performed after a meter fills up. Each character’s Skybound Arts attack relates back to a move from the original Granblue Fantasy, and they’re the most fun and diverse moves in the game. While fights on higher difficulties sometimes begin to rely heavily on these skills, their impressive cutscenes and entertaining diversity keep them from getting old.

There are two primary ways to play Granblue Fantasy: Versus. The first is the traditional one-on-one fighter modes, pitting two characters against each other online, locally, or against the computer. Within the Arcade mode, you’ll face a series of these fights in a sequential gauntlet style until you lose a match or defeat the final boss. This style is a serviceable way to escalate the basic fights to create a scope outside of single matches, and, with a choice of how difficult you want each of the fights to be, you can get what you want out of it, whether it’s a difficult ride to the top or a breeze through practice fights. 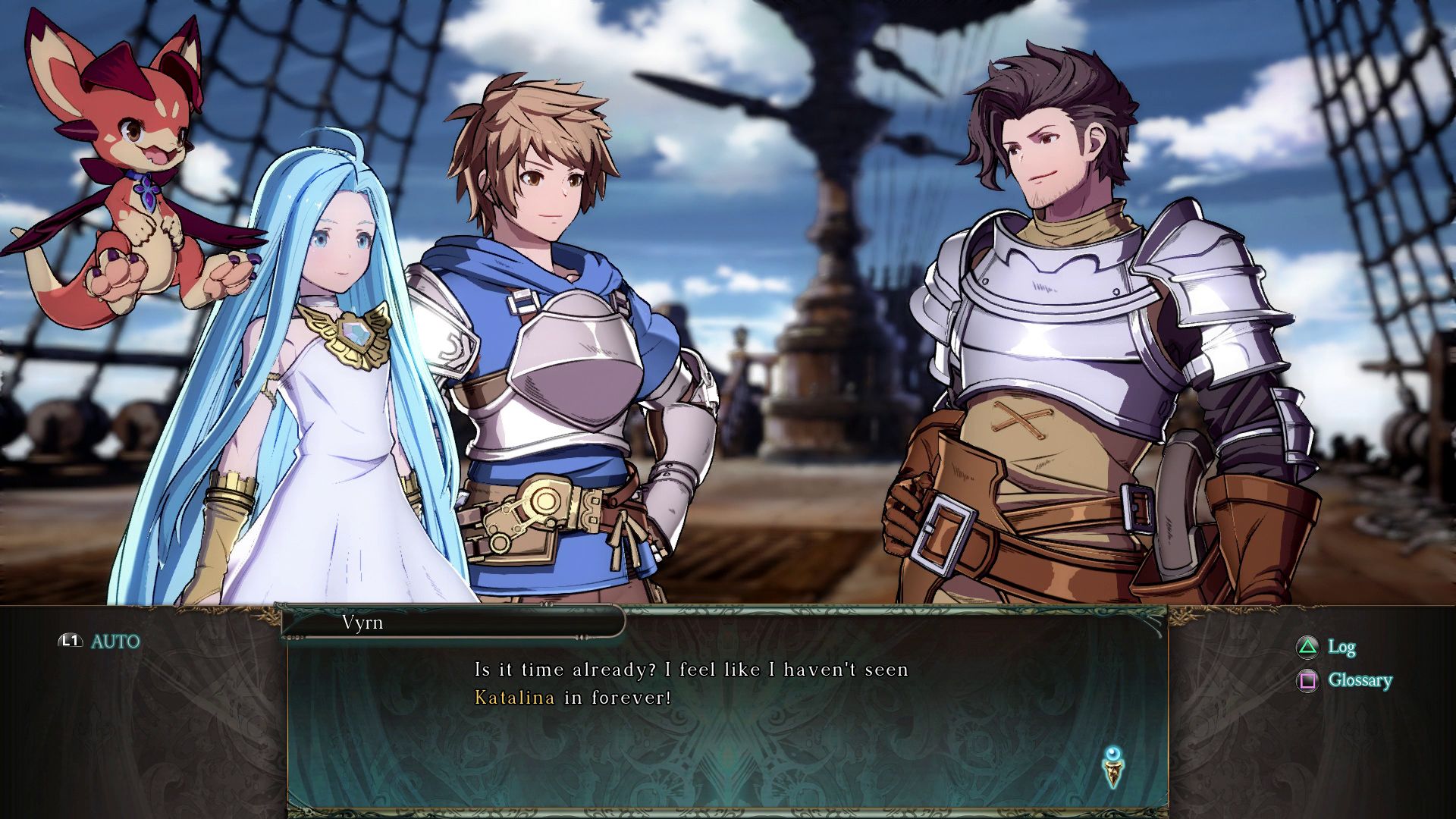 "While fights on higher difficulties sometimes begin to rely heavily on Skybound Arts, their impressive cutscenes and entertaining diversity keep them from getting old."

The most substantial mode is the touted RPG mode, featuring an entirely new story within the Granblue Fantasy universe. This is the mode you’ll likely spend the most time in because of the world and characters, but it’s somewhat inconsistent in its execution. The original story has its moments in its exploration of the universe’s lore, but it ultimately has to find ways to create fights between all the characters, which makes for some contrived story beats. As it progresses, there are some more interesting moments in revealing new details about existing characters, which fans of the series will appreciate, but it ultimately isn’t as engaging as it could have been.

The story is split into a series of chapters, usually with battles taking place at one primary location per chapter. Unlike the traditional modes, the RPG mode sees you with two characters on your team as you fight computer-controlled enemies in an action-RPG sense. The quests within the story can generally be classified as either fighting bosses or fighting enemy hordes in the style of a 2.5D beat-em-up action game. You have the option of choosing your primary characters and their weapons, which have different strengths and elemental effects. While these weapon options have potential for deeper strategies, I found myself able to pass virtually any mission having just upgraded the auto-selected weapon from my inventory. To complete the game, I rarely bought or drew for weapons because I could complete most missions with a high rating with just the base weapon. For purists, there’s an opportunity to fully maximize your squad and weapon grids to get the highest ratings on every mission, but otherwise, it’s a missed opportunity for depth. Once you get comfortable with a character, as I did with Gran, it’s possible to go the entire game without having to switch squad members, either, as there’s little benefit to using different types of characters in different situations. It works in the vein of allowing you to choose how you play, but it misses the chance to create any strategic decision-making points.

The non-boss quests become pretty repetitive after a while, too, as many of them feel almost identical, especially because they are often fought on the same arenas from quest to quest. Falling back on the primary core gameplay makes it so that it never gets boring, but I found myself wondering why I was fighting the same enemies many times, especially as it became easier to push everything to one corner of the screen and lose track of what’s happening. The boss fights, though, are where the RPG mode shines. Each boss is different from the next, and, though some of them are easier than others, they are where you have to use the most skill and thought. The most difficult bosses are also the most rewarding because they require you to learn and anticipate their moves. I always looked forward to fighting a boss because I never knew what would be coming next, and late-game bosses were especially interesting and enjoyable. 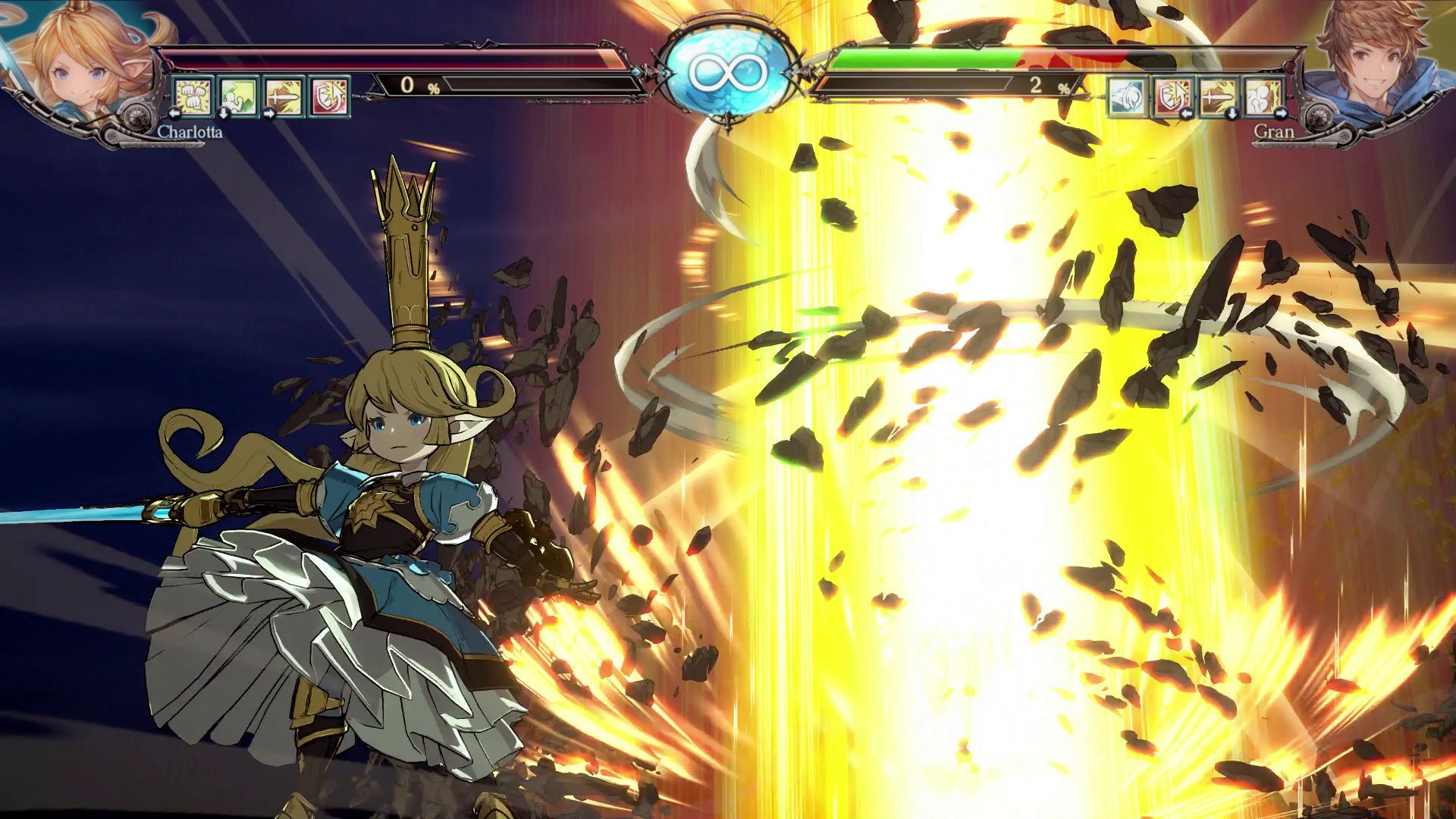 "The non-boss quests become pretty repetitive after a while, too, as many of them feel almost identical, especially because they are often fought on the same arenas from quest to quest."

As the quests progress, though, the structure of the story tends to get in the way of itself. Many of the quests, especially non-boss fights, are particularly easy and take just minutes to complete, and most quests are followed by a full sequence of dialogue. These sequences can be as long or longer than the missions, which makes it easy to be pulled out of the story and get tired of the exposition as I just wish to get back in the game. However, when in the gameplay, regardless of the difficulty or type of quest, it’s a fun way to learn the characters in a more relaxed action setting. Despite its flaws, there’s still a lot of entertainment value within the RPG mode that makes it worthwhile, especially for fans of the series.

As a full package, Granblue Fantasy: Versus has some missteps but packs a balanced and rewarding fighter into the Granblue Fantasy universe. Even in the moments of disappointment within the RPG mode, I was still looking forward to going back into the gameplay because of its surprising depth and balance. Both within the traditional and the sidescrolling beat-em-up gameplay, there’s something for new and experienced fighting game players, as its relative simplicity gives way for each character’s nuance and strategies. While its execution is inconsistent in some areas outside of gameplay, Granblue Fantasy: Versus makes for an otherwise impressive entry into the Granblue Fantasy universe.

Final Verdict:
GOOD
Despite an inconsistent RPG mode, Granblue Fantasy: Versus contains well-balanced and rewarding gameplay for fans, experienced players, and newcomers alike.
A copy of this game was provided by Developer/Publisher/Distributor/PR Agency for review purposes. Click here to know more about our Reviews Policy.