We gamers, as a bunch, have a stark tendency to be very bad at dealing with any kind of controversy. It is thus that I must very sheepishly admit to you that when GTA 4 was released back in 2008 I was very unimpressed by the whole affair. In spite of the almost unanimous critical praise and exceptional sales, I felt the fourth Grand Theft Auto slowed down its usually snappy pace to accommodate a lukewarm story that lost the comic over the top nature of the classic PS2 trilogy. Here it has a chance to redeem itself as I set out to review the two DLC chapters: The Lost and the Damned and the Ballad of Gay Tony, recently released on a single disc.

Let’s start with the gameplay tweaks that have been made. Not a huge amount has changed from the original GTA 4 formula, both for the good and the bad. The intense mayhem and seamless transition between third person shooter and driving mechanics remain, but are still riddled with mediocre gun play, uninspired mini games and a questionable control scheme. Why do I have to hold A to run?! It seems like a pretty weak point to pick up on I realise, but it perverts the whole experience and it requires you to constantly contort your hands in weird and wonderful ways just so you can run and move the camera simultaneously. On a similar point the use of the triggers is always a little off. I found this wasn’t a problem on the Xbox version but the PS3 controls decide to use the R2 and L2 buttons as your primary triggers for both driving and shooting. I personally found using these buttons so frequently was rather uncomfortable considering how far back they are. Also I found the squidgy nature of the trigger action has always bugged me, but that’s the controller design more than anything. These were annoyances that really spoiled the gameplay for me and were often hard to ignore.

In terms of new editions, we ought to set one thing straight. The helicopter controls are very bad. Very very bad. The lost and the damned (TLaD) is almost entirely exempt from this design flaw, but The Ballad of Gay Tony (TboGT) is plagued with helicopter sections that are much worse than they should be. 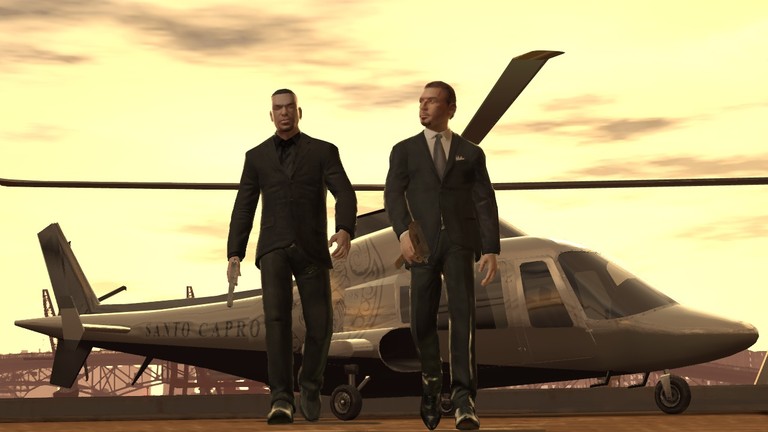 That chopper might look nice on the ground, but flying it is a real pain

On the other hand there are a few mission structure tweaks made which are well executed and fill a needed gap found in the original engine. For one we have a new checkpoint system that means you no longer have to start a mission from the very beginning if you fail mid-way. This was something that was a necessary update, as trying to play through missions in the original GTA 4 caused me to fill up my proverbial swear jar one too many times for my liking. Complementing this are an auto-save feature and mission scoring, which stop you having to drive to your safe house all the bloody time and make the missions more addictive respectively. Sadly these two aforementioned improvements are only present in TboGT, causing TLaD to feel like the weaker of the two comparatively. The new tweaks improve the experience more than you’d expect, but they often feel too little and too late.

One aspect the overall package is able to nail down is the unique feel each episode has. TLaD paints a grittier more run down Liberty City complete with sawn-off shotties and biker gangs saddling hogs in unison. In contrast TboGT seems more upmarket, focusing on the glamorous delusions of the criminal lifestyle; Complete with a more high tech arsenal of weapons and vehicles (P90 SMG for the win!) Whilst they paint their own distinct pictures, a good job has been done at keeping the DLC firmly linked in with the universe of GTA 4. The city retains the same level of detail as always and a few surprise cameos appear along the way. The mood set really hits the spot and the package should be highly commended for this aspect.

The missions of GTA 4 were always a sticking point for me, revolving around too much driving from A to B, and not near enough action. TLaD falls fail of this same transgression and you now have to drive from point to point in unison with the other gang members, making this aspect more tedious than ever before. By comparison I found the missions of TboGT were a breath of fresh air and re-invigorated the crazy and over the top side of the franchise I used to enjoy so much. They are also more varied in both their objectives and settings and are leagues ahead of the original game’s levels. 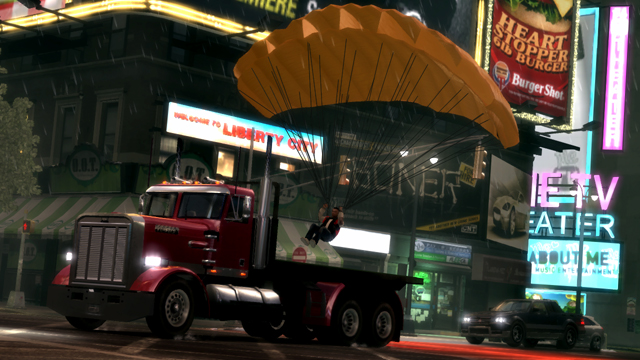 The Ballad of Gay Tony is a return to form, with the action being crazier than ever

The plot lines are as weak as ever following Johnny: VP of the lost biker gang as it falls into decay in TLaD, and Luis: Right hand man to Gay Tony, who’s string of successful nightclubs begin to fall into decay in TboGT. Thankfully the whole affair is somewhat lifted by the usually snappy dialogue being ever-present, as well as by the comic, if unsubtle, support characters that GTA has always been famed for. Sadly the main characters you control are a bit here and there. I found Johnny in TLaD to be quite a complex and oddly likeable anti-hero, but TboGT’s protagonist, Luis, seemed rather dull and lifeless. His only vaguely interesting characteristics being his Hispanic origin and, unsurprisingly, his stay in a federal prison. His back story was also badly explained, even when it was briefly touched upon. By comparison the characters that support Luis seem more full of personality than ever and were highly amusing, almost able to lift some enjoyment out of our intensely dull hero.

The unique style of each chapter is well seen in the visuals, with each episode showing you another side of Liberty City. The sights are not always so pleasant to behold however, as the graphics are, technically speaking, beginning to show a few signs of age. The motion blur effects and general textures are still spot on, but the stiff animations are as ugly and distracting as ever. One thing I found really disappointing was an appalling draw distance on occasion. Far too many times I saw grass and lamp posts just pop in to view out of nowhere and, whilst a small fault, it served to ruin the immersion somewhat. The graphics aren’t particularly bad, especially for a game that’s over two years old now. Regardless they are starting to show a few age spots here and there and this could be a sticking point for some.

The aural side of the presentation retains the series’ usual quality throughout. The licensed tracks on the radio always help immerse the player in the world and, even though some radio stations are missing from the original GTA 4, many new tracks are added for the disc versions of the two DLC. The voice acting is of the same high quality as the original game and never fails to impress. The sound effects aren’t as accomplished sadly, but don’t detract from the experience in any way. Just don’t expect to have your socks knocked off. The audio, overall, is of the highest calibre and is able to gracefully leap the hurdles that most other titles succumb to. 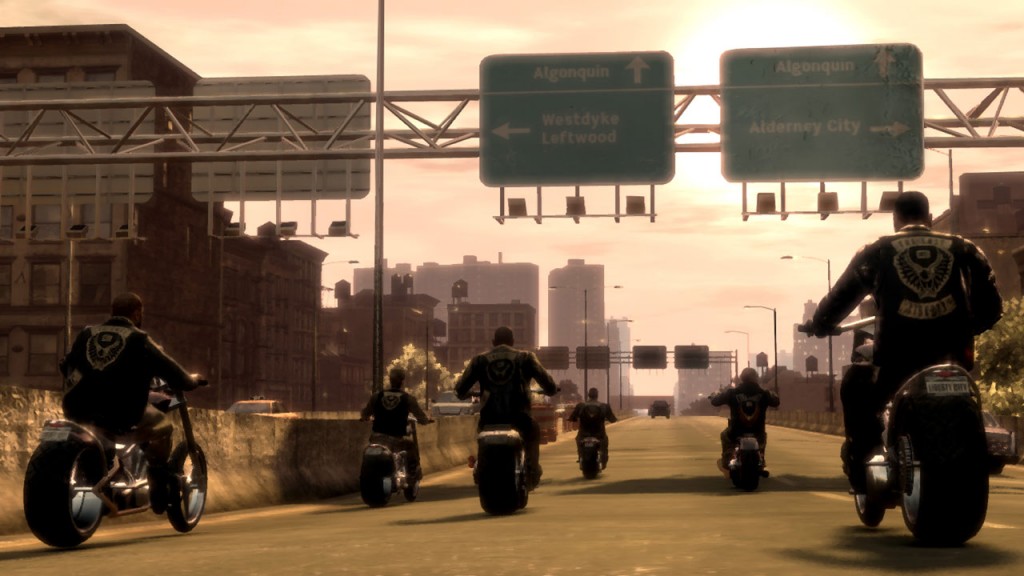 Considering the low entry price for the whole package, the value for money on offer cannot be argued with. Each episode is roughly ten hours in length and if you stop to take the sights you’ll find there could be upwards of thirty hours in total. That said, many of the later missions (particularly in TLaD) can be a bit of a slog and might not hold your attention for the entirety of the game. Whilst the single player aspect will doubtlessly keep you entertained, the multiplayer component of the game is an embarrassment. An attempt has been made to add new modes relevant to each episode, which is a nice touch, however the annoying phone menu system is still needed to access the multiplayer mode. I appreciate Rockstar’s attempt to integrate both the multiplayer and solo experiences, but the use of the phone is cumbersome and the basic matchmaking inadequate.

Overall the Episodes from Liberty City DLC disc does what it says on the tin. It is just more GTA 4, but a LOT more of it. I personally found the small tweaks and improvements were not quite enough to endear me to what I think is a stale and flawed game engine. Some of the missions are still a little dull but strides have been made to rectify this in TboGT. I cannot stress enough that the score given is my interpretation of the game. I found the dodgy controls, boring levels and ageing visuals too much to bear, but if you liked the original GTA 4 you will find a lot to enjoy in the new content.

This game was reviewed on the PlayStation 3 and Xbox 360.

Fantastic attention to detail, Some necessary tweaks to mission structure have been made, Each episode sets a unique tone, Lots of content

Missions are still a bit boring, Controls are still poorly thought out, Gun-play is still mediocre

Final Verdict:
FAIR
The two DLC episodes for Grand Theft Auto have been recently released on a single disc and, whilst they are able to hold a candle to the strengths of the original, they still retain many of its debilitating flaws
A copy of this game was provided by Developer/Publisher/Distributor/PR Agency for review purposes. Click here to know more about our Reviews Policy.