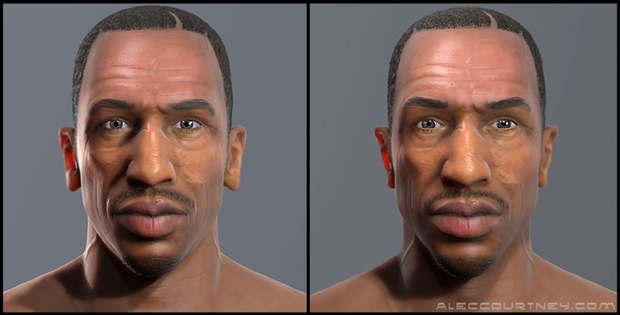 Rockstar recently announced Grand Theft Auto 5, last year’s critically and commercially acclaimed title, for the PlayStation 4, Xbox One and PC. So how would Carl ‘CJ’ Johnson, the protagonist of Grand Theft Auto San Andreas will look like if he ever made an appearance in GTA 5?

Carl ‘CJ’ Johnson was re-imagined by artist Alec Courtney when he posted his renders on Reddit. “I started the concept last night. It’s a very quick sketch up. I want him to fit perfectly in to the world along with Franklin. I’m open for suggestions, but please be realistic with your requests,” he said on GTA Forums.

Although, Alec specifically re-imagined it for the PC version of Grand Theft Auto 5, we are pretty sure that such level of fidelity can be rendered on the PlayStation 4 and Xbox One as well. We hope that Rockstar are taking a cue or two from this. Grand Theft Auto 5 is out again this fall. Stay tuned for more news and updates.