Grow Up Review – Started From The Bottom

Grow Up can be fun when it’s not getting in its own way.

In the midst of triple A, open world magnum opuses with the same objectives seemingly replicated throughout the game, Ubisoft Reflections’ Grow Home was a kind of revelation. It was a simple concept with a simple aesthetic but executed to brilliant effect. Keep in mind that the game itself wasn’t exactly perfect. However, like Valiant Hearts and Rayman Legends, it proved that Ubisoft was a company capable of thinking outside of its own tightly constricted box of annualized ideas.

"Grow Up does add a whole bunch of new things to further encourage exploration and survival in this height oriented adventure."

With the success of Grow Home, it only seemed a matter of time before Grow Up came about. The lovable B.U.D. is back and the mission this time is to collect pieces of M.O.M. after it enters an asteroid field and separates into various locations on a completely alien planet. From the outset, Grow Up throws in a lot of the signature “wacky” humour that Ubisoft is known for. Much of this is supplied by P.O.D., a drone-like assistant that teaches you about the various mechanics in the game world. P.O.D. can even act as your eye in the sky to examine a map of the planet and set waypoints. Teleportation points, which also act as respawn points, are scattered throughout the world, both ensuring a healthy number of checkpoints and a decent fast travel system for getting around quickly.

If you played even a few minutes of Grow Home, then Grow Up will be incredibly familiar. B.U.D. starts out with the ability to jump and essentially climbs up surfaces with the left and right bumpers/triggers. It takes some getting used to, especially when you’re trying to make great haste, and you can only jump off said surface by releasing those triggers. On the one hand, it creates an extra thrill as you’re not sure if you’ll execute the jump perfectly. On the other hand, when a game like this demands some level of precision for its challenges, more intuitiveness wouldn’t have been a bad thing. That’s just me nitpicking of course.

Grow Up does add a whole bunch of new things to further encourage exploration and survival in this height-oriented adventure. B.U.D. can absorb the DNA of flora forms in the environment and thus create planets to provide different advantages. There’s a miniature pollen geyser which launches you in the air, a bouncy mushroom, a tall stalk that slightly droops when planted vertically and much more. Over time, some of the flora forms tend to mix together in terms of functionality – like the flower pod that’s more compact than the pollen geyser but serves the same function – but they’re each generally useful in their own right. 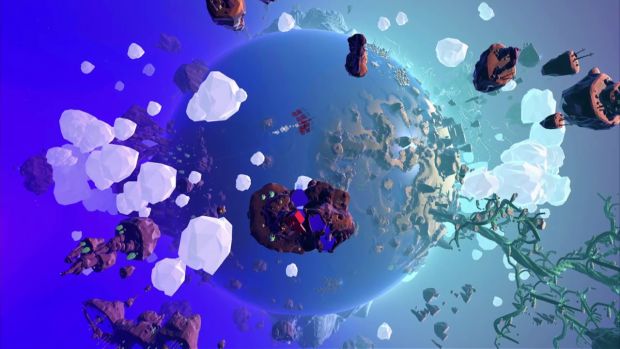 "The issue arises when the camera starts clipping into objects or suddenly swinging in a different direction."

B.U.D. also receives quite the array of new abilities. The jetpack is unlocked pretty early on and gives way to gliding, rolling around and much more. Special suits can also be equipped for different purposes like bumping up your gliding speed. Those are usually earned by completing the various P.O.D. challenges scattered throughout the world. A number of crystals can also be discovered throughout the world which subsequently power up your abilities further.

Here’s the thing though – Grow Up is a little too similar to Grow Home at times even with all the different mechanics thrown in. At times, I would ignore the flora forms and just maneuver Starplants into energy rocks to soar high enough to collect pieces of M.O.M. This isn’t to say flora forms are useless but they’re not quite as game changing as some of the new abilities.

It’s also worth noting that the fundamental gameplay of Grow Up could have used some excessive fine-tuning. Precise jumps and landings are required, especially in a height-focused game like this, but the movement tends to feel a bit too floaty. Even when B.U.D. is clasping on to things, his movement can get a bit janky. The animation looks less than fluid in those cases. And while generally tumbling around on the ground while walking isn’t a big issue, the movement becomes a problem when you overshoot jumps or fall down a significant distance, thus necessitating a slow climb back up. Also, who in the world decided it was a good idea to invert the controls when controlling a Starplant’s growth? Even after growing it out numerous times, it still took getting used to.

The camera is also not very helpful. To properly ascertain jumps or points to go, you’ll find yourself re-adjusting it regularly. Which isn’t even the main issue, by the way. The issue arises when the camera starts clipping into objects or suddenly swinging in a different direction. The latter never really arose much but the times it did happen confused me to no end. Throw in the odd movement and you have a pretty good amount of frustration to deal with during some of the P.O.D. challenges. 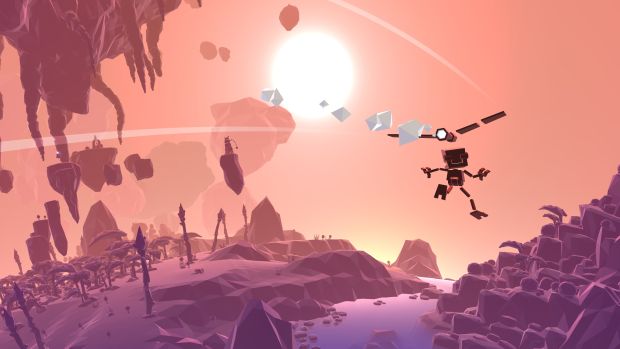 "This isn’t Assassin’s Creed Syndicate or The Division by any means and yet, Grow Up tends to stutter every now and again with its frame rate."

Thankfully, even with the similarities to Grow Home, Grow Up‘s world still looks fairly stunning. Each flora form is unique and never feels out of place on this colourful planet. Growing Starplants and watching several attachments, mushrooms and other flora take shape in the process is cool. It’s also incredibly fun to just gaze down at the world, especially when taking a huge dive off of a mountain top and gliding around. For all the simplicity of its art style, Grow Up achieves a strong visual presentation.

That’s why the slight frame stutters and drops are all the weirder. This isn’t Assassin’s Creed Syndicate or The Division by any means and yet, Grow Up tends to stutter every now and again with its frame rate. Granted, it’s nowhere near as bad The Division’s stutters but again, when the visuals are this simple, it shouldn’t really be that big of a problem on the Xbox One to begin with.

Grow Up is an intriguing adventure for both those who haven’t played Grow Home and those who relished the original. Veterans will appreciate the quirky humour and new mechanics despite the overtly familiar gameplay, technical issues and annoying movement. New players will find a relatively short game that doesn’t overstay it’s welcome, presenting a pretty world and a simple premise that will carry them through some decent main missions. There won’t be much reason to return beyond that, unless you want to torture yourself with P.O.D. challenges. Overall, Grow Up comes across as a Ubisoft sequel following the experimental opener – it’s typically enjoyable enough if you keep your expectations low but requires much more polish.

Uniquely colourful visual presentation. Fun to experiment with different flora forms and abilities. Intriguing challenge when it comes to scaling to higher summits. Relaxing background music. Generally exploring the world and hopping around is fun.

Movement feels way too imprecise and floaty. Camera can be less than reliable. Performance hiccups including frame stutters pop up every now and then. Way too familiar to Grow Home. Challenges are frustrating to complete due to control and camera issues.

An acceptably quirky adventure, Grow Up is an enjoyable experience that could have used a lot more polish, especially with regards to its movement, camera system and overall performance.

A copy of this game was provided by developer/publisher for review purposes. Click here to know more about our Reviews Policy.
Tagged With: Grow Up, pc, ps4, Ubisoft, ubisoft reflections, Xbox One