PS2 version of the game on PSN.

Earlier there were rumours of GTA 3 listing being spotted for PSN release, however, nothing materialized but this time it looks like the game may actually end up on PSN.

GTA 3 and I have such fond memories and I get nostalgic just thinking about it. The PSN release is slated for September 25 this year and is supposed to be an up-res version of the PS2 classic.

The listing was spotted on the PS Hong Kong website and still hasn’t been pulled. Considering the Sept. 25 date equals to just 1 week, there’s no point in doing so. 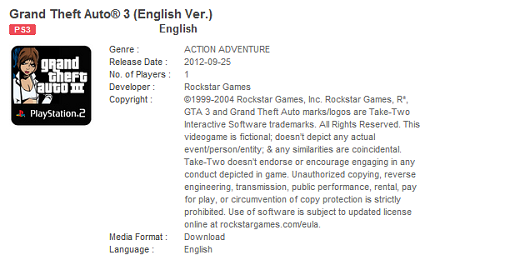 With the freedom to go anywhere and jack anyone, Grand Theft Auto 3 puts the dark, intriguing and ruthless world of crime at your fingertips, if you have enough guts to take it. Access to special features require internet connection, may not be available to all users, and may, upon 30 days notice, be terminated, modified, or offered under different terms.