The bugs and the terrible console optimization might be Cyberpunk 2077’s biggest issues, but they’re far from the only issues. One way CDPR’s open world RPG has disappointed a lot of players is with its open world, which many have called out for feeling hollow and lacking in immersion, especially compared to what the pre-launch marketing and hype for the game suggested.

Over the last couple of weeks, we’ve taken a look at a few recent open world titles and talked about how they compare to Cyberpunk 2077 as far as immersion goes, but the one open world game that Cyberpunk has been compared to most often is, of course, is GTA. Before the game launched, players were hoping that Cyberpunk would provide a futuristic GTA-esque open world setting to mess about in. That, of course, did not end up happening, but how big is the gap between the two exactly? Let’s take a look.

Water physics might not be the most crucial element in most games, but they can add to immersion significantly. This is one of those areas where Cyberpunk 2077 falls short. Shoot at a water body in GTA 5, and you’ll see proper splashes when the bullet hits the water. In Cyberpunk 2077, you may as well be shooting at thin air.

NPCs in Cyberpunk 2077 world are hollow shells who have either very disappointing reactions to the things you do, or completely inappropriate ones. Every single time you punch an NPC, they’ll simply run away, while others in the vicinity will simply vanish the moment you take your eyes off them. Things in GTA 5 are much more dynamic, and from people getting immediately knocked out to running away to even responding in kind with punches of their own, punching an NPC can result in several different things.

JUMPING OUT OF CARS

GTA 5’s physics engine is, to this day, one of the best we’ve ever seen in an open world game (which can be said of most Rockstar games, actually). Cyberpunk 2077, on the other hand… well, it has a physics system… we think? Exhibit A- jump out of a moving vehicle in GTA 5, and depending on how fast you were going, you will see different animations, physics, and even damage to yourself. In Cyberpunk 2077, no matter how fast you were going, every time you jump out of a moving vehicle, you will simply land on your feet with nary a scratch on you.

Ever tried doing a burnout in a car in GTA 5? Of course you have. You’re treated to awesome smoke effects and audio, and if you keep doing it for long enough, your car’s rear tires will eventually burst, and the rims will begin producing sparks against the ground. Burnouts in Cyberpunk 2077, on the other hand, are wholly unsatisfying. The rear tires produce smoke here as well, but it doesn’t look nearly as good. More disappointingly, that’s all that doing burnouts does. Your tires don’t burst or even get damaged.

Cyberpunk 2077’s driving AI is ridiculously bad, in that it almost doesn’t exist. There’s zero pathfinding here. In GTA 5, if you park your car in the middle of the road and walk away, other cars will simply drive around it- you know, like cars do. In Cyberpunk 2077, on the other hand, if you block traffic, cars will just remain stationed behind your vehicle. Forever. Till the end of time. Even if there’s acres of space around the blockage to drive around. 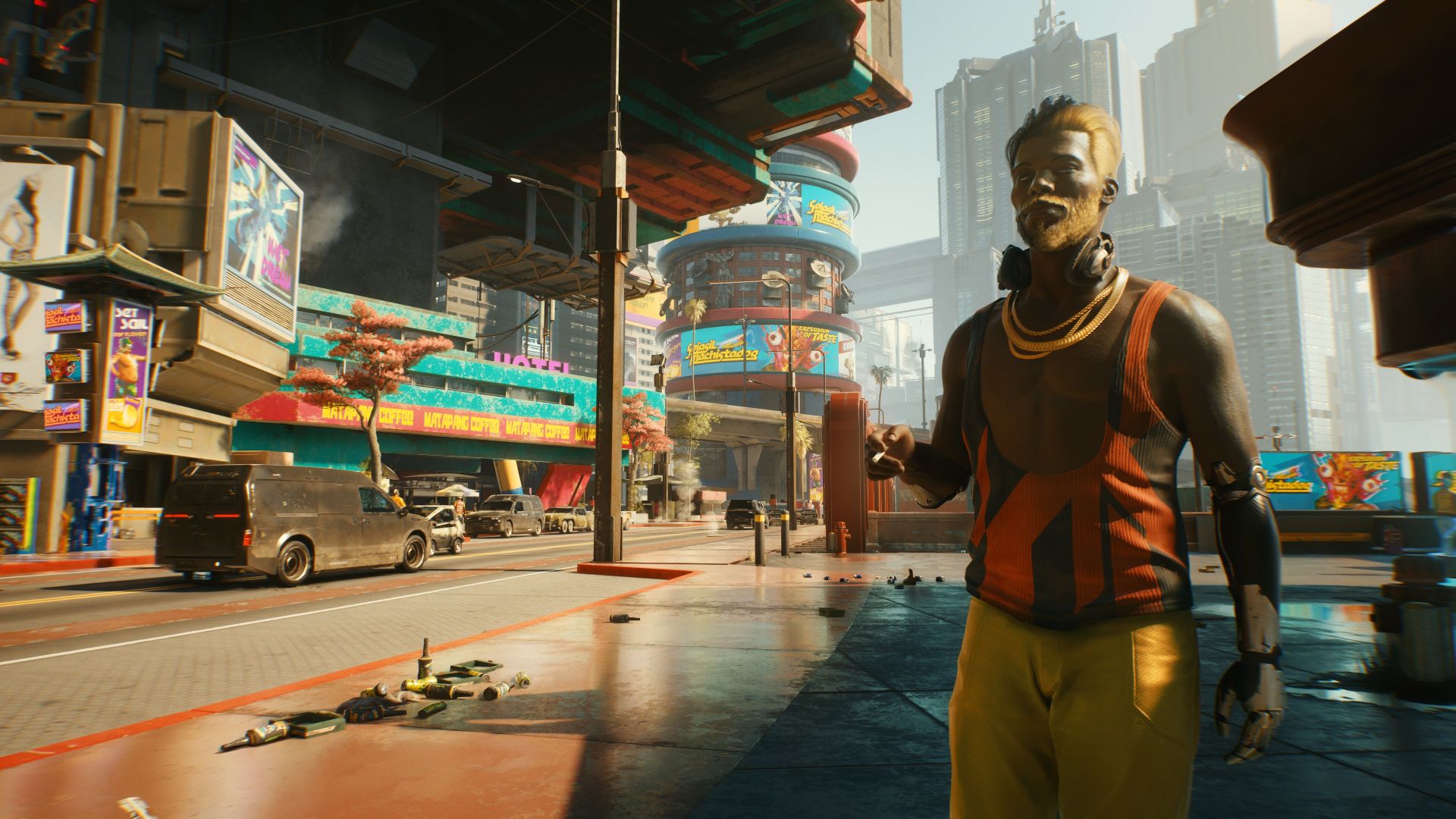 Similarly, try standing in front of an oncoming vehicle, and you’ll see the same results. NPC drivers in Cyberpunk 2077 will come to a stop of you’re standing in their way, and will be all too happy staying there endlessly while blankly staring in your direction. NPCs in GTA 5, on the other hand, will scream at you, hurl curses your way, and eventually lose patience and, once again, like normal people, simply drive around you.

This is one area where Cyberpunk 2077 at least does the bare minimum at times, but still falls way short of things that a nearly decade-old game does. Point a gun at a driver while standing in front of their car and, appropriately enough, they will look visibly afraid. If you shoot at the car, they will decide to get out of their vehicle and run off. In GTA 5, however, once again, things are much more believable. If you point a gun at a driver in GTA 5, they could do anything from abandoning their vehicles and running away immediately to instantly running you over in a panic.

Aiming guns at pedestrians produces the exact same results. Point a gun at an NPC in Cyberpunk 2077, and they’ll put their hands up and look appropriately scared. Start shooting, and they’ll bolt, though other NPCs in the vicinity will (once again) simply vanish as soon as you take your eyes off them. Meanwhile, in GTA 5, if you point a gun at a pedestrian, they’ll have the far more appropriate reaction of immediately running away. In fact, every single NPC in the area will run off as soon as this happens.

This is one point that gets brought up all too often. The police AI in Cyberpunk 2077 is absolutely terrible, to the extent that the Wanted system may as well not even exist. The moment you commit a crime in the open world, the police will simply spawn on your location, right behind you. If you try and escape, you’ll find that there’s no challenge involved, and putting even the tiniest bit of distance between yourself and the cops will lead to them giving up the chase within seconds. In GTA 5, on the other hand, cops are highly competent. There are proper, dynamic chases, multiple police vehicles will furiously chase after you, and depending on how high your Wanted level is, they’ll throw everything from spike strips to SWAT squads to even choppers at you. 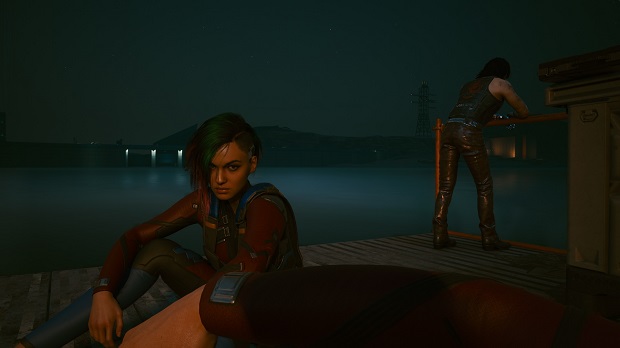 Ever noticed that there’s no real falling animation in Cyberpunk 2077? By that same token, there’s no diving animation either. Try jumping into a body of water in the game, and V will simply plop right into it like a rock. Meanwhile, even when you’re swimming, you’ll hardly ever see your hands. In GTA 5, there’s proper diving and swimming animations, giving the whole action much more weight. 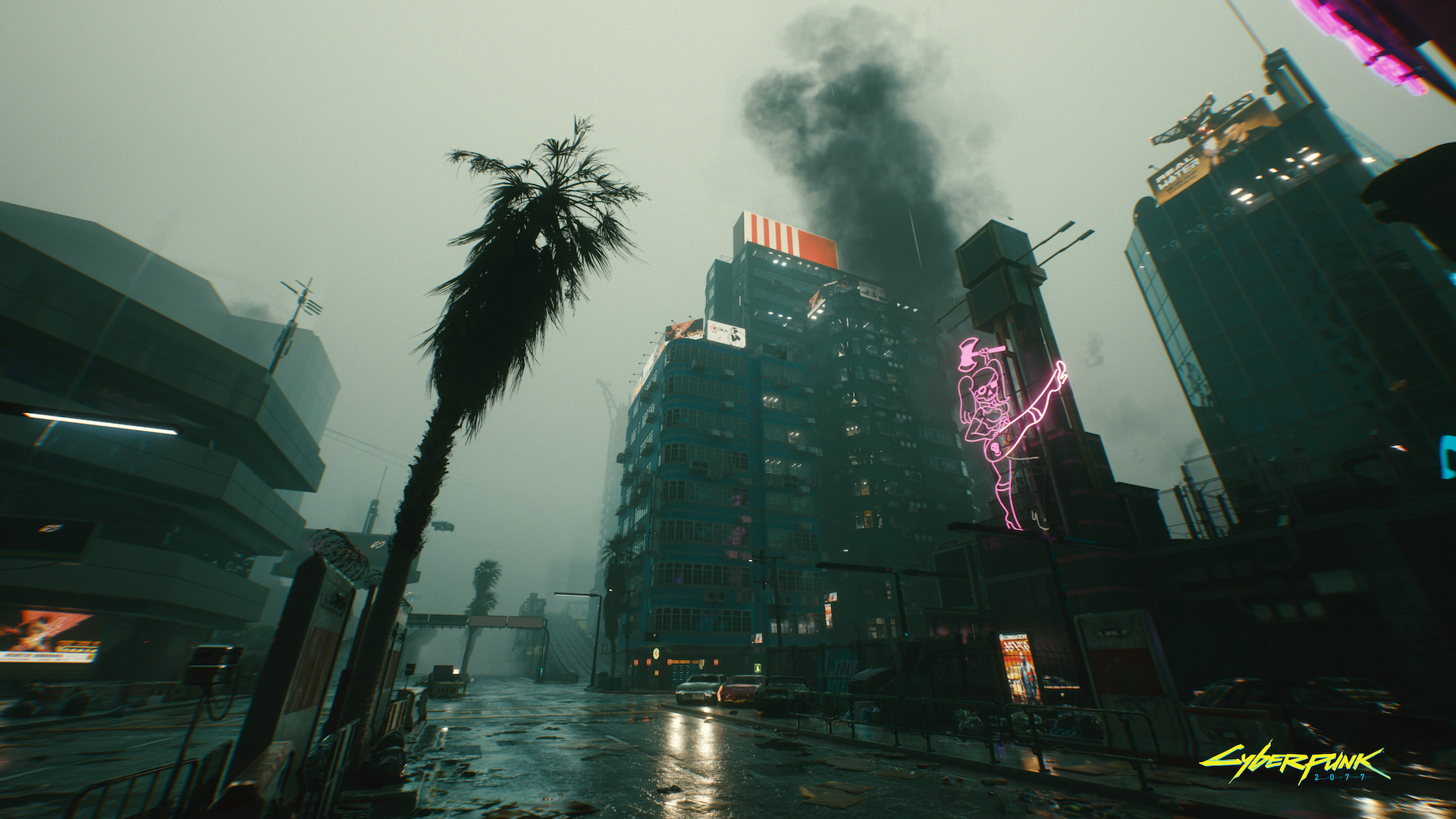 If you’re playing a video game that gives you guns and you see a pane of glass, you’re going to shoot at, right? GTA 5 makes that a whole lot more satisfying than Cyberpunk 2077. Shooting at glass surfaces in GTA 5 produces different results based on several factors. Small surfaces like taillights shatter instantly, while larger ones, like windows, take more shots to be broken completely. Meanwhile, in Cyberpunk 2077, most (though not all) surfaces shatter with a single shot, while the animations upon impact are also far less realistic. Some smaller ones, like tallights on a vehicle, don’t shatter upon being shot at all.

Having a conversation with an NPC in GTA 5 can be an absolute joy. They have actual personalities. From outlandish and bizarre comments to witty remarks to having proper reactions if you try antagonizing them, conversations with NPCs in GTA 5 feel like, you know, actual conversations. Cyberpunk 2077 is on the complete opposite end of that spectrum. Every NPC has a generic canned dialogue, and there’s basically  no interactivity whatsoever.

GETTING HIT BY A CAR

Getting hit by cars (which will invariably happen in an open world game with cars) in GTA 5 can have wildly different results, and thanks to the game’s excellent physics engine, it can lead to anything from taking a slight stumble to getting absolutely walloped and smacked into the road. Meanwhile, Cyberpunk 2077 has one single canned animation that the game triggers every time you’re hit by a vehicle, with no regard for things such as speed or the direction of the impact.

Again, if you’re playing an open world game with cars, you will run over pedestrians. It’s an unspoken rule. Sadly, it’s far less enjoyable in Cyberpunk 2077 than it is in GTA 5. The latter uses the ragdoll physics of its excellent engine (which we’ve mentioned a few times by now), while the former has extremely unsatisfying and often hilariously bad collision animations. 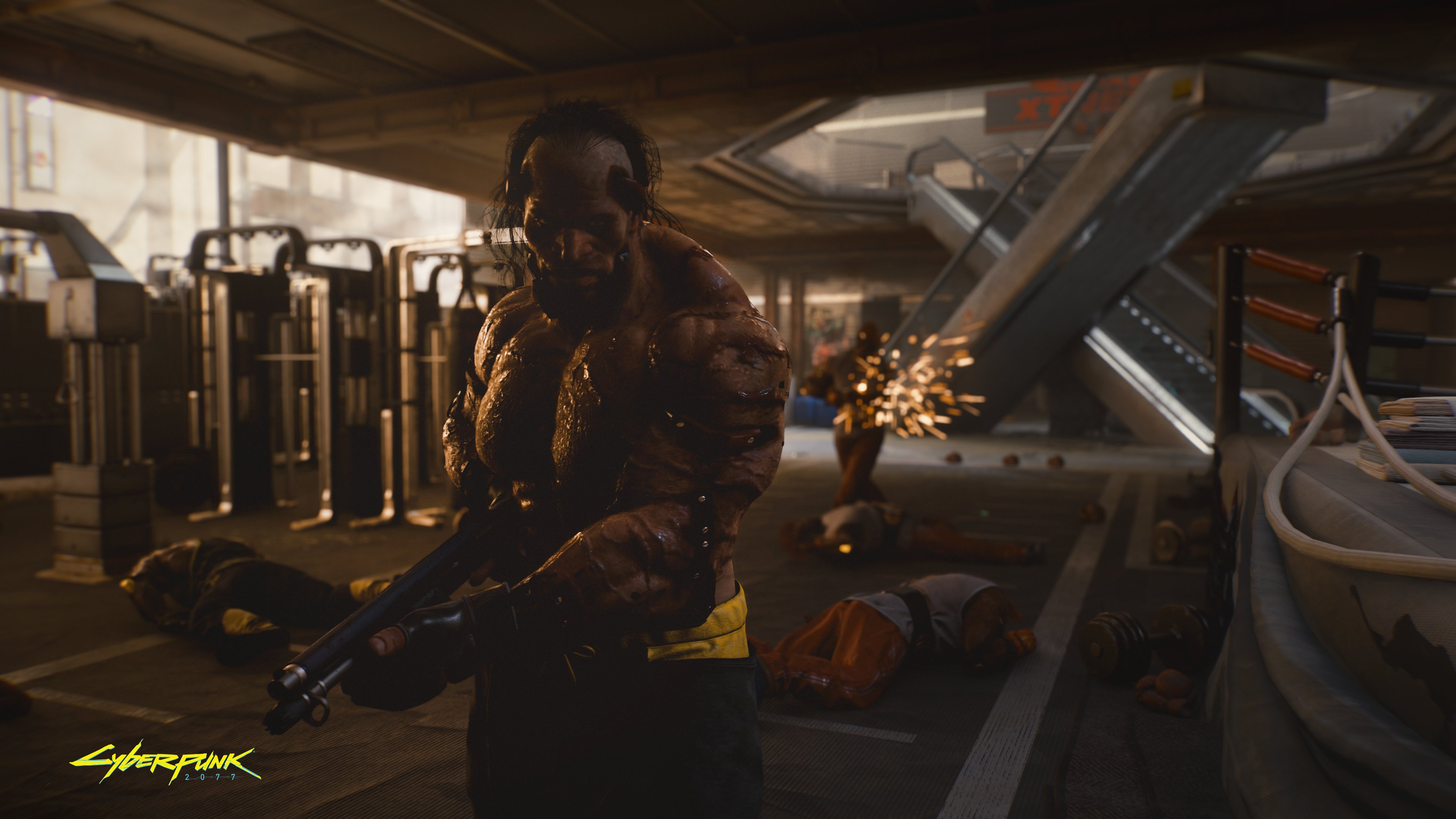 Yet another example of both, the terrible pathfinding in Cyberpunk 2077, as well as its AI being as dumb as a sack of bricks. If you park a car on a sidewalk in GTA 5, NPCs will simply walk around it and keep going (like normal people). Do the same in Cyberpunk 2077, and NPCs will be absolutely stumped by your evil genius. They’ll take one look at the car, stop, turn around, and start walking in the other direction. 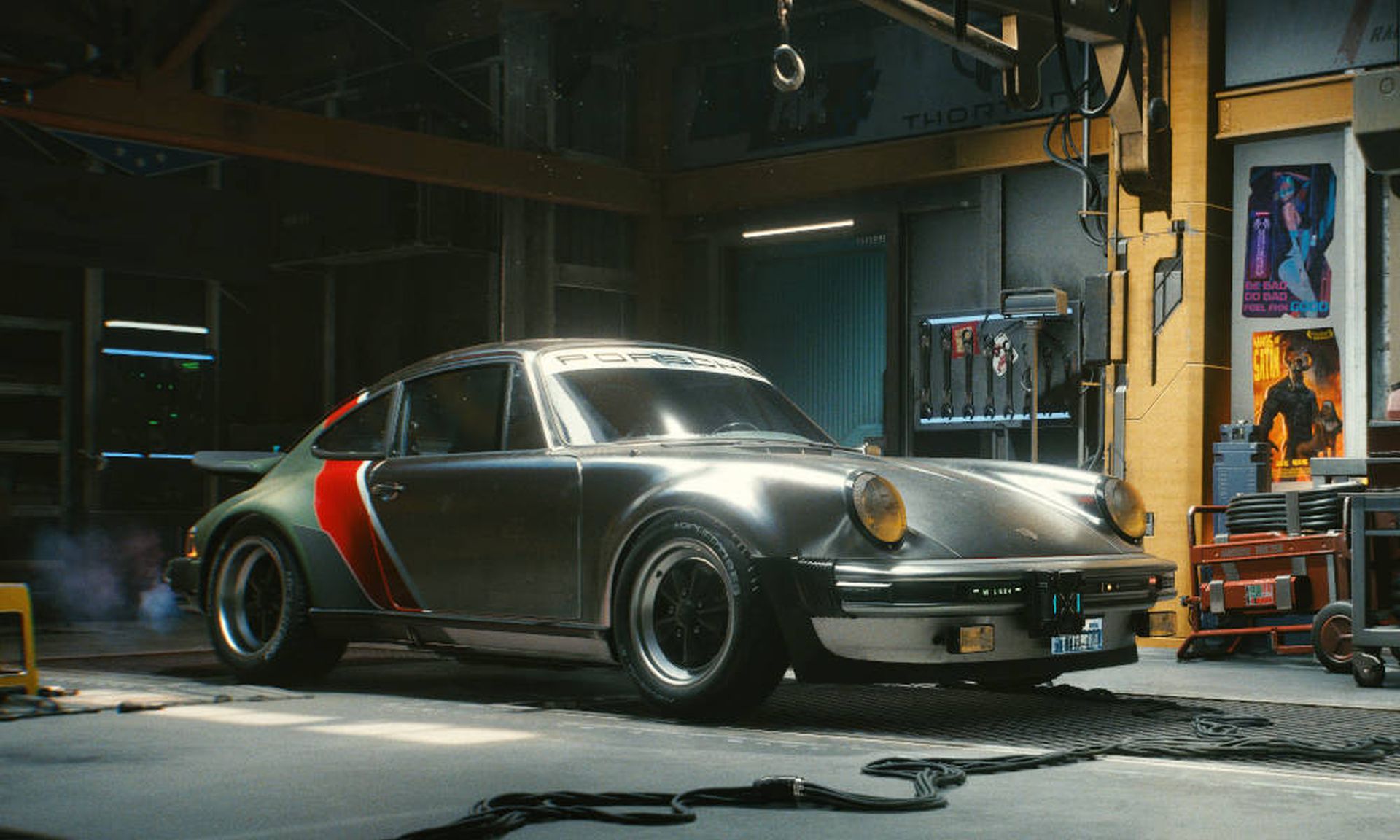 Try shooting at car tires in GTA 5, and you’ll see expected results. The tires will burst, obviously, as they should. As you may have guessed, that’s not what happens when try shooting car tires in Cyberpunk 2077. What does happen? Nothing. Nothing happens. Just like shooting at water in the game, you may as well be shooting at thin air.