Drinkbox's latest iconic entry in the Guacamelee! series is an absolute blast of colour and fun.

Amid its colourful demeanour, Día de Muertos influences and lovable take on Mexican culture, Guacamelee! 2 begins with the end of Guacamelee! Except, you’re not Juan Aguacate, scrappy luchador ascending the steps to battle the ultimate evil Calaca. Instead, it presents a relatively easy boss fight with Juan as the conquering folk hero. When all is said and done, Juan and El Presidente’s daughter get married. However, Guacamelee! 2 is only getting started. Fast forward several years and Juan is fat and out of shape. He’s still very much the conquering hero that the people respect but on top of cleverly resetting his powers, prompting the player to earn them all over again, Guacamelee! 2 re-establishes our human connection to Juan. Because for all intents and purposes, like Juan, we’re in a wild rollercoaster of colourfully epic, magically dark proportions. This initial prologue represents only a small portion of Guacamelee! 2’s heart. 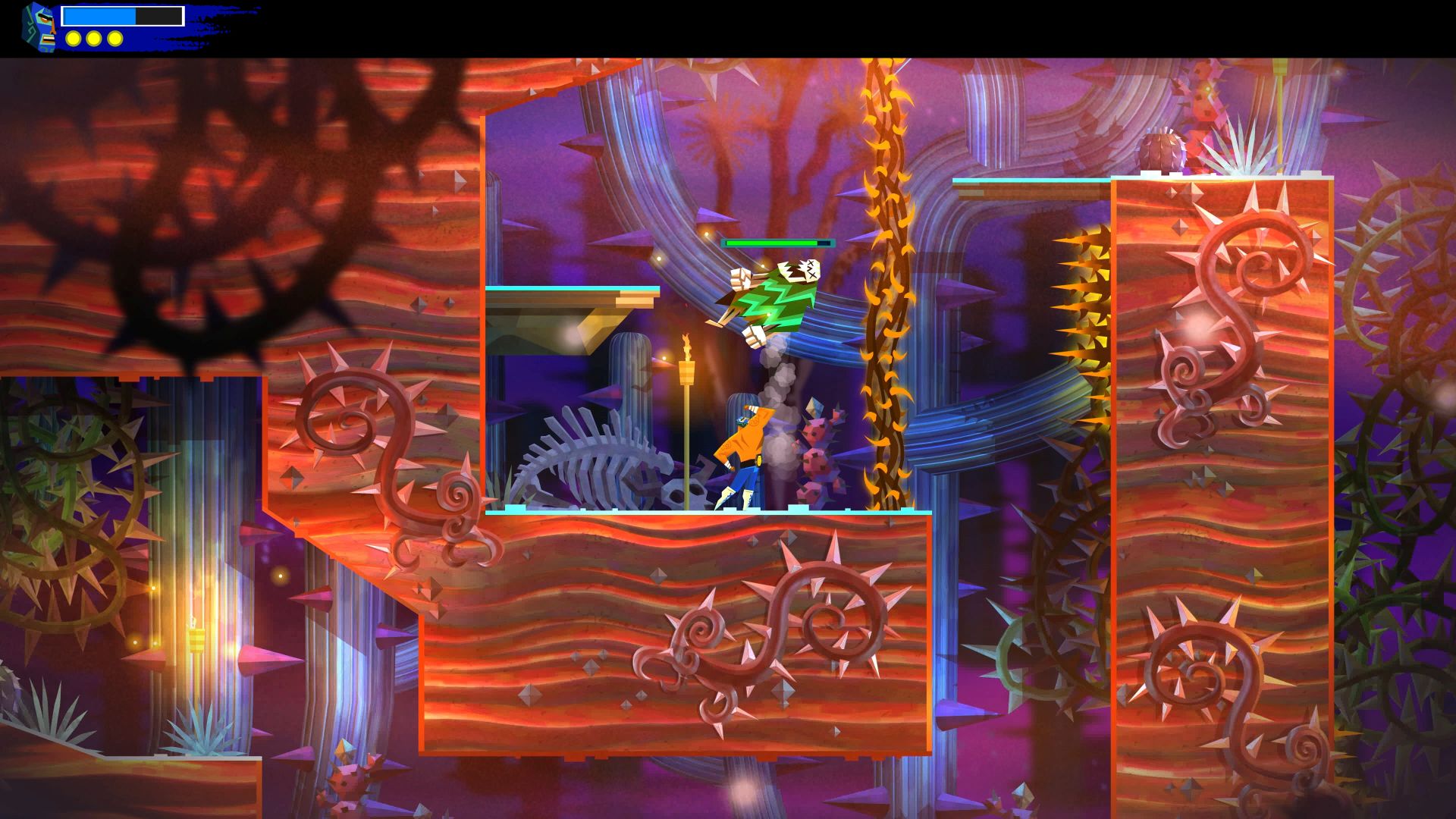 "I’d be remiss not to mention the gorgeous art-style though. Much like the first game, Guacamelee! 2‘s world is filled to the brim with detail."

What is Juan battling this time? Long story short, he’s after a powerful luchador Salvador who wants the Sacred Guacamole to gain ultimate power. This involves travelling through various timelines in the Mexiverse (yes, seriously) and wreaking havoc. It’s up to the last Juan standing to rise up and fight him in the Darkest Timeline. Thankfully, Tostada and a whole bunch of Uay Chivos, gathered across all the timelines, help Juan regain his mystical mask.

If it wasn’t obvious already, Guacamelee! 2‘s story is extremely light-hearted. Satirical references to other video game characters adorn billboards in towns (including one with Severed’s Sasha as a luchadora). There’s an Uay Chivo who’s essentially a hipster and doesn’t want you destroying his prize Choozo Statues (which are also a reference to Metroid). The game revels in this nonsense but grounds it in a compelling gameplay loop that will test your combat, exploration and platforming skills.

I’d be remiss not to mention the gorgeous art-style though. Much like the first game, Guacamelee! 2‘s world is filled to the brim with amazing detail. Various environmental objects like clouds, rocks and water may come across as simplistic but they’re elegantly combined and splashed with plentifully vibrant colour. Whether it’s shades of purple depicting a dark atmosphere or mood lighting that lends some levity to a council scene, Drinkbox’s sheer dedication and craft is on full display.

Heck, even the character designs, be it old faces like Flame Face and Jaguar Javier or new ones like El Muneco and his cavalcade of chickens, look great. The animation work is similarly stellar with a silky smooth frame rate. There are no qualms to be had with Guacamelee! 2‘s art-style, even if you’re not a fan of 2D platformers. The same could be said of the music which ably embodies the practice of Pasodoble while ensuring enough Spanish trumpets, Flamenco guitars and deep drums to keep you enthralled. 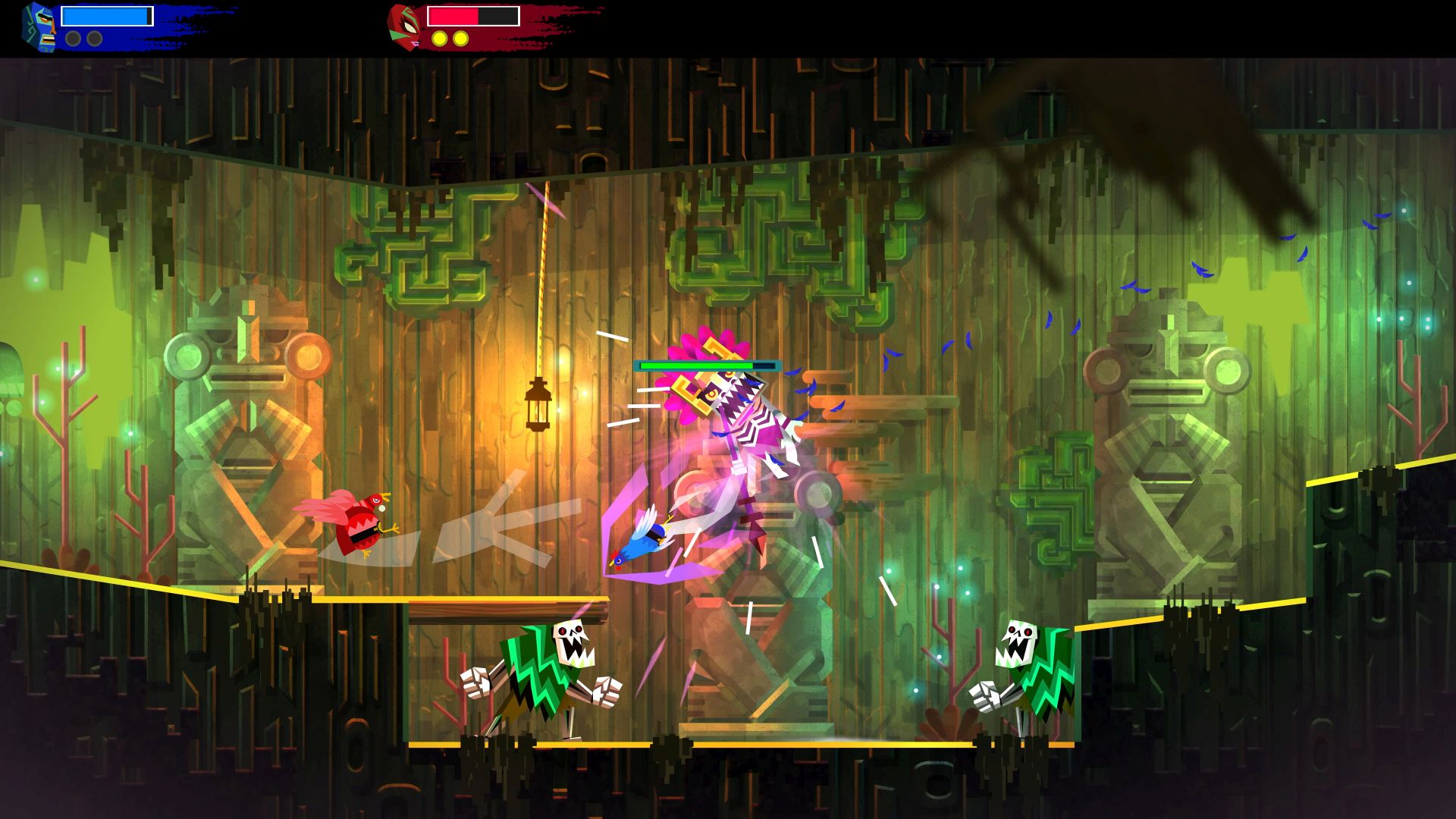 "The main strength of Guacamelee! 2 is how it ties all this together while remaining fresh and fun."

Much as I want to gush on about the art-style and music, the lovable characters and the bombastic yet comfortable humour, there is a strong Metroidvania-style core to Guacamelee! 2 as well. You know the drill – explore fantastical environments, beat up baddies, navigate some tricky rooms and unlock new abilities to open up new pathways. Drinkbox doesn’t deviate too far from this formula as much as implement neat little twists.

Many sections are seemingly lacking in enemies and instead places them in “Lucha” sections where the player is locked into a single screen. Enemies spawn in and the player must defeat them all. It kind of mimics the sensation of actually being in a wrestling ring, taking on all comers as you dodge and combo them into oblivion. Also, like the first game, Juan will battle enemies across two planes of existence. Only by crossing between them can certain enemies be defeated or obstacles bypassed. As Juan gains new abilities (and a few familiar ones like the Rooster Uppercut or Pollo Power, the latter also having unique skills), they all correspond to a different colour. Aside from destroying certain colour-coded obstacles and opening up new paths, they can also be used against enemies to build that combo meter.

The main strength of Guacamelee! 2 is how it ties all this together while remaining fresh and fun. Enemies with different coloured shields require special attacks to break them. Platforming segments can challenge you to move between the shifting Land of the Living and the Land of the Dead. One section involves navigating through a lava-filled section, except the lava isn’t present in the Land of the Dead. Properly grappling through and not getting incinerated while following the ebb and flow of the two dimensions is paramount, yet it feels fluid and responsive thanks to the excellent control scheme. In the same way with regards to combat, there’s one section that challenges you to shift enemies between the different dimensions so they can climb up and meet their spiky demise. Some platforming segments that require precise timing through insta-kill spikes and other hazards to unlock Health and Stamina upgrades. Even if you fail, be it in a combat or jumping sequence, the game instantly reloads close by and gets you back into the action quickly. 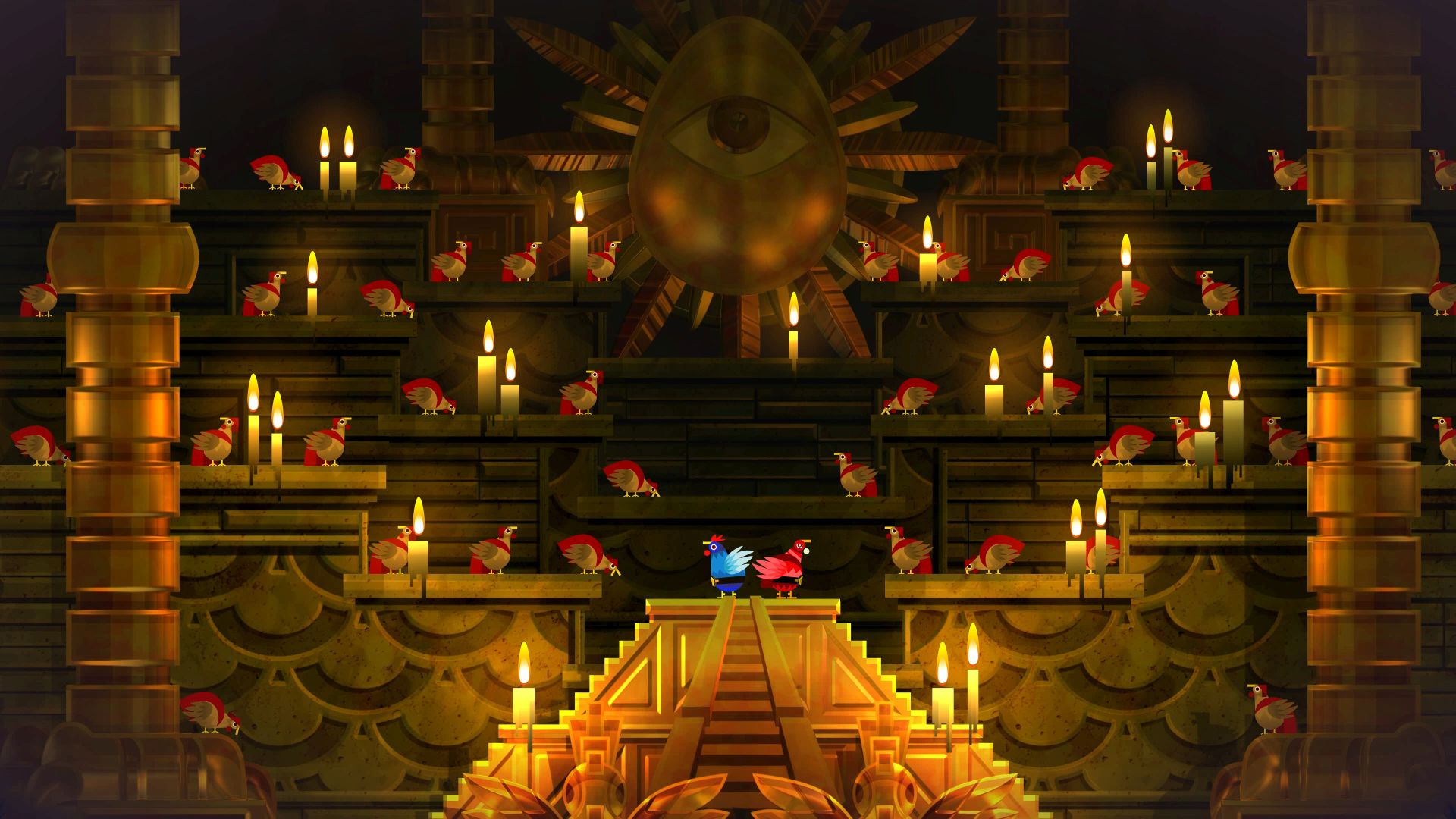 "Whether you’re a Metroidvania fan or someone looking to dig deep into the genre after games like Hollow Knight and SteamWorld Dig 2, Guacamelee! 2 deserves your attention."

Combat itself remains as compelling as ever. Juan can execute standard combos and launch enemies into the air before smashing them back down. Of course, he can also grapple foes after they’ve taken enough damage and send them into environmental hazards or other enemies. Throw in different abilities for extending combos and dodge-rolling to avoid attacks and certain enemies and Guacamelee! 2‘s combat is challenging while encouraging you towards the next encounter. Thanks to the various trainers you meet throughout the game, you gain new modifiers for your current abilities and combos. For instance, the standard three-hit combo dealing extra damage or various grappling moves like pile-drivers and suplexes can be unlocked. The standard suplex even has a “Supleeeeeeex” option which simply melted my heart. These are all unlocked by earning gold after defeating enemies but some require completing certain challenges. It offers yet another incentive to try different tactics during battle.

Guacamelee! 2‘s world does take some time to open up but even when navigating through the initial stages, it’s amazing just how large and jam-packed each location can be. I can sympathize with those who feel the sequel is overly familiar but even if it’s not significantly different from the first game or innovating the genre as a whole, Guacamelee! 2 is such a well-crafted experience. The difficulty of encounters, boss fights, combat variety, platforming sections and production values are simply irresistible.

Even if Guacamelee! 2 doesn’t revolutionize the Metroidvania genre or meld a multitude of genres seamlessly like Dead Cells, it is a stellar addition to gaming as a whole. Whether you’re a Metroidvania fan or someone looking to dig deep into the genre after games like Hollow Knight and SteamWorld Dig 2, Guacamelee! 2 deserves your attention.

Visuals are brimming with detail and colourful brilliance. Energentic soundtrack is always on point and a joy to listen to. Compelling combat offers plenty of variety while keeping encounters challenging. Fun boss fights. Platforming segments are similarly excellent thanks to responsive controls and well designed levels.

Doesn't deviate much from the previous game. Combat may be tough to get into for some players.

Final Verdict:
AMAZING
Beautifully brought to life in vivid art-style, Guacamelee! 2 is a worthy follow-up and an essential experience. It doesn't change too much but offers a satisfying and challenging adventure for even the most jaded Metroidvania fan.
A copy of this game was provided by Developer/Publisher/Distributor/PR Agency for review purposes. Click here to know more about our Reviews Policy.