Polished from a gem into a diamond before, how much shinier can it get?

Capcom might be decidedly moving away from the iterative fighting game releases as the grandfather of the ridiculous names meme, but the trend of building on top of an established fighter is still as strong as ever from Arc System Works. You can joke all you want about how close Rev 2 is creeping to the “Super ultra fighting game 2 turbo & knuckles” meme, because memes aside, the rock solid systems beneath have been polished to a mirror shine and speak for themselves.

The rocking aesthetics and metal infused soundtrack the series is famous for is of course present and accounted for. With the Revelator DLC and two new character inclusions of busty samurai Baiken and business ninja Answer, the diverse roster is up to a healthy 25 fighters. Each and every cast member has a fantastically unique feel, playable style and identity that you immediately identify through their design alone. 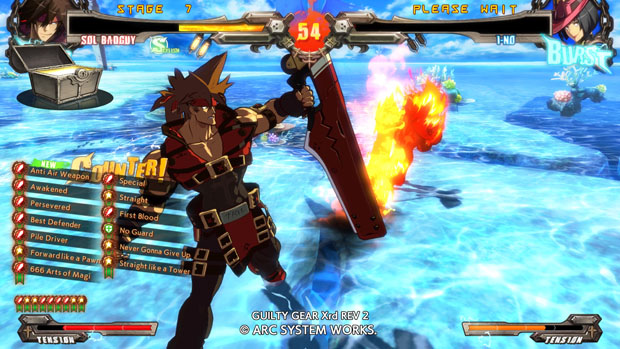 "Each and every cast member has a fantastically unique feel, playable style and identity that you immediately identify through their design alone. "

While he debuted in the story of the first Xrd game, Answer finally gets his hands dirty here in Rev 2. Fitting of his business ninja heritage, he’s a character that excels in mind games and mix ups, flitting all over the screen by jumping to business cards he’s able to place, able to get in and launch a combo and get out before his foe ever saw it coming.

Baiken is far more conceptually straight forward, but demanding of a cool head all the same. She has a suit of abilities inspired by her design, such as a devious mat block that catches low and opens enemies up to her assault if they’re not watching their own spacing. Her offensive options is balanced by lower health, demanding that the player know when to balance offence and defence to make the most of her. 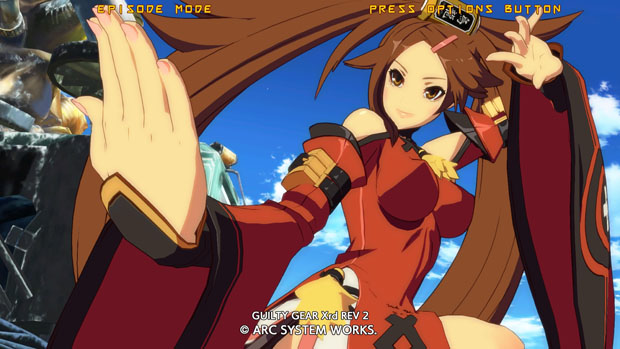 "If you meet it halfway with the training tools it provides you and learn the systems, there are few fighting games that can be more rewarding."

While there are only two truly new fighters for series fans (3 are DLC released for Rev 1), it’s really hard to knock the balance Arc System Works has managed to strike here. The newcomers tend toward being heavily technical and ideal for those players who are already intimate with the game, but the fantastic learning tools at your disposal such as challenge mode and the unqualified best tutorial in the genre still carry forward to Rev 2, somehow unchallenged by its contemporaries.

Battles themselves are high octane clashes that put a premium on being offensive and meeting your adversary head on. If you meet it halfway with the training tools it provides you and learn the systems, there are few fighting games that can be more rewarding. Rushing into and landing a crushing multi-hit combo is a rush, but using the tension gauge you built to cancel that super and immediately destroy your helpless foe with another combo is just as fantastic as it was before, with balance tweaks and new fighters giving everybody something new to learn. 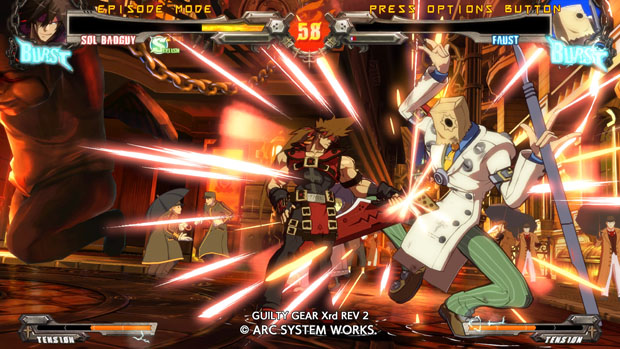 "What could easily be mistaken for hand drawn animation in a typical fighting camera angle gets freely rotated for match intros and glorious freeze frames when a match reaches its climax."

While the straight fighting is still at the top of its class, the side modes on offer have seen very little in the way of updates. M.O.M. mode is reminiscent of the RPG Abyss modes in sister series Blazblue and received a handful of new items, while the combo and mission modes that help you really dig into each of the characters bring a few new challenges each. Story mode once again, remains unplayable, instead remaining as a lengthy series of cutscenes that move the overarching plot of the Guilty Gear world forward, which is unfortunate. But the amazing art direction is leveraged to its best here and at worst, you can totally ignore it.

The wizardry of the Xrd art style is still as impressive in 2017 as well, and I would be remiss not to mention it. Forcing a few double takes as these gorgeously animated fighters burst forth from the screen as what could easily be mistaken for hand drawn animation in a typical fighting camera angle gets freely rotated for match intros and glorious freeze frames when a match reaches its climax. Active lighting effects that not only reflect off the fighter that launches a move, but the one that eats said move brings an amazing third dimensional feeling to matches in a small way, with great effect.

Yet, for all the fun I had with Guilty Gear Xrd Rev 2 there is the nagging fact that for those who jumped in long before, there isn’t a lot of new to dig into here. When I consider it as a $20 DLC for Rev 1, with myriad balance tweaks on top of the pair of newcomers, I still struggle to give it an unqualified recommendation. For the total newcomer, Guilty Gear Xrd Rev 2 is an amazing value that with its suite of colourful, fantastic characters and amazing training options will make a fighting game enthusiast out of anyone.

Amazing cast of characters, including two newcomers that series faithful will love digging into. The art direction is still quite stunning and the in depth training options are second to none in the genre, introducing players competently into one of the most in your face examples of a fighting game, and allowing them to excel.

There’s not a lot of additions beyond the characters for returning players.

Final Verdict:
AMAZING
Guilty Gear Xrd Rev 2 remains just about the final word in the genre for balance, fighting systems and training modes. Literally the one major stumbling block for this entry in particular is how little it actually offers returning players. Anyone yet to try the Guilty Gear series who enjoys fighting games owes it to themselves to check out Xrd Rev 2.
A copy of this game was provided by Developer/Publisher/Distributor/PR Agency for review purposes. Click here to know more about our Reviews Policy.