Activision is back and in your face with devil horns in the air praising the stars of Rock - well, sort of anyway. GUITAR HERO 5 has arrived with 85 songs from various artists.

GUITAR HERO 5 has arrived with 85 songs from various artists. First off, being a musician myself, I can appreciate all types of music. But there is a formula in place that needs to be followed to keep people on their feet and moving, rather than heading out to the lobby to check out what’s available to t-shirts. Now don’t get me wrong, I realize that groups I personally like to listen to, like Mudvayne, Bullet for my Valentine, Slipknot, just to name a few would not be around if not for the pioneers of music from back in the 1950’s and 1960’s and so on.  But what gets me is when you get songs to play like Nirvana’s ‘Smells Like Teen Spirit’, with guest star – the late Kurt Cobain, then get to turn around 180 degrees and play through a Johnny Cash song, I pretty much loose interest. In the career mode, you start with a small amount of songs available to play in a couple different venues. As you completed songs and earn stars, you unlock additional songs and venues. 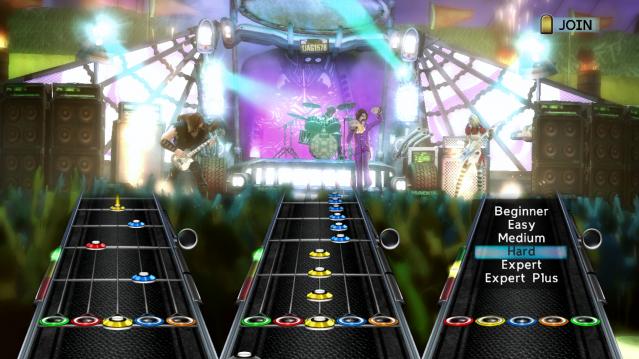 Now, all the original characters are back, Axl Steele, Johnny Napalm and the rest of the crew. In addition, and my favorite, Xbox 360 gamers can import your Xbox Live Avatar and create a ‘all-avatar’ band to rock with. This in my opinion is great for comedic value as my avatar doesn’t do a whoe lot normally but play with a radio controlled warthog on my dashboard. So to see him shred the guitar or drop beats on the drums is a great plus to this game.

The first thing you notice that comes with each song is an additional challange. It can be a number of different tasks, specific to one instrument, or requires an entire band to complete. Each challange gives you the opprotunity to achiev  up to three additional stars for that songs, depending on the level of that chalange completed. They are ranked Gold, Platinum & Diamond, challanges can be anything  The cahllange can be anything from how many seconds the whammy bar is used, ‘up-strum’ only on the bass, or consecutive beats.notes hit in that song.

Party-Play has been improved this time around, when playing with others in a band setting, you’re not limited to just one, singer, guitarist, bassist or drummer. You can have all four bandmates playing guitar if you wish, or two drummers and two bass players – whatever combination you desire, so everyone can play the instrumen they’e most comfortable with. Also, jumping into a band during a song is flawless now with the ability to join at any time, without having to start over or pause. 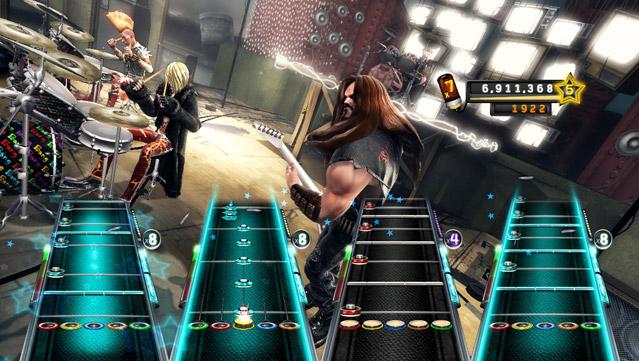 The music studio has been revamped to make it much easier for those who wish to take the time to create your own playable tunes for the game. Now it’s not so simple that you can creat a song in just a few minutes, it still takes, time and patience to get it just right, but there just seems to be a little bit more assistance this time around than in the World Tour edition.

One of the biggest changes I noticed is the animations. In earlier GH editions, the on stage characters had too much of a ‘puppet’ thing going on. It was actually one of the biggest turn off’s for me personally. To me the those animations were best compared to the music video “Land of Confusion’ by the group Genesis. Those of you who are unfamiliar, I suggest searching ‘You Tube’ and check it out. Another option is to just imagine a poor cunstructed set for a high school musical or play. This improvement alone is well accepted, espacially when the likes of Shirly Manson, Santana, Kurt Cobain, and Johnny Cash take the stage.

The set list is the norm for the Guitar Hero franchise with e wide range of songs from different genres. Songs from A Perfect Circe and Iron Maiden, and expanding down to artist like David Bowie & Bob Dylan. Downloadable content from the World Tour edition is compatible with GH 5 to expand the set list.

Now the big bulet point – if you purchased GH5 from a Gamestop store, or online during the period of September 1st through September 30th, you are eligible to receive the currently unreleased Guitar Hero:Van Halen for free. If you missed out, don’t fret, the game is slated for regular retail release on December 22nd.  I personally have received confirmation that my copy has been processed and is being shipped, so check back later this month for a review/preview.

Ability to have more than 1 guitarist, singer, drummer, bassist at a time. Seamless jumping into songs with other members, Aatars take the stage

Wide arrangement of music, some genrea may set you off, customized instruments a little deeper than neccesary, music studio still takes time.

Final Verdict:
SUPERB
Guitar Hero 5 is, to put it simply, a great game.
A copy of this game was provided by Developer/Publisher/Distributor/PR Agency for review purposes. Click here to know more about our Reviews Policy.