Gunfire Reborn tries to do a lot of things, and while it doesn’t do anything incredibly well, it’s fun enough to provide a bit of entertainment along the way.

When you have a genre as popular as roguelikes and roguelites, alongside the tangential time loop trend, you’re bound to start getting more and more spin-offs and experimental games within that framework. Gunfire Reborn falls into the latter category, combining a familiar roguelite structure with a Borderlands-esque first person shooter. Originally released on PC in 2021, Gunfire Reborn is now making its way to consoles, bringing with it both the gameplay that has made it successful on PC and the flaws that hold it back from being a top-tier roguelite. While it’s not always the most logically consistent, nor is it as deep or diverse as it seems to think it is, there’s a lot to like about Gunfire Reborn, especially if you have a group of people to play with.

Gunfire Reborn comes from Duoyi Games and knows exactly what it is and what it’s trying to do. As a textbook roguelite, it doesn’t have a complicated story to follow, nor does it put much effort into explaining how or why you keep coming back to life when you die. All you know when you begin is that you’re an animal with a magical power to do so, and you need to kill all the bosses in your way. It’s an uncomplicated setup that doesn’t get in its own way, and I appreciate that it doesn’t try to do too much in its story. Along the way, you can see some more lore, particularly about the bosses, if you look for it, but you can ignore it all if you’d like.

"While it’s not always the most logically consistent, nor is it as deep or diverse as it seems to think it is, there’s a lot to like about Gunfire Reborn, especially if you have a group of people to play with."

After a brief intro sequence, you’re sent into Gunfire Reborn’s core loop. Like others in the genre, the structure consists of a sequence of increasingly difficult rooms of normal enemies followed by a boss. Gunfire Reborn doesn’t change up the formula here almost at all. There are four acts with three or four stages before each boss. Sadly, unlike many others in the genre that prioritize replayability, stages aren’t procedurally generated, nor is there a huge number of different stage layouts within each act. What this means is that you’ll be playing the same environments repeatedly, and it definitely starts to get a bit stale, especially when you’re grinding to get through to later acts and have to replay the same early stages every time.

Though structurally a roguelite, including a skill tree that provides permanent upgrades, Gunfire Reborn’s moment-to-moment gameplay is a first-person shooter, and it takes a lot of cues from games like Borderlands, as well as other roguelites like Hades. You begin with a weak starting gun, but over time you acquire new weapons through enemy drops or treasure chests. Weapons range from the fast-firing SMGs to long-distance snipers, as well as special weapons like the Thunderbolt gloves. In the vein of Borderlands, each weapon has a bit of a personality. Some have elemental effects like shock or corrosion, and most have some kind of incremental effect, such as a 20% higher chance of a critical hit. One weapon, the Concealed Ammo, even can be thrown like a grenade.

One area where Gunfire Reborn falls just short is in the actual feeling of its gunplay. While there are theoretically a ton of unique weapons, after a while you only tend to notice the dozen or so weapon archetypes, and you’ll probably choose one or two as your favorite. The SMG types tend to feel the best because of their fast fire rates, and I usually paired an SMG with a semi-automatic crossbow. Many of the other guns lack a similar punch, so I rarely chose them over my existing loadout, even if they were slightly more powerful. There’s a similar disconnect in the game’s movement. Many of the enemies you fight will require you to be mobile and avoid staying in one spot, but while there’s a requirement to be mobile, it’s not as mechanically encouraged as you’d hope. 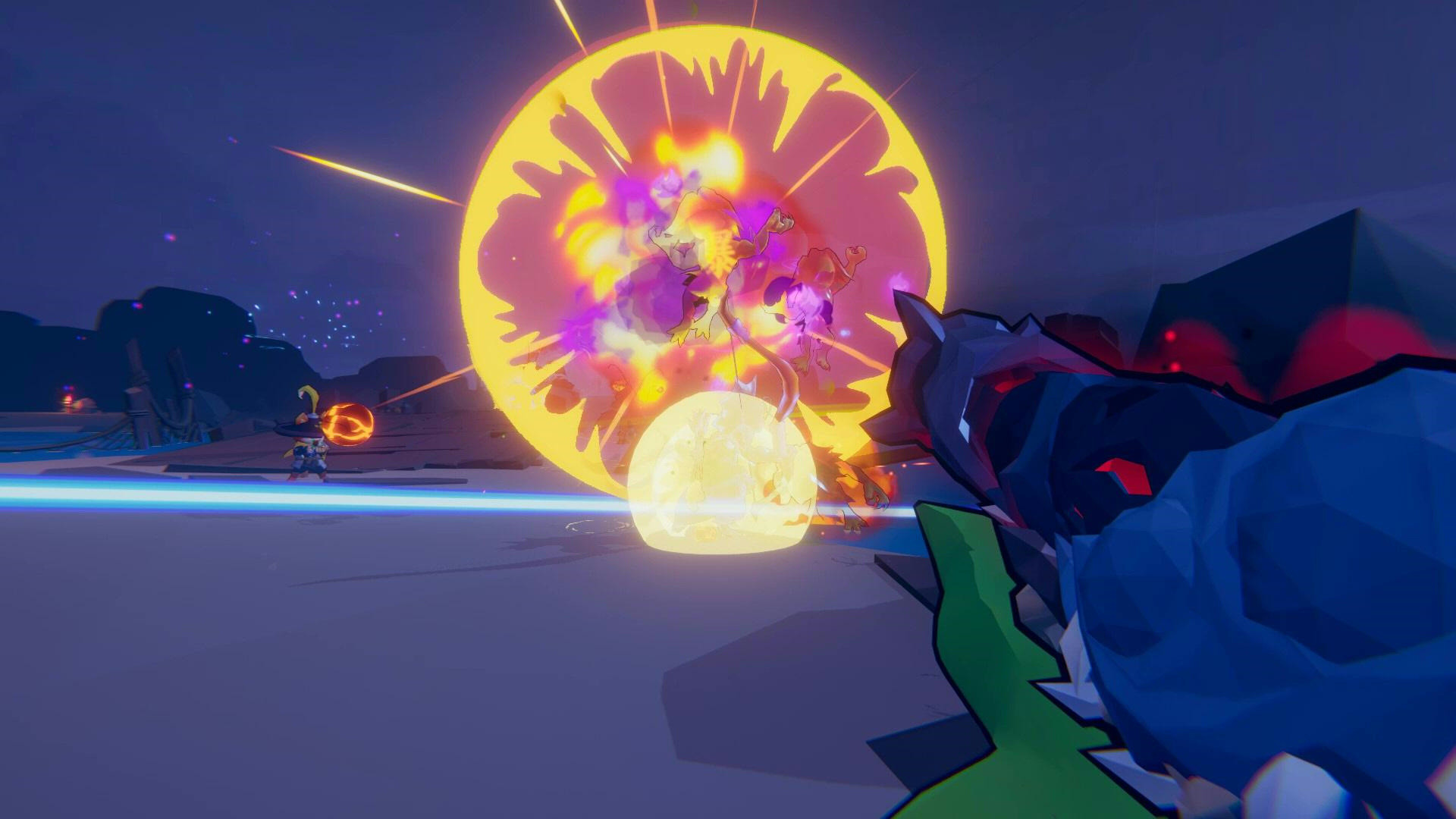 "Many of the enemies you fight will require you to be mobile and avoid staying in one spot, but while there’s a requirement to be mobile, it’s not as mechanically encouraged as you’d hope."

You don’t move particularly quickly regardless of hero, and the only move you have for changing speed is your dash, which is short and insubstantial. Environments are often not quite as conducive to free movement as I would’ve liked, as I found myself frequently running into corners and being cornered. Even changing guns can feel slow, requiring a couple button presses and a second or so to get to the weapon you want, almost discouraging you from quickly changing weapons. It feels frequently like the game was designed as a slower, more methodical shooter, but the types of challenges you face fly in the face of that requirement, making for a game that can feel sometimes at odds with itself.

When accounting for similar guns and environments, many runs tend to blend together and feel highly similar to one another. When I think about how Gunfire Reborn compares to some of the best in the genre, I don’t feel the same type of variation that keeps it feeling fresh. The primary things that keep the game from getting too stale are the upgrades and the hero powers, which can sometimes change up the run-to-run formula noticeably. Before you launch your mission, you select one of a handful of heroes, each of whom has two distinct powers, such as a smoke grenade or the ability to dual-wield weapons. I wish more heroes were unlocked from the beginning, because they really do make gameplay feel different, but by the time I beat the game for the first time about 15 hours in, I had only two total heroes unlocked with a significant amount of work left to do to unlock the rest. At the end of each stage, too, you’re given the opportunity to upgrade one of your hero’s powers, in a similar yet less complex manner to Hades’ upgrade system.

Lastly, one of the biggest ways to change the game is through the Vault, which is an optional, more difficult level within select stages where you can acquire a more powerful scroll that truly changes the game. The powers on these scrolls can be things like gaining more weapon damage for every boss you kill or for having fewer shots in a magazine, and they can change the way you play. These Vault stages are also some of the more challenging and rewarding in each stage, though they too start to get stale once you’ve seen each layout a handful of times. 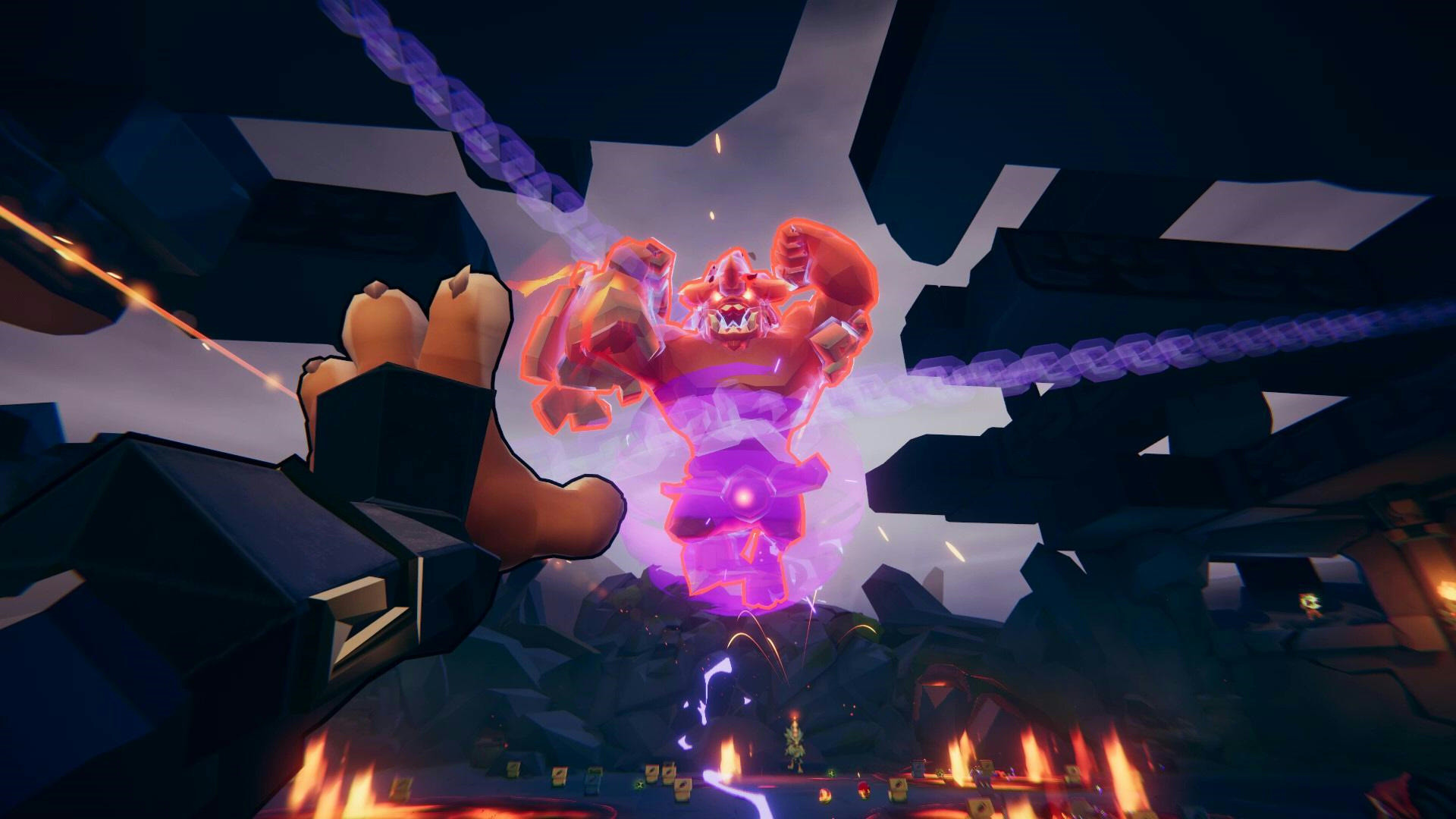 "Gunfire Reborn’s gunplay gets a little stale and inconsistent after a while, and the roguelike structure doesn’t reach its full potential due to the extreme similarities between each run. At the same time, while it can be frustrating to die without warning, there’s a lot of fun to be had."

In normal gameplay, Gunfire Reborn can be a bit frustratingly challenging at points due to the quickness with which you can die. If you’re playing solo, you can spend some of your upgrade resources to revive yourself once per run, and in multiplayer you add the possibility of revival. However, it sometimes feels as though your deaths come out of nowhere or happen incredibly quickly. You can be at full health one second and on the ground the next depending on who you’re facing, even outside of bosses. It can be frustrating to lose a run where you’re feeling confident to an unseen Longbowman on the other side of the map. For that reason, playing in multiplayer is much preferred. The game seems to be designed for solo players, as most enemies, including bosses, tend to focus on a sole person rather than everyone, and this makes it easier for a multiplayer team to succeed.

The boss fights at the end of each round have the same single-player mentality, but they are usually fun and diverse enough to circumvent the issue. The bosses themselves are huge in most cases, allowing for some scale and a great sense of achievement when you take them down. There are also usually at least two bosses that can show up at the end of each stage, allowing for a little more variety in the run, and I never found the bosses to be quite as difficult or frustrating as the interim stages, as they seem to be more balanced and better at forecasting their moves. It’s always satisfying to get the victory over one of these bosses.

Gunfire Reborn’s gunplay gets a little stale and inconsistent after a while, and the roguelike structure doesn’t reach its full potential due to the extreme similarities between each run. At the same time, while it can be frustrating to die without warning, there’s a lot of fun to be had. If you have a group ready to play multiplayer, you’ll find yourself powering through runs and doing just one more go, assuming you’re willing to look past a few glaring issues.

Final Verdict:
FAIR
A roguelite FPS, Gunfire Reborn takes good and bad from both genres, making for a somewhat frustrating and inconsistent, though intermittently fun experience.
A copy of this game was provided by Developer/Publisher/Distributor/PR Agency for review purposes. Click here to know more about our Reviews Policy.