Stefano Pinna, Founder and CEO of Forge Studios discuss some of the core gameplay aspects of this game.

H.E.L.M.E.T. Force: Rise Of The Machines is an upcoming side-scrolling platformer with brawler and action elements. From what we’ve seen of the game so far, it looks like a lot of fun to beat up robots using just your fists, and the art style immediately grabs your attention.

To learn more about the game and its development, Gamingbolt reached out to the developers with some questions, and Stefano Pinna, Founder and CEO of Forge Studios, provided the following answers. 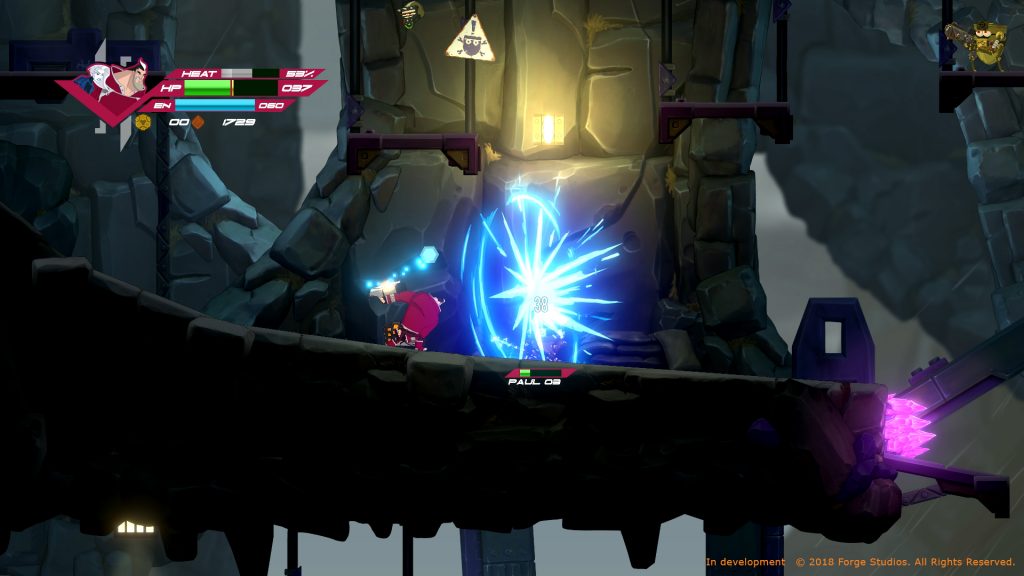 "As a proper Metroidvania or Megaman game, the player will acquire new gears defeating bosses and mid-bosses during the adventure. These gears will enable new combat solutions and new level-navigation abilities."

What is the role that Major B. Campbell’s companion AI Venus plays?

Venus is going to be the main interlocutor for Major B. Campbell over the course of the adventure. They will be chatting from time to time and comment on the situation, dangers and enemies around. Venus is also in charge of keeping the Gauntlets 9000 up and working. Through her the player will be able to upgrade the various gears while pausing the game, and the menus are realized to match her appearance. Later in the game she will also get a support role in combat.

To sum up, Venus has both plot and gameplay related roles in the game.

What can you tell us about the setting of the game?

The adventure takes place in the Fortress of Doom, lair of the Baroness MadHead, used to craft the army of mechanical minions. The fortress will confront the player with environments that differs in gameplay and aesthetics. Currently the game is split in 5 main areas containing numerous sub-areas. Our heroes will explore the external walls and the underground mines at the bottom of the Fortress up to the factories and research labs where the mechanical minions have been assembled. These are just an example of the areas that will be exportable in the final game.

What can you tell us about the game’s story?

I’ll give you the premise of the story that sees the H.E.L.M.E.T. Force HQ falling to a surprise attack from the army of minions just assembled by the Baroness. This is something unprecedented for the HELMET Force as they have successfully guard over global peace for years. This time however something went differently… but there is not time think about it now! Most of HELMET’s operatives are missing, probably kidnapped by the minions to serve evil purposes still unknown.

During the attack, Major Campbell and Venus where out for a mission and they only heard of the attack when it was too late.

Now they can only do one thing, infiltrate the Fortress of Doom and try to rescue any teammate still alive while trying to stop the Baroness from starting her plan for world domination.

It looks like you players will be able to upgrade their fists in the game in a number of  ways. Can you tell us more about how this system works?

As a proper Metroidvania or Megaman game, the player will acquire new gears defeating bosses and mid-bosses during the adventure. These gears will enable new combat solutions and new level-navigation abilities. To name a few, the Megaton Punches will deal greater damage while being an unstoppable attack. Only these fists will be able to break specific type of surfaces. The Electro-chainsaws will allow the player to aim in different direction, will be capable of passing through enemies and will allow the player to swing from certain point of the ceiling. These are just a couple of the gears that will be available on the game.

For each gear, the player will be able to increase damage, unlock new moves and custom effects.

What are some of the Metroidvania elements present in the game?

In pure Metroidvania fashion, the player will be encouraged to revisit previous areas with the new acquired gears, having now more skills to access secondary routes and remove obstacles from the path. Various missions will have to be cleared to unlock resources, collectibles will have to be discovered in recessed areas and hidden locations.

As mentioned before, new gears will be obtained defeating key enemies as mid bosses and proper end-area bosses.

When can we expect the game to release for the Xbox One?

We are talking with various possible partners to join forces on the development of the game. If all goes well, we look for beginning of 2020 to hit Xbox One and PC release. 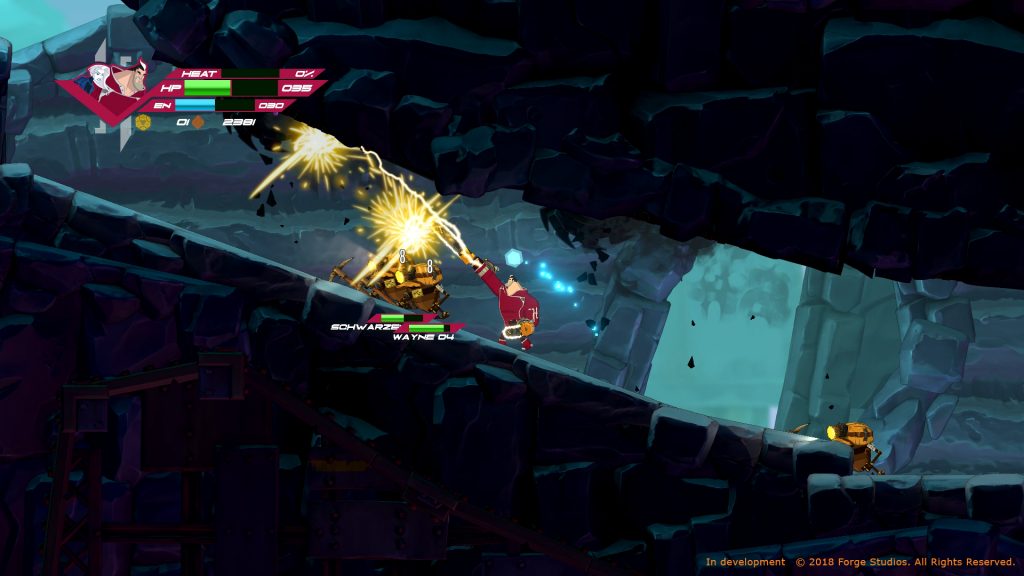 "We are crafting everything by hand checking to find the right balance between the scenario look and the gameplay situation we can create in it."

How many hours of content will the game provide to players?

We want to pack the game with all we can! We aim to deliver at least 10 hours of content for a first run with a casual approach doing a bit of everything. However, to complete all the missions, challenges and extra areas we believe it will take way more!

What are some of the major sources of inspiration behind the making of this game?

Main inspirations for the visual design are animation features like the Incredibles, Megamind, Despicable Me and Emperor’s new groove. Some of these inspire also for the theme of world domination or just for the humor and comedy vibe.

Regarding he combat system, we definitely had Guacamelee, Lords of Shadow 2 mind while layering the combat options, tools and upgrade system.

Can you tell us a bit about your approach to level design for this game?

We try to make every meter we walk as interesting as the previous one. We are crafting everything by hand checking to find the right balance between the scenario look and the gameplay situation we can create in it. We aim to provide a visually entertaining experience that feels challenging and rewarding while punching around funny little robots!

Precisely what you suggested! The game is being made with 4k Screens in mind. We aim to deliver a full HD/60fps on regular Xbox One but HELMET is going to be 4k/60fps on Xbox One X.

And the target resolution and frame rate on the base Xbox One version?

We aim to deliver a full HD/60fps on regular Xbox One.

Specs look amazing and so far we have seen amazing games running so much better on the Xbox One X. For now we are focusing on the regular Xbox One so that everything runs smooth and sharp but as mentioned earlier, we are ready to make use of that much extra power later on to boost resolution and effects! 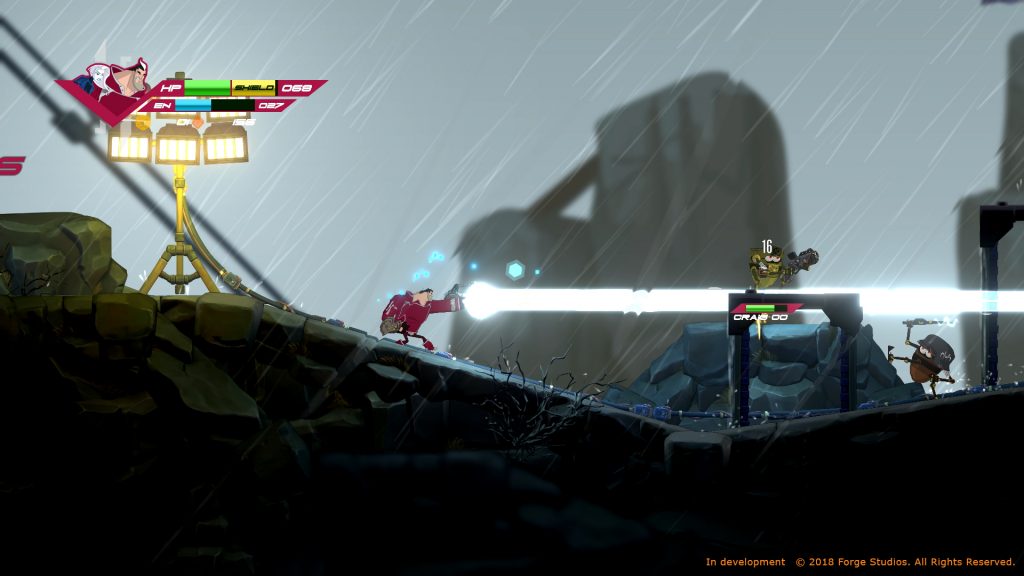 "We are talking to publishers and investors and if the right partner is found, a parallel PS4 development will look way more doable."

Is there a specific reason why the game is not launching on the PS4?

Forge Studios is a small indie team, lots of experience in making art for triple A games but after all still a small studio. We are focusing now on PC/Xbox One as the development is aligned. We are talking to publishers and investors and if the right partner is found, a parallel PS4 development will look way more doable.

We love the idea of being on the Switch! It will be a different development for the platform with much more optimization to be made. However, as for the PS4 version, with the right partner, we will do it for sure! Hopefully, we would launch it simultaneously with the PC, Xbox One and PS4 versions.

With HELMET Force we are not going in those directions for sure. We want to release a full game that has all its content in it and we are going to charge a one-time price for it. We are ok with new content being released as paid DLC but it has to be something meaningful for an honest price.

Game as service and general monetization are more for other type of games than a story driven single player experience. This said, I’m old enough to remember when everything was in the game from the beginning, extra modes and content and you would just have to put more time or more effort in the game to unlock everything…

Well, as usual, more power than ever but even more ease in developing for the systems. New solutions and ecosystems to have player enjoying your game anywhere they want. I’m sure the console makers are planning big things!

Not necessarily. I think each developer is still going to decide where he wants to put the new power available. You can steer that in higher resolution and fluidity or you can put insane amount of visual fidelity on screen and render it at lower resolution or a bit less fluid… let’s say that a current gen game, visually astonishing as a NauthyDog game can be, would probably run 4k/60fps with new amazing tech features added… if you want more visual fidelity than that, we are going to lose either fps or resolution.

Still, at every gen change, a few years in, we are going to see amazing games!