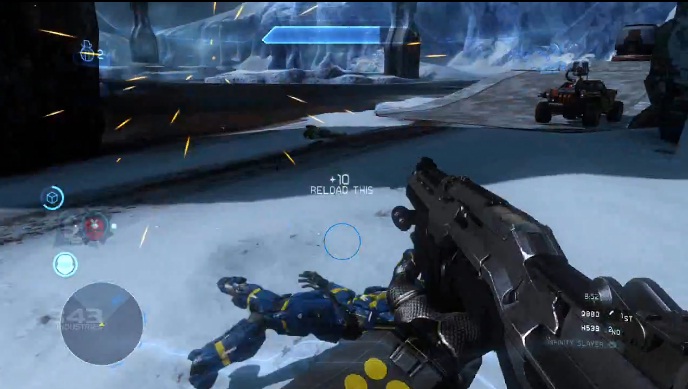 We finally know how Halo 4 shotgun will look like, and I have to say the weapon looks badass. Earlier we revealed a placeholder version of the shotgun, which gave a good idea of how the final version will be. You can check out that video over here.

The Halo 4 shotgun is a dominant close-quarters weapon specializing in boarding actions, breach maneuvers, and urban operations. Here’s what the developers had to say regarding how it feels while using it.

Frank O’Connor – “Definitely not as overpowered as it has been in the past, it’s a one shot kill at point blank range (usually) but I find it’s not quite as deadly as Reach’s in close quarter strafing encounters. I use a LOT of ammo trying to take folks down without risking swapping weapons, if that makes sense.”

David Ellis – “I’ve always been the kind of guy who loves to jump in the middle of a squad of enemies to see how many I can take out in my blaze of glory. As such, the Shotgun, if I might borrow a phrase, scratches that particular itch for me. With the aesthetic redesign, the Shotgun feels like a future bangstick designed with one purpose: to blow heads clean off their shoulders. Unlike Frank, I actually find this shotgun to be easier to use than the one in Reach, but when getting the jump on enemies, you better make that first shot count. Otherwise, you’ll be left wondering what could have been while waiting to respawn.”

Chris King – “The new Shotgun model is SICK and definitely reads as a bit more futuristic than the previous versions. It actually has a lot longer range now, less damage falloff, and is quite a bit more powerful than say the Reach version overall, but some of that dialed up power is countered by the other changes in the game like Sprint by default, mobility-based Armor Abilities, and generally faster movement speeds. This is definitely one of my favorite ordnance weapons. I especially love finding one when I have the Speed Boost in MP.”

Frank O’Connor also believes in the game and thinks it will meet expectations, and while the game won’t be perfect, it will be pretty damn good.

“It won’t be perfect, that’s impossible. We have too many constituents and variables in our game, our audience and our community for that to ever happen. But I think the vast majority of people who’ve given us their trust and confidence, no matter how warily or askance, will find something in here that meets or exceeds their expectations,” he said.

“And for the cynics, an understandable position and one we respect, I think the game may surprise even you guys. Of course time and player experience will tell, but there have been many moments that deepened my confidence in where we are. Some of those moments were big ticket brute force Rubicons, and some small, personal moments.”

Halo 4 will be released on the Xbox 360 on November 6th. Check out the new shotgun in action below.