10 years ago, Bungie and Microsoft together created what has to be one of the most revolutionary games of all time. Halo: Combat Evolved completely changed the dynamic of the market. It gave birth to proper console first person shooters, it kicked off what some call the ‘online revolution’, and it began a franchise that is considered to be one of the most prestigious and consistent franchises on the market. In celebration of its 10th birthday, 343 Industries, the new developers of the Halo franchise, have released an HD remake of the game. Is Halo: Combat Evolved Anniversary as excellent as the original game was, or has the flow of time lessened its quality?

To answer that simply, Halo: Combat Evolved Anniversary is every bit as good as the original CE, released on the Xbox back in 2001. It may not be as revolutionary (none of us expected it to be), but it’s damn good nonetheless. For those of you who’ve forgotten all about it in the course of the last 10 years, those who have never played a Halo game before, or those who were initiated into the franchise with the newcomers Reach or ODST, Combat Evolved Anniversary is an excellent game, one that you have to play, no matter what your level of love for the franchise is.

We all still remember just how iconic the game’s story was- the story of how humanity first discovered the ring world called Halo, of how the Flood was unleashed upon the galaxy, of the war between the Covenant and humanity and the terrifying Forerunners, of Master Chief and Cortana captivated and awed millions of fans back in the day. The plot is still strong today, especially now that we have played Halo: Reach, which takes place right before the events of this game. And with the addition of Terminals, which add a whole lot to the narrative experience, the plot’s more engrossing than ever. 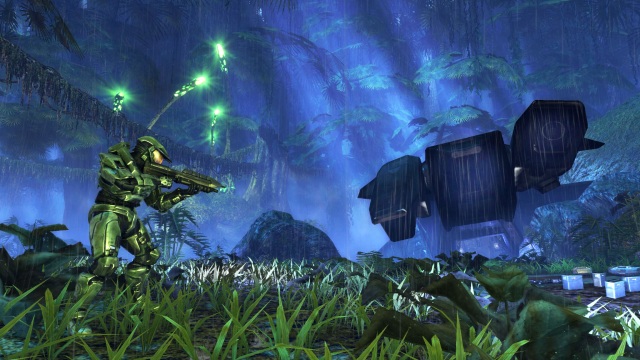 The visuals may not be the best in the genre, but they’re outstanding nonetheless.

The single player campaign is brilliant- majority of the Halo fans do say that Combat Evolved’s campaign is the best in the story, but some say that it’s not good enough to stand the test of time. For those of you who do say so, let me tell you, the campaign is still as thrilling and excellent as it was 10 years ago. The level design is still excellent (except for, of course, the infamous Library level), the enemy AI is exceptionally strong and competitive, weapon variety is exactly what you’d expect from a Halo game, and the mission structure is probably the best in series, outdoing even the final missions of Halo 2 and Halo: Reach. Action is intense, as intense as we remember it to be, and faithful to the original game. Practically zero changes have been made to the gameplay, and yet, it still doesn’t feel dated. In fact, it feels much better and much more fluid than several modern day shooters- a testament to how incredibly Bungie designed Combat Evolved all those years ago.

There is, however, the fact that the campaign can be completed in just a little over 6 hours, depending on your skill level. It’s not a very long campaign, especially for the Halo veterans. And after having completed it, there’s not much incentive in coming back, other than the Skulls and Terminals, which may not be enough to grab hold of your attention the second time over all throughout your playthrough. You can play the campaign co-operatively with your friend, but still, it doesn’t do enough to add to the replay value of the single player side of the game.

Like all Halo games, Combat Evolved Anniversary has a multiplayer component, and like all Halo games, it’s a great experience. The leveling and upgradation system from Reach has been included here, and it’s as deep, fleshed out and addictive as it was when it was first introduced in the series last year. Armour abilities from Reach have also been included, and it’s a great deal of fun to watch your opponents- and yourself- use jetpacks or armour lockups and other such “newer” abilities on maps that you remember so well from 10 years ago.

Ah, the maps- unfortunately, this is where the game falls short. Out of the total 19 maps in the original Halo (Xbox and PC versions put together), only 6 have made the cut in Anniversary. It’s disappointing to see that so many maps weren’t included in the game, many of which were unfortunate and baffling omissions. However, the maps that did make the cut are faithfully redesigned, and look extremely good. I felt a pang of nostalgia when I first saw Battle Creek (now Battle Canyon) in glorious HD. There may not be a lot of maps here, but the few that did make the cut are excellent- each and every one of them.

There’s also a single Firefight map here, based on the second mission of the game, and I have to say, it’s rather well designed. I was disappointed, as with the multiplayer maps, that there’re not more of these maps, but I was still happy with the one I got, and I’m pretty sure, this is the one I’ll prefer from now on whenever I play Firefight in Reach.

One of the biggest and best features in this game is the graphics toggling system. At the press of a button, anywhere, any time (except for when you’re watching cutscenes), you can switch to how Combat Evolved looked 10 years ago. You can play the entire game with the original game’s graphics, and this mode not only is a great addition for all the nostalgia freaks, it also shows just how much the series has evolved over the course of ten years, and what an excellent job 343 Industries has done with Combat Evolved Anniversary and its visuals. Each area in the game is faithful to areas from Combat Evolved on the Xbox, yet still beautifully rendered, and a different take.

The soundtrack was also a very iconic aspect of Halo: Combat Evolved when it was first released. To this day, people call it one of the best soundtracks in video games, and I was glad that Anniversary has an equally good soundtrack, using remastered versions of the original’s tunes that we remember so well now.

There are a few features in the games that don’t work so well. For one, some of the levels, like the first level (Pillar of Autumn) have too many corridors, and they make the game a little restrictive, something that is not expected of Halo. Then, the added Kinect voice commands are downright useless, and not needed at all. 343 could have done away with them, and it would have made no difference to the overall experience.

Ultimately, Halo: Combat Evolved Anniversary is an excellent game. Fans have been clamouring for the series to go back to its roots, and with Anniversary, it looks like they’re not being ignored. 343 Industries has done an excellent job here, making a faithful and thrilling adaptation of the game that changed our lives a decade ago. We can all rest assured that the franchise is in good hands, and I honestly cannot wait to see what 343 will do in Halo 4. Doesn’t matter if you’ve ever played Combat Evolved or not- this is a game you have to get.

Campaign still as good and thrilling as it was 10 years back; Graphics toggling feature is a master stroke; Visuals are excellent; Engaging story; Remains faithful to the original Halo; Multiplayer maps are beautifully rendered in glorious HD; Intense shootouts; Brilliant soundtrack

Campaign can be finished in a little over 6 hours; Only 6 multiplayer maps; Just one Firefight map; Useless Kinect voice commands

Final Verdict:
EDITOR’S CHOICE
Halo: Combat Evolved Anniversary perfectly illustrates that 343 Industries is more than capable of handling this prestigious franchise.
A copy of this game was provided by Developer/Publisher/Distributor/PR Agency for review purposes. Click here to know more about our Reviews Policy.