Posted By George Reith | On 15th, Sep. 2010 Under Reviews | Follow This Author @GNReith

This is the first time I’ve given a game a perfect score in my reviewing career, and I do not give this honour lightly. Halo: Reach has a few flaws here and there but, whether you’re in the campaign or the multiplayer modes, the package oozes a quality that I haven’t seen in a game for a long time and I doubt I’ll be seeing any time soon. Bungie clearly wanted to give their fans the best experience yet for their last Halo game. They have certainly succeeded in doing this and have also created what is, arguably, the greatest FPS game of all time.

I’ve immensely enjoyed all the previous instalments of the Halo franchise, but it must be admitted that there hasn’t been a huge amount of progression throughout the series in terms of the core gameplay mechanics. Reach has changed that with the game altering armour abilities that are activated with the press of a button. Invisibility, invulnerability, extra speed or agility? All of this can be yours in limited bursts and it truly alters the strategies and tactics you can employ. Confuse your foes in matchmaking by deploying a holographic decoy, place down a portable bubble shield to protect your buddies in Firefight. It all comes attached to the various load-outs found in the multiplayer modes, or in single player they are acquired and equipped in the same way as weaponry.

You’d think this kind of change would detract from the core gameplay, but it all manages to stay remarkably true to the classic Halo experience. There are several other additions you may find pleasing as well: Reticule bloom opens up the skill gap, assassinations lend an added flair to the one hit melee kills and a whole host of new weapons and vehicles (DMR FTW!) show just how far the series has come in nine short years.

This is indeed the true new sequel to the Halo franchise that ODST was not. That is, aside from the campaign, which takes place before the events of the first Halo game. The story takes place on the eponymous planet of Reach, where you play the silent protagonist Noble six who is the newest member of the elite Spartan force, Noble team. Being part of Noble team adds an interesting new dynamic to the gameplay, with the feel of being part of a team making the Reach campaign more like ODST than any of the core Halo trilogy. It is a shame then that the companion AI still isn’t fantastic, but that is largely felt in comparison to the enemy AI that is now vastly improved.

The improved enemy AI really adds to some of the games intense set pieces, and there are a surprisingly large amount of really good ones throughout. Many of them rely on tense defence sections where the covenant swarm you from all sides, flanking left and right and generally not letting up. Other sections provide you with wide open vehicular sections that are just begging for exploration. (Halo 1 anyone?) It is the frantic, fun and friggin insane gameplay that the Halo campaigns should always have had, and the newly found pacing is most certainly welcome.

The fact that the story is set on Reach seemed odd to me at first. Anyone who has followed the previous Halo games will know that Reach ultimately falls to the covenant invaders, so what’s the point of telling a story that we already know the ending too? Quite a lot actually. The fact that you control a silent protagonist, mixed with the larger than life characters within Noble team gives the story of Reach a more gripping and personal focus than ever before. The final sections in particular will bring a smile to fans of the series, and the epilogue hit an oddly beautiful chord with some exceptionally clever uses of the gaming medium. There are a few chinks in the proverbial armour here and there though. The odd fleck of lame and cheesy dialogue still rears its ugly head, and some of the more extreme plot twists lack a certain emotional weight that I felt might have improved the experience.

The campaign has its flaws, but it’s still probably the best campaign the Halo series has seen so far. It’s also still fun as hell teaming up with a mate in split-screen. It’s a shame that they couldn’t have allowed four play local co-op, but beggars can’t be choosers and at least we can still do four player online. Speaking of online, it’s nice to see the campaign mode finally get full matchmaking support. At the time of writing Bungie have stated that this won’t be active yet, so as not to ruin any of the plot. It should be coming very soon though. 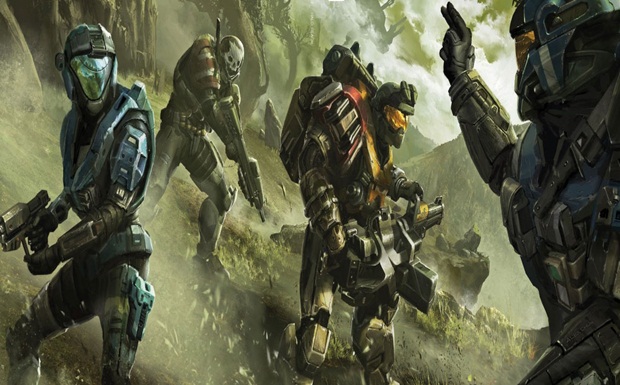 Speaking of campaign matchmaking, Firefight has also been given the same treatment. Matchmaking in Firefight is an exciting enough prospect, but you’ll be glad to know that the mode has been improved in several other ways since it first graced us with its presence in ODST. Lots of new modes have been added to the standard Firefight variant, including the timed score attack and the aptly named gruntocalypse and rocket fight. Firefight versus mode is probably the most interesting, with human players joining the waves of AI covenant to try and stop the Spartans amassing too high a score. It’s now one of the best co-op modes out there, and the fact that it’s all on the same disc is absolutely mind-boggling.

So far so good, but now we move onto the main attraction: The Multiplayer. It must be said I’m not quite sure how to word it all. It’s the best Halo multiplayer yet. By a mile. The new weapons and engine, along with the tactical armour abilities give the multiplayer a new found depth and solidarity that makes it one of the best online experiences around. It’s all exceptionally well balanced, and even if a balance issue comes up, I get the feeling Bungie will be pretty swift when it comes to patches and updates.

One of the most obvious changes is the customization elements added through the armoury. For everything you do in all game modes, and for completing a whole slew of daily, weekly and lifetime challenges, you earn credits. You can then redeem these credits in the armoury for new armour variations. It adds a nice incentive for playing through the multiplayer and the way that the armour is only cosmetic helps keep things balanced, whilst still allowing you to express your inner Spartan effectively.

Once you’ve got your custom character kitted out you can jump into the fray. The variety of weapons, abilities, maps and tactics is massive and you immediately realise that it will take months, maybe years, to get through it all. The one thing I will pick out from the experience that was noteworthy was how much improved the large scale maps are. Big team battle was a playlist I seldom entered in Halo 3, but the new epic vistas on display in the 8 vs 8 games is immense and well worth checking out. There are a total of nine maps on disc, but there are another handful of maps that Bungie have loaded on that they designed in the new forge mode to give a taste of what it can do. They are all well designed and as tight as a foxhole, and the layout makes enough sense that you’ll get to grips with it all fairly quickly.

Having mentioned Forge, I feel it is only right that I go into it in a bit more detail. Forge was a nice idea in Halo 3, but it wasn’t really the map editor we were all hoping for. The new Reach incarnation really hits the spot though and is now the most intuitive, versatile and fun creation mode I’ve seen on a console game in a long while. The new tools such as rotation snap and phased object physics now really help make map editing an easy and enjoyable proposition. The most impressive leap has to be the forge world map itself. Forget the customizability of Foundry in Halo 3, this is on a whole new level. It’s bigger than most campaign missions, and probably bigger than most open world game maps. It’s just incredible and you can section it off and tweak it as much as you want. 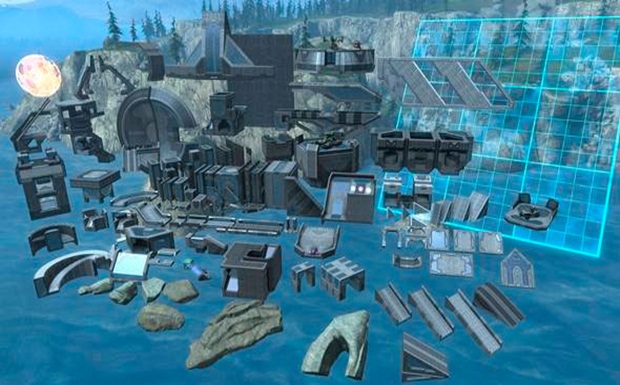 Forge is back and better than ever!

Once you’re done with your map making you’ll find the process of sharing your creations a fairly simple one. You can up and download maps, game variants, pictures and gameplay videos (yes that’s right, theatre is back as well!) and start recommending them to your friends all with a few button presses. The ability to check best rated and most downloaded content as well as the new tags system really help you find what you’re looking for. Hell I’ve almost already got recreations of all of the Halo 2 maps of old and that alone is worthy of praise and giddy laughter all around.

With such a sweet and delicious centre, it is nice that Halo: Reach has such a beautiful outer shell. It might not have the best graphics ever conceived, but the whole thing has a polish that can’t be denied. The textures are varied and smooth, and the animations are crisp to the point where there is a clear divide between this and previous Halo instalments, visually speaking. The sound is as strong as ever with the same satisfying sound effects you know and love and some solid voice acting throughout. Fans may be sad to hear that the famous Halo theme of old has taken a back seat, but it has been succeeded by a very subtle and enjoyable score that frames the campaign mode. The gameplay is what is important, but Halo: Reach is also quite the looker.

All good things must come to an end, but I’d almost describe Halo: Reach as immortal in terms of lifespan. Forget other games, this is a hefty beast indeed. The campaign itself is a good eight hours plus depending on your difficulty, and the multiplayer modes just push the scale even further. With new forge creations, updated challenges every week and day and a fun, if slightly easy achievements list, (with no bloody collectibles this time!) Halo: Reach is well worth your time and money.

If you are a fan of the series, then Halo: Reach is the definitive and most interesting game in the franchise to date. If you aren’t then it’s about time you picked up a copy and saw what all the fuss was about. Most of you won’t need this review to help make up your already determined minds but for those who need a little convincing, rest assured that Reach is a near perfect execution of a well refined formula and is easily one of the best titles available at the moment.

The best campaign yet, graphics are improved over Halo 3, Firefight is back, New multiplayer mechanics are insane, Forge world is brilliantly realised, A huge amount of content

I can't play it while I'm eating, sleeping or working, Occasionally the dialogue in the campaign isn't hugely inspired

“In my beginning is my end... In my end is my beginning.” Reach takes us back to the beginning of the Halo franchise and marks Bungie's beautiful Swan song to the epic FPS series with exciting multiplayer, the intense Firefight mode and the best campaign yet

A copy of this game was provided by developer/publisher for review purposes. Click here to know more about our Reviews Policy.
Tagged With: Bungie, Halo Reach, Microsoft, xbox 360