Halo Wars 2 is an exceptional RTS game that excels in all departments.

Perspective. Balance. Precision. Those are the three words that come to mind when playing through developer 343 Industries and The Creative Assembly’s hotly anticipated sequel to 2009’s Halo Wars. This is a game so fine-tuned it’s a wonder why Microsoft hadn’t brought out a new entry in this real-time strategy series for almost eight long years.

For those new to this series, Halo Wars 2 is not your standard first-person Halo journey. You assume command of an entire battalion of marines, vehicles, aircraft and much more, while setting your sights on a grand scale war against a legion of adversaries.

The story is as straightforward as possible: The crew of the UNSC Spirit of Fire battleship have awoken after 28 years of cryogenic sleep, and have discovered that they had unintentionally transported through slip space. Now, in an undocumented region of the galaxy, the crew discover that they are floating above a starburst-shaped installation known as the Ark. A distress signal from an abandoned human outpost on the Ark forces the UNSC leader, Captain Cutter, to send out a crew to figure out the situation.

After discovering the outpost’s A.I. known as Isabel, he is warned about Atriox, the ravenous Ark leader. Atriox’s origin comes from his hatred for the Covenant, which makes him turned into the Covenant’s enemy. Atriox’s resistance inspired others to join his cause creating an army dubbed the Banished. But for all intents and purposes it’s pretty much the Covenant by the looks of them. Now running around without rules and killing at their own discretion, Cutter doesn’t want to leave the Ark until he wipes Atriox and company out.

"Halo Wars 2 plays similarly to its prequel and is intensely satisfying when the bigger battles begin and your marines are spread thin."

Halo Wars 2 plays similarly to its prequel and is intensely satisfying when the bigger battles begin and your marines are spread thin. Understandably, there are a lot of controls to learn during the campaign of Halo Wars 2 — as most RTS-style games are best left to the PC crowd. Fortunately, they’re simple to understand and only take a mission or two to master.

The camera is an overhead display that allows you to see several meters in any direction and spin around to any angle, giving a generous look at the immediate battlefield. A quick toggle of the right analog stick allows the camera to zoom in and zoom out so you can see everything going on up close in detail or far away to see the war breaking out.

Each battle starts with a small group of marines marching across specific and often exotic locales of the Ark trying to track down Atriox and his soldiers as Atriox and his team do the same. Small groups aren’t enough to take down the onslaught Atriox has in store for Cutter’s marines so it becomes imperative to set up a base of operation to continually build-up your army larger and more powerful.

Bases construct soldiers, vehicles, aircraft, and more, but to acquire these weapons of war it takes plenty of Supplies and Power — which are ultimately Halo Wars 2‘s form of currency. Naturally, structuring a Supply Pad and power Generator within the base’s operating area will allow a constant flow of Supply and Power points to accumulate.

After acquiring enough Supply and Power points, the construction of further pads within the base (Barracks: create ground marines of various types, Garage: create Warthogs and other ATVs, and Airpad: create various airships) become vital to winning the war. Later on, you’ll discover how to upgrade your base to make your army that much stronger. 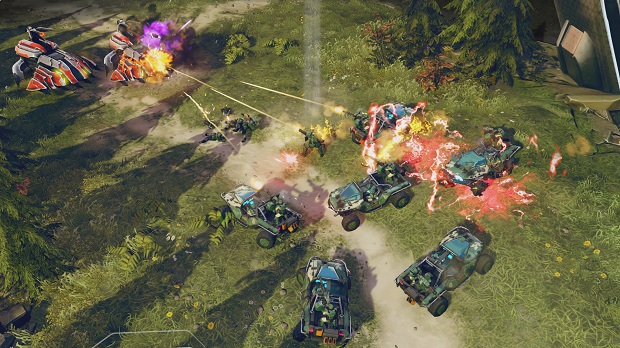 "When getting into Halo Wars 2 you’ll instantly recognize the often tense music that can go from calm and gentle to alarming at the drop of a hat. As the war carries on, powerful musical scores blast away allowing you to get into the game that much more."

My biggest concern after building up my legion of marines and vehicles was control over each unit, especially knowing I’d have to send different units off in several directions as the war expanded. My concerns were quickly thwarted as the game’s solution for this problem is quickly remedied by a quick tap of LB (which gives you control of all of your units from anywhere around the map), or by selecting individual units by tapping A (giving you control of a specific unit), and even a handful of units by holding down A for a short time. With three variations of control over my units, setting up my offense and defense came down to my own views and strategies. I then felt the need to make more and more units, but sadly, the game limits your army to around a dozen or so units.

As soldiers die, it becomes a constant need to head back to base and form more recruits and figure out which units will take down which enemies the best. Halo Wars 2‘s unit strengths and weaknesses are set up similar to the game “Rock, Paper, Scissors.” One unit may be strong against another, but weak against something else. For example: Marines are an effective counter unit to air units such as Hornets, while Hornets are effective against tanks such as Scorpions, while Scorpions are effective against Marines. This makes strategizing on the battlefield a whole lot of fun and intense. The D-pad can also be used as an assortment of different key features, like selecting specific units for attack instantly.

These big battles can be exhilarating and very exciting, but I found the smaller more intimate missions where Energy and Supplies are purposely very limited to be the true nail-biters of the campaign. There’s definitely a learning curve as to what exactly does what and dying is something that will happen time and time again.

As the war rages on the story unfolds, new maps are introduced and each new location is designed brilliantly and full of detail. From war-torn landscapes to lush, brightly colored forests, you’ll immediately recognize this as a Halo game. Much like the aesthetics of Halo 5, the landscape is familiar but also new and always amazing to witness.

With a fully voiced cast, the characters of Halo Wars 2 come off as sophisticated and militaristic. You definitely believe what they are saying is fact, and you can only hope that their strategies work. Isabel — Halo Wars 2’s equivalent to Cortana — is particularly interesting to watch during the cut scenes as she reacts to the devastation of war. Her voice work, like most of the characters is well cast. The only problem I had was with Captain Cutter, the leader of the mission. Cutter’s voice was adequate but ultimately fell under the stereotypical man-in-charge-of-everything. Cutter’s voice was cookie-cutter and really left a sour note with everyone else’s stellar work.

When getting into Halo Wars 2 you’ll instantly recognize the often tense music that can go from calm and gentle to alarming at the drop of a hat. As the war carries on, powerful musical scores blast away allowing you to get into the game that much more. When all hope seems lost, the music is so well orchestrated that it can manipulate your feelings into thinking there’s nothing left. That is until it brings the intensity right back up with a quick and loud musical number and a few explosions to make it a little more exciting.

Then there is the Blitz mode in Halo Wars 2. In simpler terms, Blitz is an RTS card game where you control several units and deploy variants of units using Blitz cards. These cards can be unlocked within the campaign or while playing other modes. 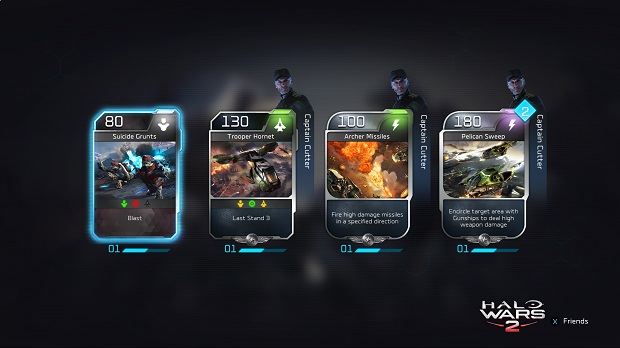 "Halo Wars 2 is a testament that RTS games when done right can work on consoles. With structured missions that allow you to not only control the battlefield, but explore hidden alcoves and find unique collectibles, there’s always a ton to do in each mission."

The twist to using cards, however, is that they require energy points. Energy points can be found in energy cores throughout any given Blitz map and usually after taking over a zone. The cores then convert into points allowing you to use any card in your library at cost. What’s cool is that some cards can have multiple effects besides just being a standard unit attack or defense.

To win at Blitz you must take over more zones than your opponent and rack up 200 points in the process; but points are only distributed to the team who has more bases than the other. I had a blast while playing Blitz, and it will be interesting to see how players create new strategies upon the game’s release.

Halo Wars 2 is a testament that RTS games when done right can work on consoles. With structured missions that allow you to not only control the battlefield, but explore hidden alcoves and find unique collectibles, there’s always a ton to do in each mission. If you’re looking for more of a challenge, increase the difficulty and try to finish each map within the allocated time. Every moment of this game is full of adrenaline filled encounters resulting into an experience that is always exciting and intriguing.

From a mostly stellar cast to intensely engaging battles, this game is spot on in most respects.

More units aren't necessary but would have made it more fun. Captain Cutter's voice is stereotypical and bland.

Final Verdict:
AMAZING
Halo Wars 2 proves yet again that RTS games can excel on consoles. Exciting battles and intense situations make this a must play for anyone into the Halo mythos.
A copy of this game was provided by Developer/Publisher/Distributor/PR Agency for review purposes. Click here to know more about our Reviews Policy.