Game Freak makes a game that isn't Pokemon. How does that work out?

The tragedy of Game Freak is hard to understate. Here is a supremely talented studio that has become a victim of its own success, with no end in sight. And while most studios would kill to have hit the pot of gold that Game Freak did with its first ever project, Pokemon, it must become tiring to essentially rework the same formula over and over again as Game Freak undoubtedly must, releasing nothing but Pokemon.

Of course, that’s not to say Game Freak has not released non Pokemon projects. It has released multiple other games, quite a few of them for competing consoles by Sega and Sony, in fact. And some of them, like 2005’s Drill Dozer, stand out. However, by and large, Pokemon is all the company is known for, and all that it is forever consigned to work on.

Which, as HarmoKnight demonstrates, is a damned shame. 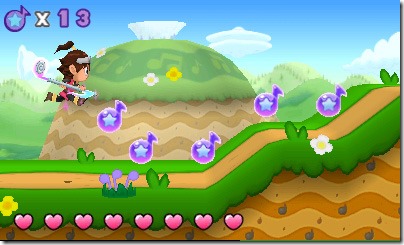 What is HarmoKnight, you ask? Somewhat in the vein of the Bit.Trip games, HarmoKnight is a rhythm based platformer games, that has you dodge environmental hazards and attack enemies to the beat of the music that is playing in the background. You play as the protagonist Tempo, who is charged with protecting the world of Melodia from the invading Noizoids on his quest to become an eponymous HarmoKnight.

The first thing that strikes you about the game once you start is up is the oodles of charm that it exudes. Of course, it shouldn’t come as a surprise- it’s by the same folks who make Pokemon, after all. But HarmoKnight is far less conservative with its approach to story telling, with a fully voiced narration, and some really sharp dialog, that is as humorous as it is self aware. Everything about the game makes you smile, from the adorable graphics to the excellent music to the great dialog, to the characters to yes, even the game over screen, that does a complete 180 from some ‘hardcore games’ like Dark Souls and just says ‘Oh Dear…’

Underneath all that charm is some surprisingly addictive gameplay. Whereas it would be tempting to call HarmoKnight as deceptive in its appearance as the Pokemon games are, in that they seem accessible, but there is a wealth of depth once you get down to them, it really is not. It’s a simple game with a basic setup, that somehow still manages to be addictive simply because of how much it keeps you coming back. You see, playing HarmoKnight is not hard. Doing good at it is not hard.

You can clear most stages without even trying, hell you can get some good scores and grades without trying much. But it’s trying to get that elusive top score that really does you in, because yes, HarmoKnight is deceptive, it’s deceptively easy. Trying to get all the notes, trying to get the highest possible rating on any stage is difficult, and you’ll keep returning to it, because the game will make it seem so easy, like you were almost there, and you’re sure to get it the next time. 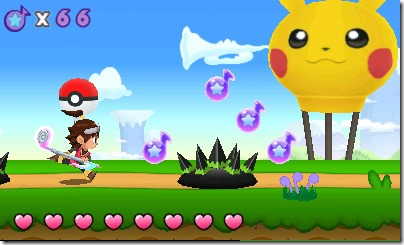 The actual gameplay is extremely simple. You press B to jump and A to hit, unless there are specific prompts on screen. That’s it. Your job is to collect notes by jumping (and you need to time your jumps to the music), whacking enemies (and timing your whacks just right to the beat so you can get notes from them too), and jumping to avoid obstacles. If enemies or obstacles hit you, you lose health, and losing all your health is a simple game over.

You need to collect the notes because collecting enough of them yields you a Royal Note, that is needed to progress through the overworld. You make your way through the overworld and clear specific stages, clearing ‘worlds.’ Each stage has a different stage has a different tune playing, and you need to master the rhythm of each to jump and whack your way through.

There are certain breaks in the routine, from boss battles (which have you navigating your way through labyrinths and attacking the boss to the rhythm) to special Pokemon themed stages, which have music from the Pokemon games playing in the background, and Pokemon themed visuals. These were personally among the best stages in the game, simply because of how internalized all Pokemon music is for me at this point, and how much fun I was having listening to all  the variations to it that would ensue because of my screw ups.

HarmoKnight is an expensive game. At $15, it is probably the among the most expensive eShop games, and just $5 cheaper than some lower end retail 3DS software. Having said that, this is a game that is absolutely worth it, and is completely whole heartedly recommended. HarmoKnight is probably the first fully must have eShop title since Pushmo back in 2011. It’s one of the stars in Nintendo’s digital store lineup, and considering the sheer quality of the games on the eShop, that really is saying something.

Literally the only knock against it that I can think of is that it is too expensive. Which it is. $15 is a lot of money to part from, and I can understand any trepidation someone might have spending that much cash on a digital game. All I can say is, it’s ultimately worth it. HarmoKnight is a charming, fun, addictive, and incredibly well made game that any 3DS owner should have in their library.

Oodles of charm, in everything from the graphics to the music to the dialog to the characters; incredibly simple but addictive gameplay; lots of content

The asking price of $15 is a bit steep

Final Verdict:
SUPERB
HarmoKnight is a charming, fun, addictive, and incredibly well made game that any 3DS owner should have in their library.
A copy of this game was provided by Developer/Publisher/Distributor/PR Agency for review purposes. Click here to know more about our Reviews Policy.