“How far are you going to go to save someone you love?” is the major theme behind Quantic Dream’s interactive cinema thriller. Heavy Rain not only answers that but also answers the question that: “Can games better what movies can do? “ The answer is a resounding yes. Heavy Rain is the pinnacle of storytelling for the fact that you are scripting your own stories based on the decisions you take during the course of the game. Ethan Mars, an architect, lost his elder, 10 year old son due to a tragic accident two years ago, which totally changed his life. He is depressed and his only hope for living is his younger son, Shaun. But unfortunately he gets kidnapped by the Origami Killer, a psychopath who drowns his victims and places an orchid on their chest and an origami in their hands after they breathe their last.  You will take role four people:  Ethan Mars, a father, who has to fight it alone and go through the various challenges so that he can save his son. Jayden, an FBI investigator who is an expert in the field of ARI and uses his wits to unfold the clues,  Madison Paige, an undercover journalist who helps Ethan to uncover the mysteries of the Origami Killer and finally Scotty Shelby, a private detective who has been hired by the families of the victims. The story is one for the history books which can easily rival the best of the Hollywood movies. I won’t spoil it for you, even though I really want to spill the beans out, but all I can say is that the script will keep you at the edge of your seat till the very end of the game. Believe me, the story is worth $60 alone and hats off to David Cage and his crew for the wonderful implementation of the plot. 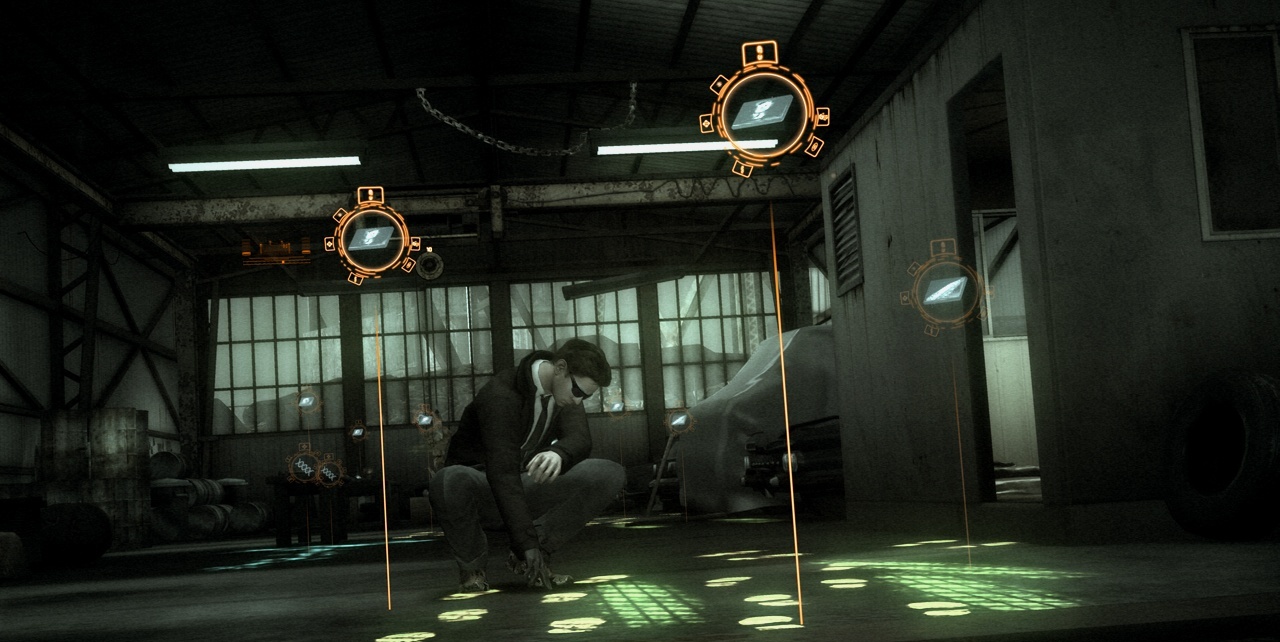 Heavy Rain is game that you will be playing less and watching more. It’s more on the lines of the amazing Metal Gear Solid series where majority of the cut scenes exceed the overall game play. Now that is not at all a bad thing since right from the beginning the game was always supposed to be an interactive cinema like experience. You will be playing the game, but you will find yourself getting lost in the gripping experience that Heavy Rain offers. The game play and the controls are pretty simple and straight forward. You basically walk by pushing the R2 button and carry out interactivities with different objects with the help of the on screen button prompts. Now it’s not that easy as it sounds, since the developers have been pretty smart about the different combinations you can use for different conditions. Also this is easily one of the best games on the PlayStation 3 that uses the motion sensor to a good effect. Now what different type of game play elements can a player expect from Heavy Rain, since the control mechanics are pretty much limited in scope? Believe me, I am surprised myself that after playing the game for fifteen hours or so, the ‘limited’ scope does not feel limited at all. Action sequences like the player driving against the traffic on a highway, chase sequences like running on a roof while the player is being chased by cops, stucked inside a car which has drowned inside a river…the action and the excitement just does not seem to stop while playing Heavy Rain. 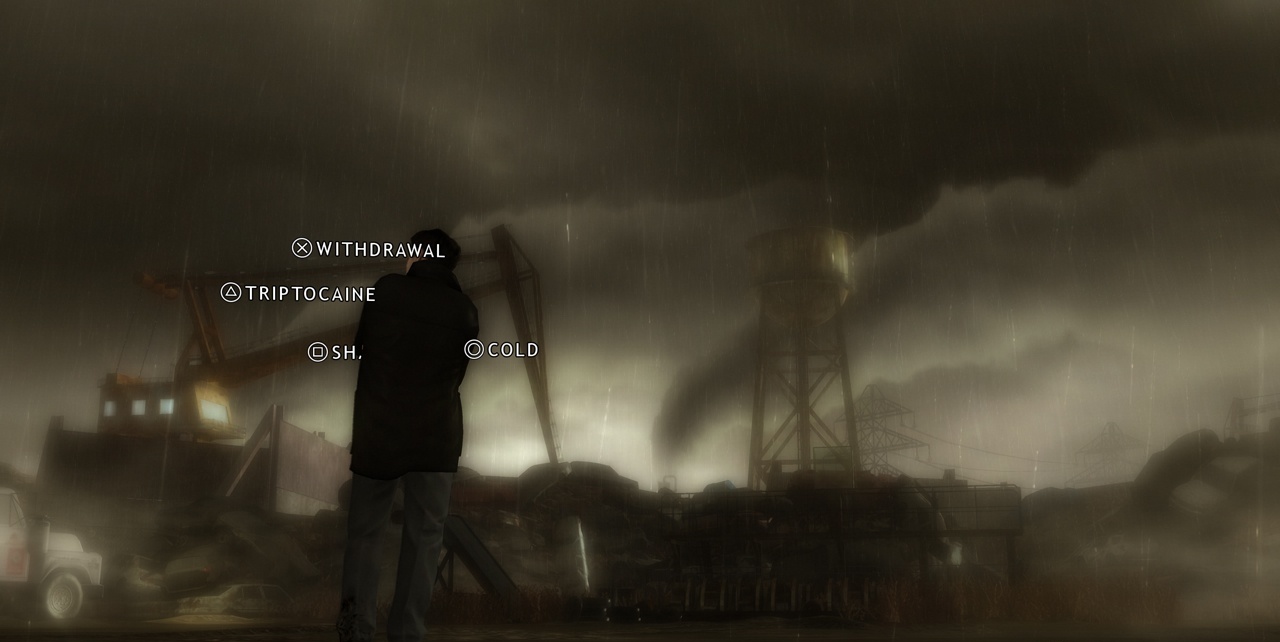 You’ll be making a lot of choices.

Heavy Rain is a heavily decision based game. Remember every action you do has consequences. Consequences that could lead to the death of one of your characters, but the catch point here is that the game will go on. Some of the decision making are so heavily derived from real life. For example, in an interrogation scene with Jayden, the anxiety grew over me so high, that I had to shoot one of the guys. Now believe me my heart and my brain never wanted to shoot him, but my hands did. The emotional attachment that this game provides with the player is amazingly very high. There are many scenes in the game which will make you emotionally drained. A scene where Ethan has to chop one of his fingers, so that he can find the next clue to his son’s whereabouts is highly dramatic and emotional in nature. It seems that Quantic dream did a lot of work on human psychology and it really shines throughout the game.  Now again you have the option of not chopping the finger, but just imagine being in Ethan’s shoes. You would have done the same thing.

See the video below to get a feel yourself:

One of the minor complaints that I have with the game is the camera. The camera, sometimes behaves in a manner which annoyed me a couple of time, especially in a scene where Madison and Ethan had to make a quick run away. But as I said it’s a minor issue and it really does not blow away the brilliant gaming experience that I have had with Heavy Rain so far. The game has some of the best visuals I have ever seen in video games. Man! The PlayStation 3 really has some really raw processing power and it’s really showing now. The character models, animations, lip sync are jaw dropping. I mean all the work that Quantic Dream did with the motion studio that they have has really paid off big time. There is no screen tearing and not a single drop in the frame rate. Heavy Rain is a gorgeous looking game from head to toe. The voice acting is of the highest order, considering the fact that based on your decisions the character can get aggressive or stay cool. The elevation of background music when some heart pumping sequences are going on or the techno music that gets played in one of the sections have been wonderfully recorded for.

Visually, one of the most impressive games this generation.

Heavy Rain is one of the finest games released this generation. Not due to the fact that it has amazing script and visuals but due to the fact that it has proved that video games can be as good as or even better than movies. The various decision based branches makes multiple playthroughs possible. Small issues really don’t come in to the way of making Heavy Rain an amazing game. If you are a fan of suspense movies or you love playing great games, do yourself a favor and buy Heavy Rain now.

Amazing decision based script, One of the best motion captured games ever made, Stunning voice acting, Score that can rival best of Hollywood movies, Highly emotional and an intense game

Final Verdict:
EDITOR’S CHOICE
Quantic Dream’s Heavy Rain proves that video games can be as good as movies, if not better.
A copy of this game was provided by Developer/Publisher/Distributor/PR Agency for review purposes. Click here to know more about our Reviews Policy.