First things first, Heavy Weapon is a very easy game to jump into and enjoy.   There is little to no learning curve involved in this game, and the action is certainly enjoyable.  Heavy Weapon is a side-scrolling shooter in which the player controls an upgradeable tank in an effort to combat the Red Star army.  Each level consists of about 5-10 minutes worth of action that reaches its climax with a face-off against the level’s boss.   Enemies include helicopters, fighter jets, bombers, tanks, dirigibles, pickups, and just about any other military vehicle you could imagine.  Bosses are a little less traditional and range from a mace-wielding robotic contraption to a missile-firing floating head. 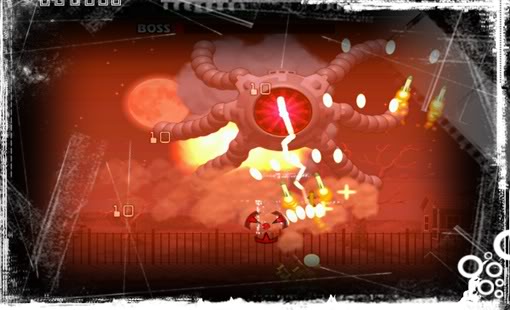 With a name like Heavy Weapon, this game just wouldn’t be right if the player’s tank didn’t have an arsenal of its own.  Thankfully, one of the most enjoyable parts of this game is the ability to upgrade weapons at the end of each level.  Available weapons range from homing missiles and lightning bolts to laser and flak cannons.  Each weapon type has three levels, getting progressively more destructive as they go. Players can also collect nukes and “turbolasers” during the levels that annihilate enemies rather immediately.

The action is fast-paced and certainly enjoyable, but the game has its share of downfalls as well.  The most glaring issue is the fact that the terrain in the game is completely flat in every single level.  The background scenery changes each level, but this does nothing to mix up the feel of the game.  Heavy Weapon does get a little more difficult towards the end, but the action can get repetitive after playing several levels.  There are about 19 levels in the game, so the repetitive feel begins to sink in about half-way through. 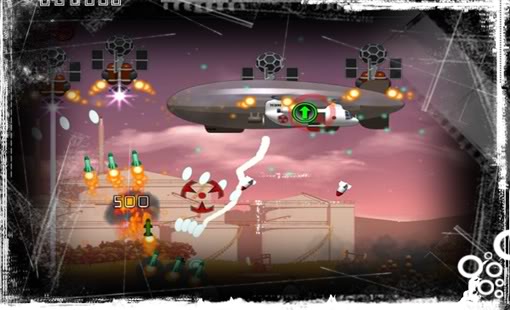 Games are almost always more fun with friends, and Heavy Weapon is no different.  The game offers multiplayer in the campaign mode, and, unlike most games, playing the campaign in multiplayer doesn’t disable trophies.  If you’re the trophy hunting type, don’t be afraid to bring your friend along for the war.  Heavy Weapon also offers a typical survival mode in which players can face wave after wave with the clock ticking.  Graphically, the game doesn’t stand out, but it’s not meant to.  Sound effects are suitable to the style and do quite well.  Replay value is slim to none, so the $9.99 price tag is a judgment call for each individual. Heavy Weapon isn’t very difficult, revolutionary, or deep; but Heavy Weapon is fun.  It takes gameplay reminiscent of decades past, shines it up a bit, and delivers a game suitable for spare time.

Final Verdict:
GOOD
Heavy Weapon brings nothing new to gaming, but it does bring a little fun to the Playstation Network.
A copy of this game was provided by Developer/Publisher/Distributor/PR Agency for review purposes. Click here to know more about our Reviews Policy.