Let’s be honest, we were all disappointed by Diablo III. Blizzard’s long anticipated and eagerly awaited sequel to its 2001 breakthrough title that has gone down in the annals of gaming history as a veritable classic launched in the wake of some very questionable design decisions, all seemingly aimed at maximizing the monetary potential of the game, and with a plethora of problems. And while the core game still remained fun in its distilled essence, it is by and large agreed that Diablo III is not the game its predecessor was.

The void left by Diablo III leaves the door open for a slew of clones to hopefully capitalize. Heroes of Ruin is one such clone, a surprisingly fully featured online game released on the Nintendo 3DS by Square Enix. It plays great and provides for a great dungeon crawling experience on a handheld, one that is unmatched on any other handheld on the market so far, but it strays a little too close to its inspiration and fails to actually be compelling in its own right. When a game’s biggest bullet point is that it’s a Diablo clone, you know it lacks an identity of its own.

That’s not to say Heroes of Ruin isn’t a good game- it is. There’s a lot it does right, and a lot of firsts that it accomplishes, including being the first great dungeon crawler on a handheld. Most importantly, Heroes of Ruin’s online functionality is impressive. We’ve heard that theoretically, the 3DS provides for a great, unified and seamless online experience, but this is the first that we get to see it in action. With drop in/drop out online multiplayer, with strangers or with friends, with voice chat and negligible lag, Heroes of Ruin is the 3DS’s killer app as far as online enabled titles go. 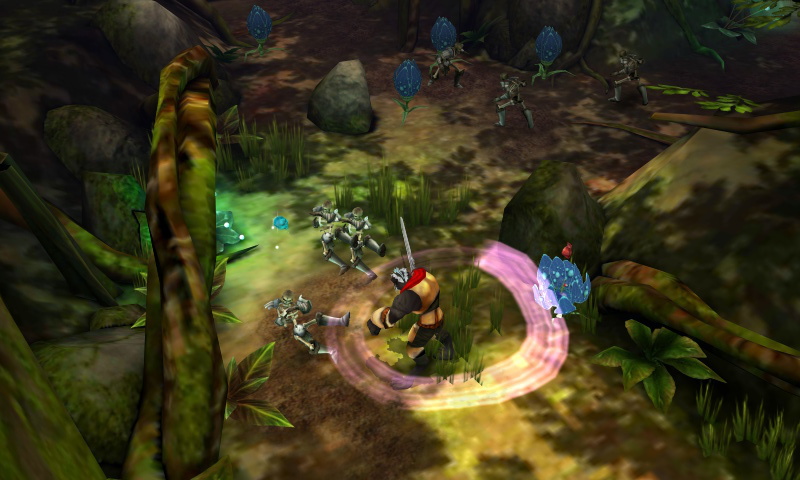 It’s a bit tragic, then, that as bold and daring as the game gets in its approach to online, its actual game design is conservative almost to a fault. Heroes of Ruin is a Diablo clone through and through, and it will never be mistaken for anything else. It’s got the same cooperative driven, loot centered, hack and slashing dungeon crawling role playing design as Diablo. Also, unfortunately, like most Diablo clones, it lacks that game’s atmosphere or charm, being stuck with a relatively generic visual and audio design.

The visual presentation further takes a hit because graphically speaking, the game is just not that impressive, belying the impressive technical accomplishments of this game otherwise. The character models are all simple and stiffly animated, the environments are low textured and low poly, and the frame rate tends to dip dangerously a bit too often for my liking. The game looks on par with a launch era PSP game at times, but more often than not, it comes off as a mid cycle PSOne game. For 3DS games, it is often said that the screenshots don’t do its games any justice, and that they have to be observed in motion on screen. Heroes of Ruin looks as unremarkable on screen as it does off it.

For all of its graphical failings, though, Heroes of Ruin remains an addictive game to play. It might be an uninspired Diablo clone, but if so, at least it is an excellent one. There are multiple classes, each with its own hook, each uniquely balanced, such that each player will probably have his own differentiated favorite, and online matches will probably never end up with parties that have two or more of the same character type.

While the single player portion of the game leaves much to be desired- the short, six hour long campaign is devoid of any challenge, the story and the characters are absolutely forgettable, and even the game design stray a bit into being banal. Heroes of Ruin is a game with some unremarkable design at best, and it feels that way when played alone. 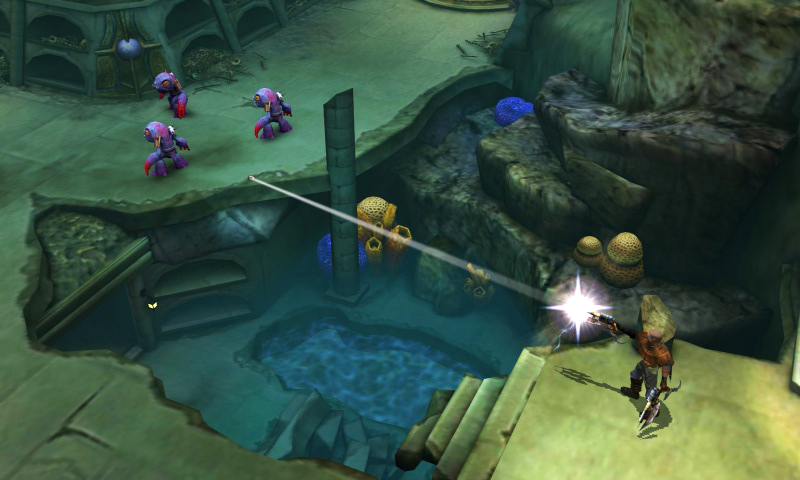 Happily, then, it’s a game that offers the option to be played multiplayer, both local and online, with or without friends, and it does so with style. Although the suite of options that it provides is pretty much standard for the genre, it is unprecedented for a handheld game, and for a handheld dungeon crawler. In that sense, being just as good as the standard actually works in Heroes of Ruin’s favor, because it is literally setting the standard on handhelds.

A lot of Heroes of Ruin’s fun comes not from the game design, which, as stated, is lacking- the enemies are embarrassingly easy, and the less said about the game’s attempts at puzzles, the better- but from just the sheer fun of playing with someone else. Taking enemies down won’t take too long, and exploring the world isn’t much of an incentive, since it really is quite generic. However, the sheer fun of just working with someone, and collecting loot, upgrading armor and weapons, is enough to keep you returning to the game again and again, looking past its no small list of flaws every single time.

It’s a game that takes on itself to do a lot, and it doesn’t always succeed. It’s really fault it for having ambition, though it is easier to fault it for not having the execution to match its ambition. Its generic visuals and gameplay setup might not really be indicative of this, but Heroes of Ruin is a game with a lot of heart.

Extremely ambitious game; probably the best online setup for any game on a handheld yet; addictive loot based setup of the genre remains intact and as fun as ever; class differentiation is well done

Campaign is mediocre; game design strays into being banal; graphics are underwhelming, with low poly models, muddy textured environments, and dropping framerates; extremely generic; campaign is short and unremarkable; game world is uninteresting; the game doesn't always have the execution to match its high ambitions

Final Verdict:
GOOD
Its generic visuals and gameplay setup might not really be indicative of this, but Heroes of Ruin is a game with a lot of heart.
A copy of this game was provided by Developer/Publisher/Distributor/PR Agency for review purposes. Click here to know more about our Reviews Policy.