A fine piece of abstract art, but it almost completely forgot to be a game as well.

Journey kickstarted the great “art game” rush back in 2012, but behind the gorgeous environments, unique multiplayer experience and beautiful messages one could still find a solid game, with a very set beginning, middle and end, goals and direction to the gameplay to push you forward. The looming mountain in the distance was simple, yet effective, and it was a constant focus.

Journey has had many pretenders since, such as Proteus and Dear Esther. Depending on the game, they get the intentions behind these games right to various degrees, with beautiful worlds and hidden messages for those willing to think about them, but a frequent stumbling block is managing to keep a compelling game alongside the artistic intentions. Hohokum unfortunately falls into this trap and almost completely forgets the game in pursuit of looking at the art. 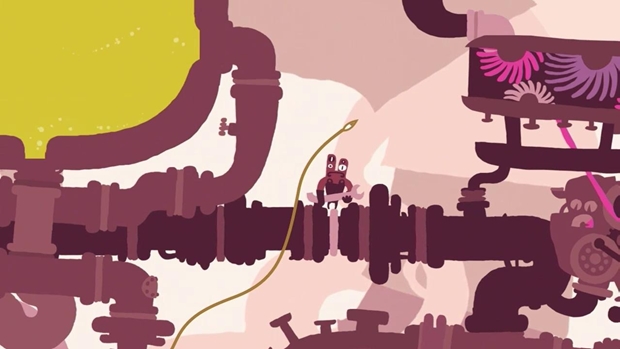 "This flimsy plot device is simply present, and doesn’t provide any real incentive to hunt down your worm buddies. It expects, or structurally demands exploration through a lot of separate universes."

At the outset, the game is most reminiscent of Flow, where you guide your little worm character through a primordial environment as you come to grips with the controls and the premise of Hohokum. After playing around awhile, finding different multicolour worm friends and activating everything you can touch, the other worms dissipate to vastly different dimensions for a bit of cosmic hide and seek.

This flimsy plot device is simply present, and doesn’t provide any real incentive to hunt down your worm buddies. It expects, or structurally demands exploration through a lot of separate universes. To it’s credit, these universes are all very distinct both audibly and visually. You’ll journey through beachfronts, forests and urban environments, as well as everything in between through a heavy modern art filter.

The variety of environments is impressive and grants the game an additional layer of “Sound Shapes” appeal, as the more stuff you touch and activate within a universe will influence the bouncy and playful soundtrack. Tracks will begin mostly ambient, with little going on until you start bumbling into things and waking up the inhabitants. While it never gets as intricate as Sound Shapes, music is a huge part of the worlds. Each universe is just as visually distinct with unique motifs, colour palettes and several might even have characters to interact with. 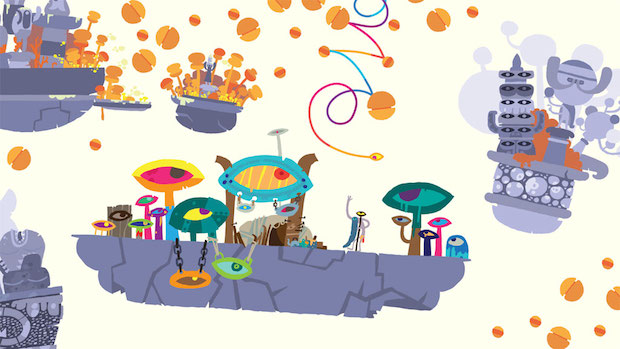 "It never once evolves beyond exploring the universes presented to you. Rather unlike something like Journey, the game never gains a focus or direct objective."

The abstractness of the game and each universe within offers constant change and remains visually interesting throughout, shining as one of the few strengths of the game. The gorgeously colourful environments pop off the screen and each universe introduces a unique palette that never offends the eyes or makes it hard to pick out what you can interact with.

Here is where I would talk about the gameplay itself, and how it progresses. However, that’s the major problem with Hohokum, it never once evolves beyond exploring the universes presented to you. Rather unlike something like Journey, the game never gains a focus or direct objective. Your worm friends interspersed through the games world are there, but the game is as unconcerned with them as I was during play.

Controlling the worm creature could not be more simple, guiding it around with the stick and managing its speed with a few face buttons. Gliding into or by environment pieces might activate them, and provide an extra piece of the abstract artistic vision in front of you. One of your side goals is to find the eyeballs within each universe, yet this is about as engaging as finding the Assassin’s Creed flags, but without so much as a trophy for the effort of tracking down all 146 of the little buggers. 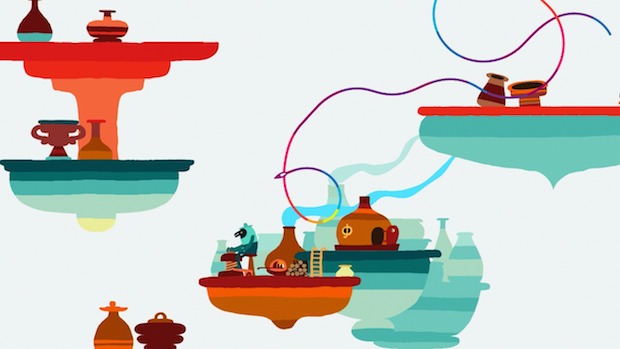 "Were one to simply take presentation into account, Hohokum would pass any test with flying colours."

Hohokum is a very well put together, living abstract art piece. The gorgeous presentation pops off the screen and each universe in visually distinct and amazing to look at. The musically bouncy cosmos you’ll journey through is an auditory joy. Were one to simply take presentation into account, Hohokum would pass any test with flying colours.

Unfortunately, I personally feel compelled to consider the gameplay above all else, Call it a curse of being a Nintendo child. Hohokum falls flat on almost every level here, dropping its flimsy premise almost as soon as its presented, and never once evolving throughout. It feels in service to its presentation, demanding you look at the art and let that satisfy you in place of the minimal gameplay. Your own mileage with the game will come from just how much appetite you have for what it wants to do, but as a game it is exceedingly hard to recommend. Come for the pretty pictures, just don’t expect to stay for the interaction.

Presentation is top notch. Visuals pop colourfully off the screen and music is constantly playful.

The game is almost completely unconcerned with gameplay and the basic setup is almost immediately dropped and never once evolves.

Final Verdict:
POOR
There isn't much to the bottom line here. Hohokum is a great art project, but taken as a game it falls seriously flat. For the right price and mindset, possibly enjoyable, I just got very little out of it.
A copy of this game was provided by Developer/Publisher/Distributor/PR Agency for review purposes. Click here to know more about our Reviews Policy.