Hokuto Ga Gotoku: Fist of The North Star Wiki – Everything You Need To Know About The Game

Everything you need to know about Hokuto Ga Gotoku. 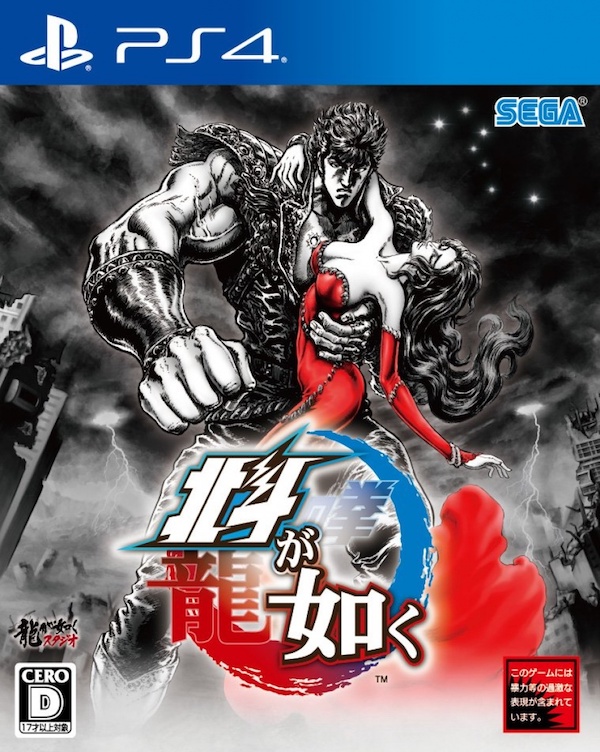 The upcoming Hokuto Ga Gotoku, or likely to be translated as Fist of the North Star is a PS4 action game, and an adaption of an anime property. It’s scheduled to launch exclusively for the PlayStation 4 in Japan on March 8, 2018. As it’s taking on the traits of the Yakuza series, the kind of progression, combat and mini games that series employs are to be adapted to the Fist of the North Star Universe.

On August 26, 2017 the world would learn about the Yakuza team taking on a new project, the adaption of the popular manga and anime series by Buronson and Tetsuo Hara, Fist of the North Star, and immediately revealed that the game was expected to launch sometime in 2018 in Japan. Known by Hokuto ga Gotoku, the story of the game was said to pick up after the events of the manga series.

The game would be shown off at Tokyo Game Show 2017 just over a month later, introducing some of the Yakuza flavour that the Sega team was bringing to the title, which included series protagonist Kenshiro not only destroying bandits and the like, but also getting involved in several Yakuza like mini-games. The combat shown off was said to be faster than Yakuza  and very fitting with the series.

News would come out in bits and pieces over the next several months, with some of it being revealed by Sega themselves streaming bits of the game. Nothing major, but small things like a screenshot here and there, without showing off anything particularly new. In December 2017, Sega invited Japanese players to enter a contest at DAM Karaoke, where they would provide death screams for the game.

The studio would first provide a stream of the beginning of the game on January 13, 2018 where producer Daisuke Sato played while Sega Chief Creative Officer Toshihiro Nagoshi spoke about the game. Universe specific elements like Hokuto Shinken that change up how this game works from traditional Yakuza were first shown off here.

Taking place shortly after one of the early arcs of the manga, Kenshiro is making his way to a city, a haven for humanity following a nuclear crisis that left a good majority of the world dead. The Hokuto Shinken martial artist makes his way there tracking down rumours that his love, Yuria, is still alive within the city’s walls. This city is granted electricity and water by “Sphere City”, and grants the people of the city a comfort that hasn’t been seen since before the bombs fell.

Through his journey in Eden, Kenshiro will run into many faces from the series, even a few that never originally appeared in the adapted arc. His rival Shin, Rei, Jagi, Toki, Souther and Raoh all appear in modified capacities from the original manga, and some new characters are introduced.

Since it is a Yakuza game in sprit as well, Kenshiro will find an excuse to partake in a variety of mini-games and part time jobs. For example he can don a tuxedo and find a Sega Master System with an old Fist of the North Star game to play in it’s entirety. 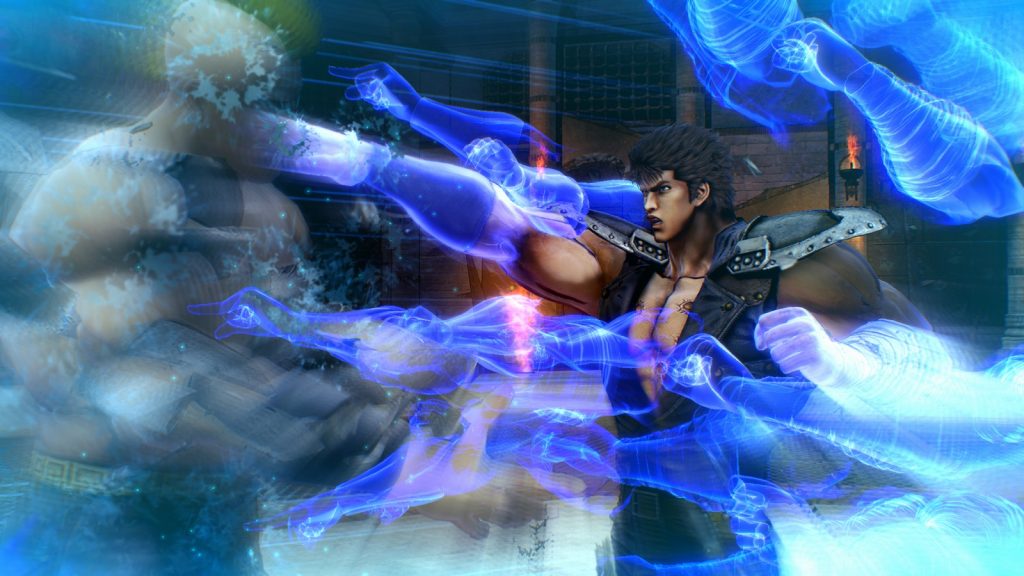 Fist of the North Star has its series specific flourishes, but it largely remains familiar to a Yakuza fan who might want to use the game as an introduction. From a third person perspective, players explore the city and take on various side missions and earn money through mini-games in between major story segments.

When Kenshiro isn’t directly searching for Yuria within the city, he’ll take on a variety of side activities, with their own small contained stories and objectives. These can involve side characters in the universe as they tell their little vignettes and help build the story. He can also participate in a variety of mini-games and side activities, much like the Yakuza titles. Many of the old favourites are carried over and adapted in some form.

Through exploration, Kenshiro can find old Sega Master System cartridges, including Fist of the North Star game to play in the entirety. Money is very important, because it acts as both buying power as well as experience, letting you invest it into skill trees to grow Kenshiro’s abilities.

When Kenshiro engages in combat with a group of enemies, a version of Yakuza’s real time, combo focused fighting is used. The action is focused on building combos and the environment against your attackers. Hokuto Shinken techniques stand in for the Yakuza heat attacks, and medallions allow Kenshiro to use the signature fighting styles of other characters from the universe. 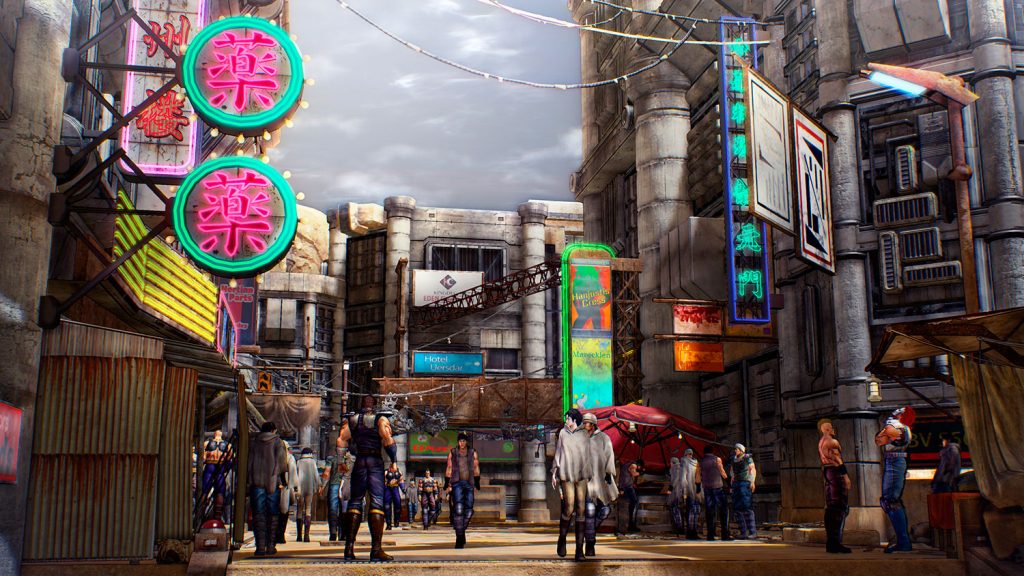 Kenshiro is the protagonist of the series and the main character of the PS4 title. The rightful heir to the ancient Hokuto Shinken, an art of assassination which uses the bodies weak points to kill, often in spectacularly gory fashion. Kenshiro protects the people of the wasteland against all kinds of pillagers and his rivals from the Hokuto school also trained in the art of Hokuto Shinken.

His rivals include Raoh; he takes the mantle of Fist King and is a towering man who lusts for power and hates that Kenshiro was chosen as the true master. His ego never allows him to retreat or reconsider his actions, which is his ultimate flaw.

Toki is the second of the four trained in Hokuto Shinken, but developed it into a healing art, in line with his pacifist nature. His use of the technique has developed into the self-made Hokuto Ujoken, and he can either use his skills to heal, or to kill in a pleasurable manner, granting his victim a euphoric death.

Jagi is the last of the four, a deceptive man who has zero problem cheating to see his ends realized. He always has a sawed off shotgun at his side, since he never really got the Hokuto Shinken down very well. He was left terribly mangled after a failed attempt at framing Kenshiro for his crimes.

Kenshiro has other rivals from different martial arts disciplines as well. Shin is one of the first major enemies Kenshiro faces down in the series and is suggested to appear here as well. He’s the keeper of Nanto Koshuken. Rei is the keeper of the elegant Nanto Seiken style and is a proud man who cares deeply for his sister. The star of leadership, Souther, is an intimidating man who commands the ultimate Nanto Ho-ohken. He’s somehow immune to Kenshiro’s Hokuto Shinken techniques.