Home Sweet Home Review – Terrifying, But Not in a Good Way

Home Sweet Home is a lackluster entry in a subgenre of horror that’s several years past its heyday.

Some of you might remember when the craze of Youtube Let’s Plays got started. Some of the most popular types of games for these entertainers to play were horror titles. Watching someone else go through a scary game was a lot of fun because you could experience the game vicariously and you’d have someone else around to be scared with. But aside from the occasional jump scare, most of these games didn’t have much going on in terms of actual gameplay. The fun that was associated with these titles was attached to the personality that was playing it. And without that personality, it’s questionable what else these types of games have to offer to players.

Home Sweet Home is a return to the age of first-person horror most commonly associated with these Let’s Plays. In this title, you’re thrown into unfamiliar locations and are tasked with finding your missing wife. Along the way, you’ll gradually be filled in on more of the story and will also pick up note scraps to help flesh out your understanding of what’s going on. 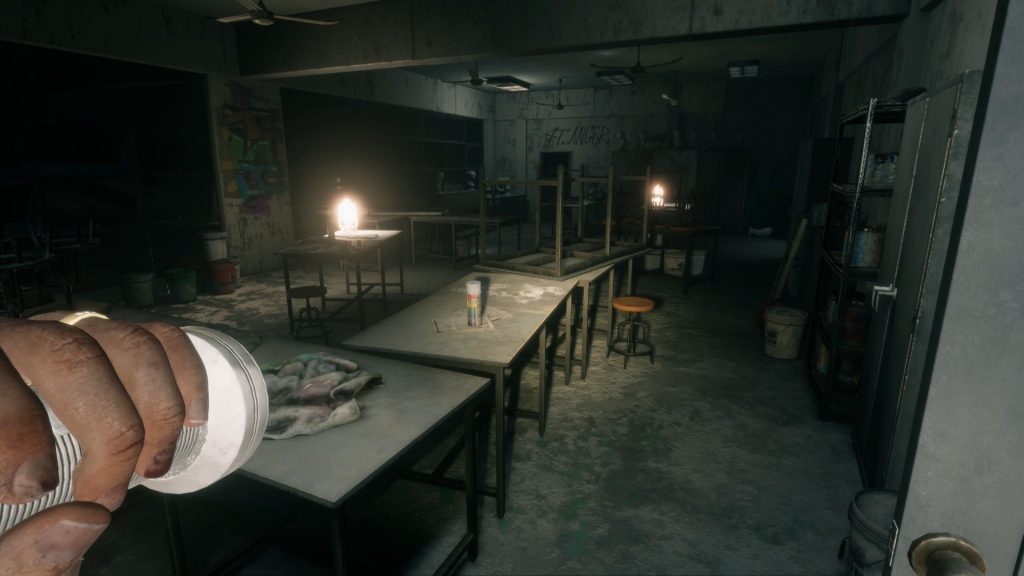 "Home Sweet Home is pretty simplistic when it comes to gameplay. You’ll be finding keys, stealthing around spirits, and solving a handful of puzzles during your playthrough. "

Scares in video games are always subjective, but if there’s one thing to say about Home Sweet Home, it’s that it can definitely be scary when it wants to be. There’s a great attention to atmosphere in the title, with the soundscape and lighting being standout aspects. Walking around alone in your ruined apartment with distant whispering going on and the only illumination coming from your static-filled TV is scary. However, it far too often falls back on the tried-and-true jumpscare in order to really capitalize on this oppressive atmosphere. And while there’s nothing wrong with a cheap little scare here and there, there’s not much else to the title, and it gets predictable after an hour or so. It’s disappointing to see a setting and atmosphere wasted like this.

Home Sweet Home is pretty simplistic when it comes to gameplay. You’ll be finding keys, stealthing around spirits, and solving a handful of puzzles during your playthrough. This is pretty standard fare for the genre, and the game doesn’t try to do much more than that. Objects that you can interact with are highlighted as you get close to them, and you’ll spend a lot of your time grinding up against every shelf and desk to see if there’s something new to pick up. You have no way to defend yourself from enemies and instead must sneak around while they’re not looking. When you’re spotted, you need to hide inside of lockers, giant terracotta pots, and other things until it’s clear for you to move around. The mechanics work well enough, although the logic for what you’re allowed to interact with is incredibly finicky. Doors especially are sporadically operable, and most hallways that you’ll run down in are dead-ends, with stubbornly unbudging doors at the end.

The puzzles in this game are mostly inoffensive. There’s only a few of them, but they end up being a few rungs more complex than the key-fetching fare that goes on in other games in the same genre. But don’t you worry; you’ll have to fetch a lot of keys too. A good amount of the puzzles end up having you run around levels, grabbing items to combine together in order to progress. It can get monotonous after a while, but there are a few that require you to actually think and use environmental clues to make your way through the level. These are good puzzles, and it makes me sad that there aren’t more of these that require a bit of deduction. 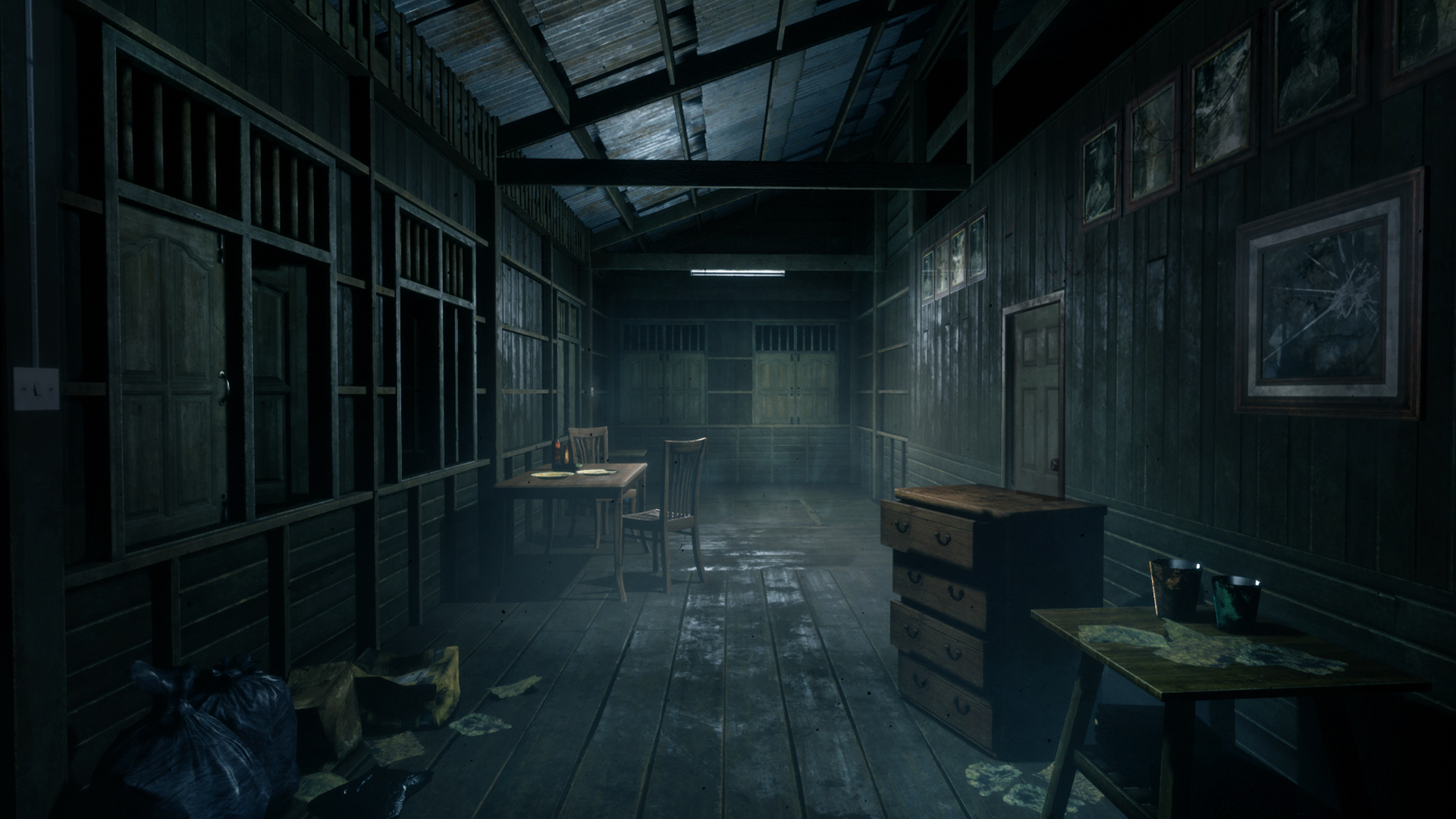 "There were also a few issues with audio not playing for certain actions, or enemy animations looping. My experiences were distracting and oftentimes frustrating. Thankfully enough though, the game never outright crashed."

However, there are a few examples that are sign-posted incredibly poorly, and have such obtuse solutions that you have to wonder if the person who designed them really wanted players to figure things out. One such puzzle is a safe puzzle at about the halfway point in the game, which gives you a very basic illustration presenting a tumbler and three numbers. The game expects you to get a code from this drawing. And yet it requires you to read the code upside-down, from left-to-right, and also requires you to pick the number that is opposite from the number given. Whether or not this was lost in translation, it’s a cumbersome mess, and it’s also not the only example in the game of a poorly-designed puzzle.

Home Sweet Home also doesn’t look especially good. This is a PSVR-compatible title, and it shows even when you’re not playing with VR. The UI and text font is tailor-made for VR, and it doesn’t translate very well to regular TV gameplay. Graphics also don’t hold up well. The few characters models in the game are decent at best and just plain bad at worst. The creepy schoolgirl, who is your main threat in the game, is fine at a distance, but the lacking graphical quality is really apparent when she gets up close to stab you repeatedly. Your wife’s character model also looks completely different from the girl captured in all of the pictures hanging around your house, which is kind of hilarious in a twisted way, but speaks to the lack of care that’s gone into this title. Environments are also uninspired and amatuer-looking, with furniture and environmental objects strewn about haphazardly. The locales in Home Sweet Home don’t give off the impression that these are real lived-in spaces, but are instead just mazes for a ghost to chase you around in.

There were also a few glitches I experienced during my time. The way the game determines whether or not you’re detected by enemies frequently bugs out, and sends a spooky Thai schoolgirl at you from the other side of the map. Then once you hide in your spot of choice, you have to watch as said spooky schoolgirl clips in and out of your spot for a while, until she finally gets bored and leaves. It ends up looking very sloppy, and you’re going to be seeing this a lot throughout your time with the game. There were also a few issues with audio not playing for certain actions, or enemy animations looping. My experiences were distracting and oftentimes frustrating. Thankfully enough though, the game never outright crashed. 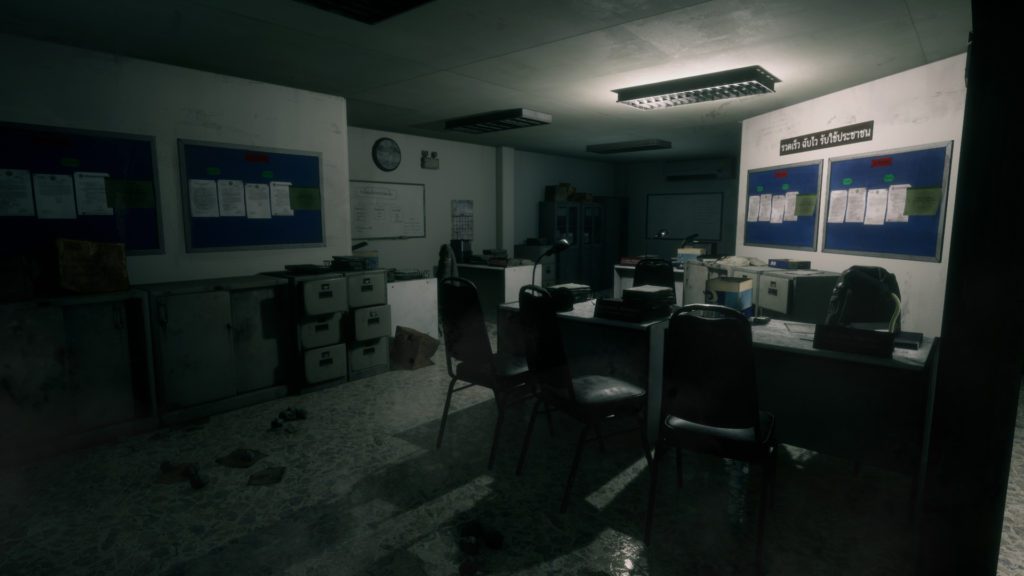 "Home Sweet Home would have been a much more novel game back in 2010, but nowadays, it’s just another run-of-the-mill horror title."

Even if you’re starving for new PSVR experiences, you would be far better off opting for something else. I finished my playthrough in about two and a half hours, and the time I spent with it was not worth the experience I got. This is an unpolished, low-effort title that shouldn’t take up any of your time. Even if you’re in the mood for a scare, other games have taken the genre in much more interesting directions than this title ever aspires to. Home Sweet Home would have been a much more novel game back in 2010, but nowadays, it’s just another run-of-the-mill horror title.

Boring gameplay; Unimpressive graphics; Everything else.

Home Sweet Home is a poor video game whose few good ideas don’t make up for the snore of an experience it is.

A copy of this game was provided by developer/publisher for review purposes. Click here to know more about our Reviews Policy.
Tagged With: home sweet home, pc, ps4, Xbox One, Yggdrazil Group