It pains me to review a game like Homefront: The Revolution. It pains me that a game which has such an intriguing and unique concept of integrating guerilla warfare in an open world would fail so miserably. I will be honest, I was looking forward to playing Homefront: The Revolution and I was avoiding all the negativity the game was receiving before release. Unfortunately, Dambuster Studios’ Homefront fails to ignite any kind of gameplay “revolution” whatsoever.

Let us begin with one of the game’s biggest problem…the technical issues. Homefront: The Revolution on the PS4 suffers from a ton of frame rate and performance issues. There were numerous times where I encountered frame rate drops and given that far more bigger worlds like the one featured in Metal Gear Solid V: The Phantom Pain ran at a silky smooth 60fps, it’s disappointing to see the game struggle to run at a consistent 30 fps. Furthermore, the game also has a few glitches in the form of character clipping and AI. The main character’s hands will simply just go through the doors and the NPCs will simply not move out of the way, hindering my progress. Homefront: The Revolution is not a bad looking game…it’s running on the CryEngine after all but the above mentioned issues really drag down the experience.

"The quests become boring and repetitive too fast, and the underwhelming gun-play does not help matters at all."

Unfortunately, the list of issues doesn’t end here. Homefront: The Revolution’s biggest strength should have been its open ended level design and shooting. Unfortunately, the game falls short in both of these departments.

Philadelphia is basically divided into three zones, namely Green, Yellow and Red. The Red Zones are those areas which are under the heavy influence of KPA and they will shoot you at sight. These sections are highly engaging as you will soon find yourself destroying enemy bases, strike points, stronghold and setting up ambushes. Achieving success here will turn the tide heavily in the resistance’s favor. The Yellow Zones are areas where the KPA’s aggressiveness is much more toned. These are areas where some of the game’s side missions will take place. You will find NPCs being harassed and tortured by the KPA. You would need to convince these NPCs to join your revolution, destroy KPA bases…in short it’s here where you will ignite the revolution to take down your enemy. And finally we have the green zone which is like a fortress where you will need to take down high value targets but beware these places are armed to the T.

All of this sounds like an exciting idea on paper and there is no doubt that most of this will remind you of the recent Far Cry games. Look, I am all for taking inspiration from another popular franchise and borrowing gameplay elements and building on them to make them better. This is how most games are developed these days but The Revolution does it in the worst way possible. It takes the gameplay design from the Far Cry series and instead of building on it, it deteriorates it. Make no mistake, I thoroughly enjoyed these sections initially but later on they became a chore. You will be doing the same thing over and over again…take this enemy out, destroy this base and retrieve this item. The quests become boring and repetitive too fast, and the underwhelming gun-play does not help matters at all. 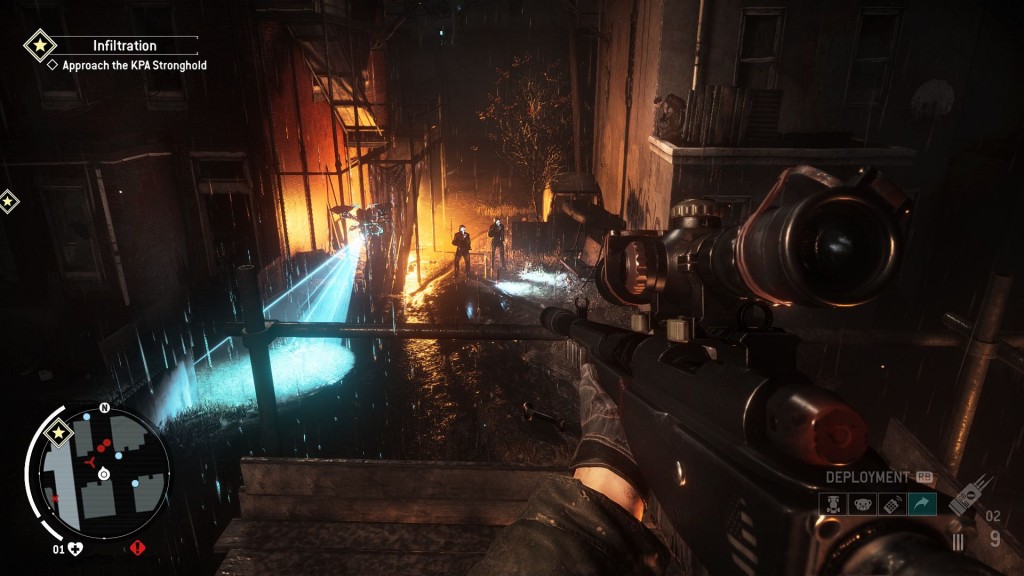 "Homefront The Revolution is a classic example of a game that was in development hell and just when things started to become better for the title, it was pushed out of the door to meet the deadline."

Although Homefront: The Revolution features a rather comprehensive weapon customization (which is one of the only few bright spots of the game), the overall feel of weapons feels lackluster. They lack the punch that other games have such as Battlefield and Call of Duty. Furthermore combat is highly unbalanced especially in those sequences where you will have to implement a bit of stealth. These sections add a bit of tension and some fun into the bland gameplay but as soon as you are discovered you will have the entire base running and gunning after you. The player basically has no chance to survive this encounter and you are then back to the game’s last checkpoint. Sequences such as these are annoying and frustrating and they don’t help the gameplay become better one bit.

Homefront: The Revolution does not come packed in with competitive multiplayer however it includes a co-operative multiplayer mode and to be honest, this is where the game’s limited fun factor lies. You and your three friends can participate in co-op missions and do the usual things that you will generally do in the main campaign. These missions have their own set of upgrades and progression system but unfortunately there are only six missions available at this point. However, the developers have promised free content due to be released in the next one year.

One of the highlights of the game is the representation of a fallen America. Burned monuments, wrecked buildings and the game’s use of guerilla tactics really make you feel suppressed and helpless at times. Unfortunately this feeling does not go hand in hand with the poor gameplay mechanics. In the end, Homefront The Revolution is a classic example of a game that was in development hell and just when things started to become better for the title, it was pushed out of the door to meet the deadline. Homefront The Revolution should have stayed in development for another six months and then it would have been truly remembered. But for now it seems that not only the revolution is a failure but it’s extremely unlikely we will ever see a new Homefront game in the future.

You really feel that you are being suppressed by a dominant army, weapon customization is fun.

Final Verdict:
AVERAGE
I had high expectations from Homefront The Revolution but in the end Deep Silver and Dambuster Studios pushed out a half baked open world shooter that no one will care about in a week or two.
A copy of this game was purchased by author for review purposes. Click here to know more about our Reviews Policy.