Posted By George Reith | On 18th, Jul. 2012 Under Reviews | Follow This Author @GNReith

I sometimes find myself watching a film or TV show and wondering to myself, wouldn’t this make a better book? I in fact have this frustrating habit with most forms of media, constantly questioning whether X franchise indeed works better on the written page or as moving pictures. It’s hard to question the medium of games though, as the interactivity within locks it as something inherently game-related. Hoodwink is a very unique exception to this rule, as the beautiful and vibrant world it creates is totally ruined by the actual game elements.

Hoodwink is the first of an episodic series of point and click adventure games from E-One Studios. As with most titles in the genre, Hoodwink’s initial appeal is in its story and aesthetic, something that could be best described as what would happen if the Maltese Falcon and 1984 had a child that lived in a cel-shaded fairytale world. If that hasn’t sold you, then you are clearly not imagining it right. To Hoodwink’s credit it creates a world that manages to feel cohesive, instantly accessible and yet full of surprises at every turn. The clichéd nature of the corporation run dystopia is constantly alleviated by the lively characters and fantastic mutant designs, creating a world that just begs to be explored and discovered. 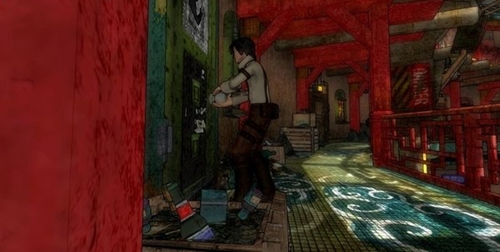 It’s all pulled together by a pretty solid presentation as well. It’s just a shame that the audiovisual elements of Hoodwink can be so hit and miss. The graphics, for example, offer a vivid cel-shaded style that works really well in conjunction with the fantasy themes of the game. The character and background designs are similarly accomplished, but they are let down by mediocre animations. The biggest problem is protagonist Michael’s movement animations. You do a lot of toing and froing in the conventional point and click, so it’s a major negative when the movement animations look this wooden. The audio too succeeds at coming up with passages of atmospheric music that bring out the noire elements of Hoodwink; when they actually play that is. It’s unclear whether this is an audio glitch or just flawed design, but the music will only play for a short time when you transition between areas before giving way to an eerie and unwelcome silence. Likewise, the voice acting, whilst not especially inspired, is emotive and competent enough. With this kind of audio quality elsewhere, why then are there so few sound effects? It just sounds rushed, unprofessional and ultimately uncanny.

The story itself is pleasant enough following the thief/self-professed “acquisition expert” Michael Bezzle as he steals an engagement ring from an anthropomorphic PI in order to propose to his sweetheart. The actual writing flits between humdrum and snappy at a moment’s notice, but the plot and pacing are generally fun and satisfying. The ending feels a little lacking in terms of a conclusion, but I suppose that is what the next episode of Hoodwink will be for. 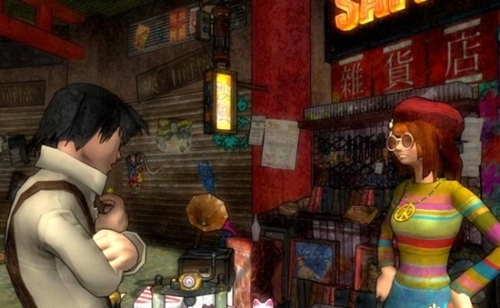 I don’t care how good you think your dialogue is, I want to be able to skip the bits I’ve heard already!

The above paragraphs represent a mish-mash of praise and criticism of Hoodwink, but that’s actually meant to be what’s discussing the good in the game. Now onto the bad, and there’s a surprisingly large amount of it. Hoodwink adopts the traditional adventure paradigms of hunting for items, using said items in abstract puzzles and hearing plenty of witty dialogue along the way. Such a puzzle focused genre doesn’t usually have to worry too much about the game engine, but Hoodwink’s interface is so fundamentally broken that it really does prevent even the simplest of tasks from being accomplished.

The game is controlled with a single mouse button, with your interactions being based on what you’re hovering over. In theory this context sensitive system is fine, but the cursor is generally inaccurate, and you’ll regularly click to interact with one object only to find yourself doing something completely different. This is made even worse by the fact that you can’t skip any dialogue in the game, meaning clicking to observe that tree in the square accidentally for the millionth time is even more infuriating. Coupled with this is the most bizarre thing, whereby clicking on an object multiple times stacks your clicks. Considering you have to double click on the ground to run, whenever you double click on an object, you’ll hear Michael’s observation twice in a row; and both of these dialogues are unskippable. It’s the cardinal sin of the adventure genre, and is infuriating beyond compare.

The actual puzzles themselves fail to offer much challenge, seldom asking more than travelling from A to B, but there can be something satisfying in just exploring more of the world and progressing the story. Hoodwink commendably attempts to break from the item grabbing nature of the point and click by introducing various mini-games that you need to complete. Some are as simple as turning a crank, but there are more interesting additions later in the game. Whilst the variety is pleasing, the actual mini-games themselves are even more flawed than the standard interface. Often relying on precise mouse movements, the cursor related detection issues make some of these mini-games near unplayable. They say variety is the spice of life, but in Hoodwink it’s more the spice of suffering. 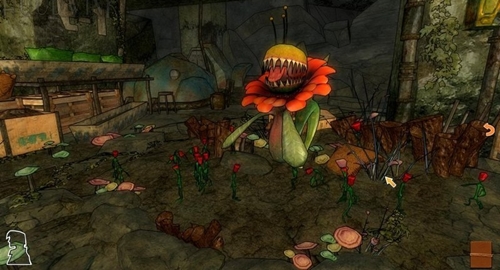 It’s great to look at, but this particular mini-game was far and away one of the most annoying.

Whilst the story pacing is generally swift, the gameplay feels anything but. Michael’s normal movement speed is sluggish and the constant pixel-hunting required for each action slows things down immeasurably. There are also times when you just wish there were some shortcut keys. Puzzles often take you to a separate screen, and it would’ve been wonderful to hit escape to return to the previous screen rather than having to click the back button each time. Double-clicking to run feels similarly archaic, as a dedicated toggle run key or option would have been a decent alternative to this. It has been said before by critics that the adventure game genre moves at a snail’s pace but, in comparison to other titans of the genre, Hoodwink moves at the speed of a glacier.

Games are all about testing. Testing your skills, testing your teamwork, testing your PC’s hardware etc. Hoodwink, however, seems more about testing your patience. It offers a fair amount of content, and the story does deserve to be seen through to the end, but it requires the patience of a saint to put up with the myriad of problems in the game’s basic engine and mechanics. It’s a shame really, as the design and aesthetics of Hoodwink are top notch and a clearly inspired effort. What a shame then that some poor coding could bring it all tumbling down. If E-One Studios take the time to completely redo their engine for the next instalment then I might be interested in the next episode but, as it stands, this will probably be the last time I delve into the universe of Hoodwink. That said, they could always just turn it into a TV show, as, without the tedious game engine, I’d definitely take the time to watch that.

A copy of this game was provided by developer/publisher for review purposes. Click here to know more about our Reviews Policy.
Tagged With: E-One Studio, Hoodwink, pc