Hot Wheels Unleashed establishes its own fun style of arcade racing while leaving most of its competitors in the dust.

Regardless of how you feel about the more simulation-style racing games developer Milestone is known for, Hot Wheels Unleashed is worth your attention. It’s much more on the arcade side of the racing spectrum than what we’ve seen from them recently, yet, despite being about toy cars, Milestone’s extensive experience with sophisticated racing games proves to be just the type of seasoning this game needed to not only stand out, but also, in many ways, blow the doors off its competition.

Hot Wheels Unleashed immediately lures you in with nostalgia overload, which is sure to be effective to just about anybody these days. Seeing as Hot Wheels has been around for over half a century now, the brand is uniquely positioned to appeal to kids, their older siblings and their parents equally, so smartly, Milestone leans into this at every turn with a ton of unlockable cars that include real Hot Wheels models you might recognize, licensed cars like Mustangs and Mini Coopers, as well as iconic vehicles from other IPs. All of the cars and tracks are incredibly authentic and meticulously detailed. Some textures for background and non-hot wheels-related environmental objects do take a backseat in terms of detail but you will basically never notice that with the more pertinent cars and tracks looking as great as they do.

There’s not a huge variety in terms of what you’ll come across in each race. Strips that build up your cars boost or give you a jolt of acceleration, some magnetic sections, a couple different types of hazards and some cool jumps make up the majority of what you’ll see. It’s fairly basic, but what Milestone does with these ideas through having interesting variations of them and creative track layouts keep the game lively. Similarly, despite the game only having a few different areas to race in, it’s the variants of those tracks that keep things interesting most of the time. A few more locations that looked a bit more different would have helped the tracks pop a bit more, but as it stands it’s certainly not bad – and you do have the option of two players locally and up to 12 online. 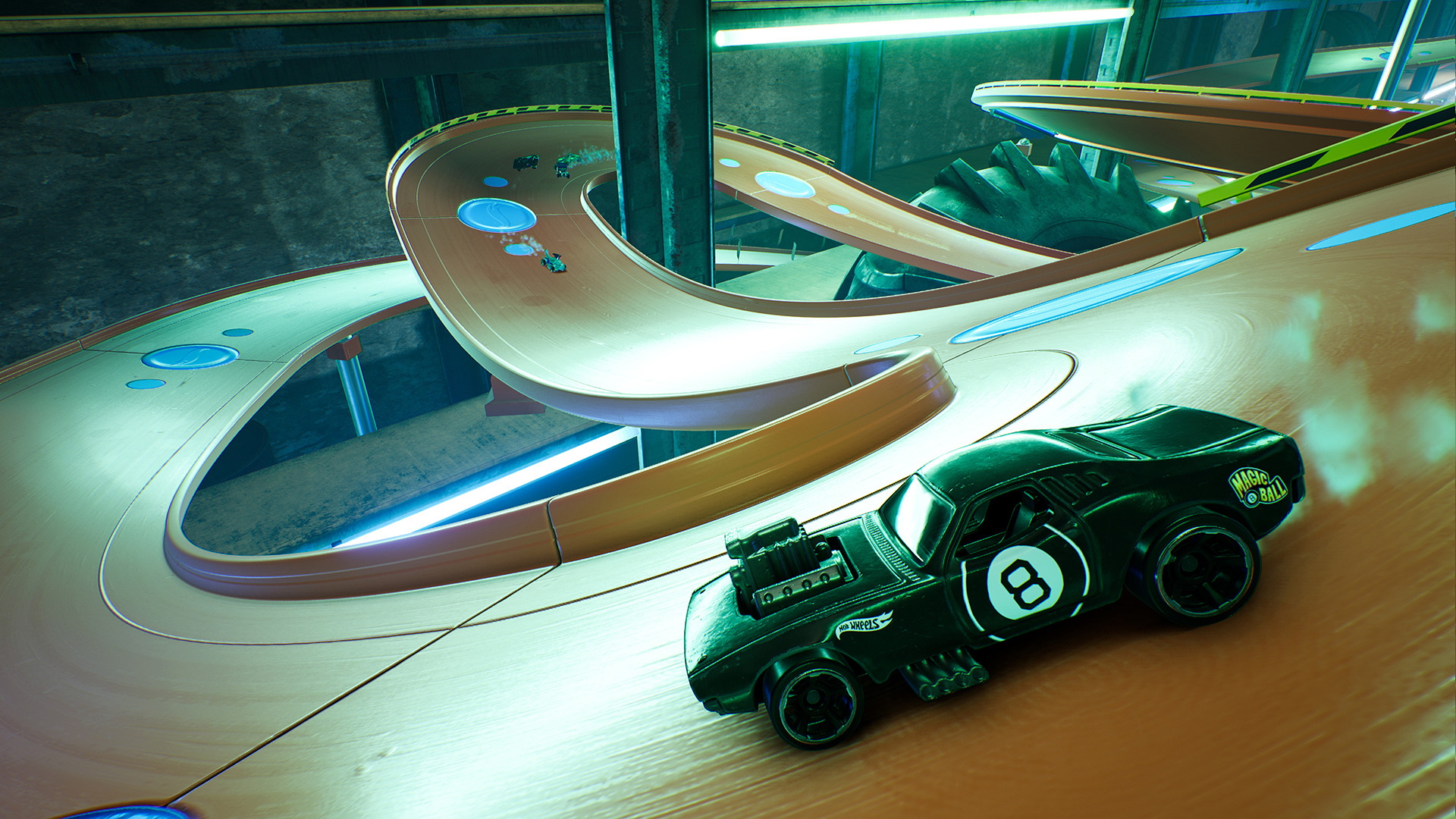 "All of the cars and tracks are incredibly authentic and meticulously detailed."

The vehicles, as well as upgrades and customizable elements are all unlockable with coins and gears that are earned by completing events around the rather extensive world map of the game’s main mode. The map itself is also somewhat gamified with secret events and unlockable items to be found among the more traditional races and time trials. The very standard and minimal selection of those event types does seem a bit at odds with the child-like imagination and creativity of the IP, but with how well it all works it’s hard to get too hung up on that. After you’ve spent some time winning those events, you’ll start earning coins and gears to spend on upgrades and more Hot Wheels.

Vehicles can be bought straight up through a rotating selection of limited offers or won through “blind boxes”, which are effectively just loot boxes that cost 500 coins. It all works, but I definitely would have preferred a comprehensive list of vehicles that I could sift through and unlock at my leisure instead of the game just surprising me with whatever it feels like with these two methods. If you end up with a car you know you don’t want, you can sell it for coins or dismantle it for gears, though, so that takes some of the sting out of it. Thankfully the game’s unique blend of arcadey speed and healthy challenge is more than fun enough to keep you engaged for several hours at a time, as you’ll be unlocking stuff at a fairly steady clip that improves as you get better.

Racing is fast, frenetic, and fun. The learning curve was surprising to me at first, though. Nailing perfect drifts, boosting through the crowd, and maintaining the top spot do not come easy with physics that can send you flying off the track or get you turned around as a result of slight miscalculations or, sometimes, through no fault of your own at all. That, and the fact that you don’t automatically get reset on the track after flying off and have to manually do it with a press and hold instead of just a press of the button – can and will cost you dearly in some instances. So much so that, sometimes, it might be best to just restart the event, which can put a ding in the enjoyment. 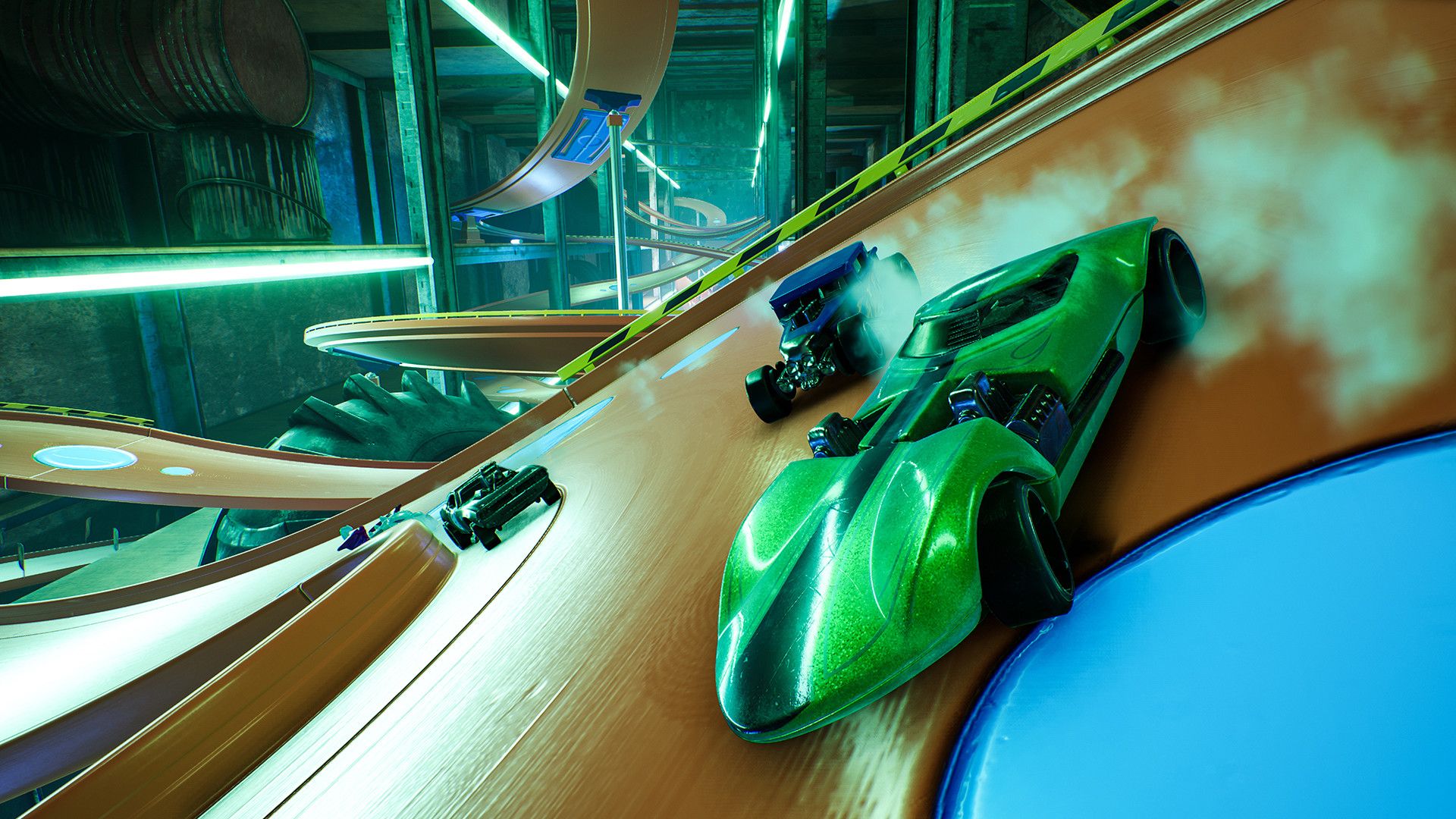 "Racing is fast, frenetic, and fun."

That said, most of this is alleviated once you start to memorize tracks and master the shifting your vehicle’s weight with the left and right sticks, which is something you will need to do to both get through sections that require it and make sure you stick the landing after a big jump. The few growing pains I experienced never made me want to put the controller down. In fact, most of the time they just motivated me to get better at mastering its quirks and avoiding its kinks. Once I found my core few cars that worked best with my playstyle it all started to click. So, despite its initial abruptness, the learning curve here is a rewarding one to overcome, and once you do, the game blossoms into one of the better racers I’ve played in recent memory. Showing off some of crazy moments you’ll have with the game’s video replays and rather in-depth photo mode will also be a blast for those looking to finally capture those fun Hot Wheels moments that were for so long just trapped in their imaginations.

Hot Wheels Unleashed wouldn’t fully be doing the IP justice if it didn’t have a robust customization suite for its cars, and it certainly does. From different paint colors for different sections of the cars and even different materials and textures to assign to those segments, odds are, you can get your favorite car looking exactly how you want with the livery editor. What’s more, you can upload your liveries to the archive for others to download and use if they want. Not enough racing games do this and I’m glad to see Milestone’s experience with detailed customization and networked functions come into play here.

Another area where Hot Wheels is represented well is in the track editor, which isn’t the most intuitive of its kind, but it provides a lot of freedom with fluid curves and slants that let you get things exactly how you want. Seemingly, a lot of what you see in the base game is available here, including background level areas and the big spider hazards. This, I suspect, is where the game will ultimately have the most longevity with people making their own creations and uploading them to be tried out by others. You have to validate your tracks by driving from the beginning to the end in order to save and publish it which in theory should prevent broken tracks from ending up on the servers, but time will tell on that. 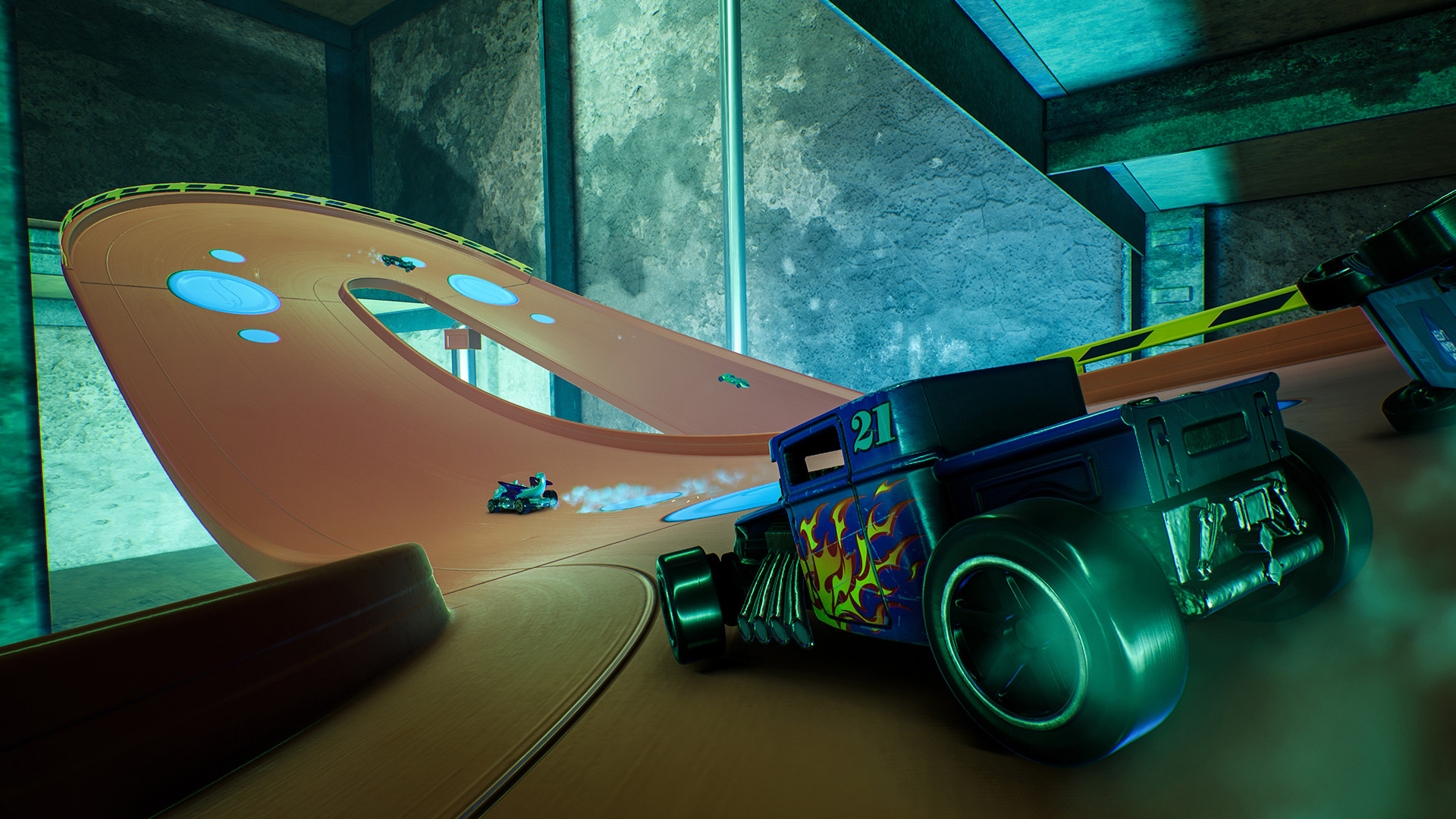 "Another area where Hot Wheels is represented well is in the track editor, which isn’t the most intuitive of its kind, but it provides a lot of freedom with fluid curves and slants that let you get things exactly how you want."

The sound design in Unleashed is great for the most part. The roars of different engines are varied and fitting for their vehicles. The sounds of boosting and bumping into other cars coming through your DualSense is also a nice touch, and while the music speeding up and changing pitch during boosts does sound kind of weird, it also adds to the frenetic nature of those moments, which I suppose is the point.

Not exclusively aiming at kids or adults was an infinitely wise decision for Unleashed, as it can truly be enjoyed by just about anybody. Despite the game’s physics and learning curve throwing you to the wolves a bit at first, the racing itself does grow into a surprisingly engaging time. It certainly could have used a few more event and location types, but Hot Wheels Unleashed mostly nails it where it counts with a fast, fun, and fully-featured racing game.

Too few types of events; Randomized loot boxes make it hard to get a vehicle you want; Not quite enough level background variety.

Final Verdict:
GREAT
Hot Wheels Unleashed is a bit light on level and event type variety but still delivers a great racer worthy of the Hot Wheels name with plenty of speed, detailed customization, and a meaty roster of fun vehicles.
A copy of this game was provided by Developer/Publisher/Distributor/PR Agency for review purposes. Click here to know more about our Reviews Policy.