How can Gearbox make a big deal out of simple PC features for Borderlands 2? 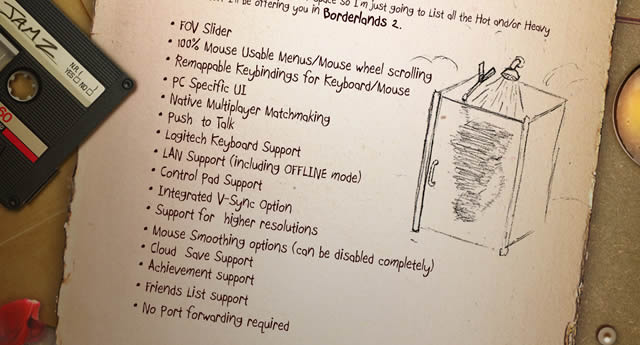 Recently Gearbox wrote a love letter to the PC gamers, and mentioned how much effort they’re putting behind the PC version of Borderlands 2. No shit, Borderlands sold really well on the PC. Now, you may actually think “wow these guys are so awesome!” but boasting about features like V-Sync, higher resolutions, FOV slider and so on, is actually pretty insulting when you think about it.

I can stand behind PC specific UI, and FOV slider, but most of the “features” they’ve mentioned here are absolutely rubbish and should be in by default. It’s as if they’re doing a big favor to the PC version of the game.

I mean, what the hell does “Logitech Keyboard Support” even mean? I use a Microsoft one! But seriously, come on. This seems like some sort of a joke. Initially when I saw this so called love letter, I brushed it aside, but this is a really poor show by Gearbox.

Borderlands 2 comes out this year for the PS3, Xbox 360 and PC. Although, one thing is for certain – the PC version of the game will be a competent port, and the only reason for that is Borderlands sold really well on the platform. All these “love letters” while cute, are actually quite insulting to PC gamers who have been gaming for a long time.