With the launch of the 8th generation of consoles, a new rage storm was kicked up to name the better fighter from the lot of platforms that run the multitude of data commands in 0s and 1s which we call games. Even though nothing had heralded the rise of a new victor to claim the title of a sole, most wanted platform of the generation, there seemed to be no harm in forwarding the supremacy of one over the other.

Now the consoles stand in the static glory of their supreme hardware while the elitist PC users look down on them with a sneer. But in this belligerent picture, those PC users oft stand forgotten who just wish to be a part of this new generation without fuss and much ado. So here we are to help such PC users out a bit, to help them gain an equal advantage in this dynamic play field to hold their heads up with more dignity in this miasma ridden war of platforms; a little more dignity but a lot more satisfaction of basking in the bounties of games. So what does it take to build a $399 PC that can let you hold off a decent bit against the well equipped consoles of this generation? It takes quite a lot.

Note: The following build is meant to provide a basic setup to the user, just as a console would, hence the exclusion of a monitor. Also, the said PC build is to be seen only in the light of its capacity to run games and not the variety of other uses PCs tend to provide.

Disclaimer: This is a hardware specific feature and we are not including costs for software like Operating System and Anti-Virus etc. 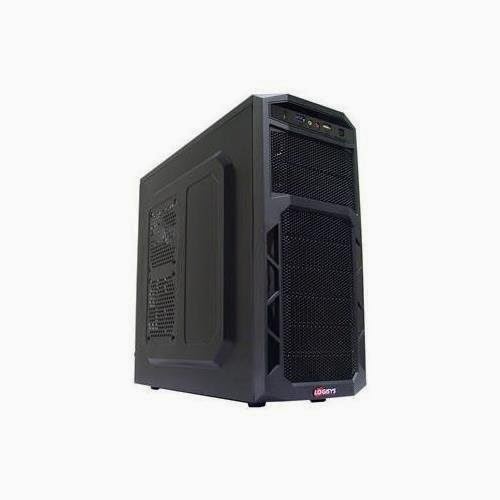 The first step towards building a PC is to select an apt case to put all those silicon board chips in. We’re aiming for a budget constrained micro-ATX system but the cabinet choices can vary. A good cheap option for this would be Logisys Corp CS369BK Case that comes with a 480W power supply. It can be snatched up for around $40 which is a very decent price for a cabinet that gives numerous expansion bays in addition to a power supply and fans.

The power supply of this one is a bit noisy though, so you may go in for a Ark Technology PA-08 Black ATX Mid Tower cabinet which has a 500W top munted power supply and although the airflow seems to be an issue in this one, it doesn’t cause any problems that would lead to performance hits with the equipment that it is meant to hold. The Ark Technology cabinet can be bought for about $32 which is a steal.