It's dangerous to go alone.

Hunt: Showdown is the most stressful video game I have ever played. Other games have stressed me out, but after a round of Hunt, I’d need about an hour to decompress. That doesn’t mean Hunt is a bad game – in fact, I think it’s a pretty good one – but it caused me a level of anxiety I haven’t felt in a long time. Not bad for a game with a questionable name and an even more questionable subtitle.

Hunt’s core idea is gold. You are a hunter thrown in 19th century Gothic swamplands of Louisiana. You’ll work in teams of up to three to find your target, take it out, and escape with an item they drop to claim their bounty. The thing is, these bounties aren’t on other people; they’re on monsters from another dimension. There are three in the game right now: the Spider, the Butcher, and the Assassin, and maps can have more than one bounty active at a time. Thing is, they’re not alone. The maps are big and covered in monsters ranging from Hellhounds to zombies and Water Devils, masses of tentacles that live in the swamp water that covers the map. You can kill them, too, and you’ll probably have to if you want to survive, but the real challenge here is other players, all of whom are after the same bounties, and are more than happy to kill you to claim them. If you die, that’s it. Your Hunter is dead, and you’ll have to start another character. 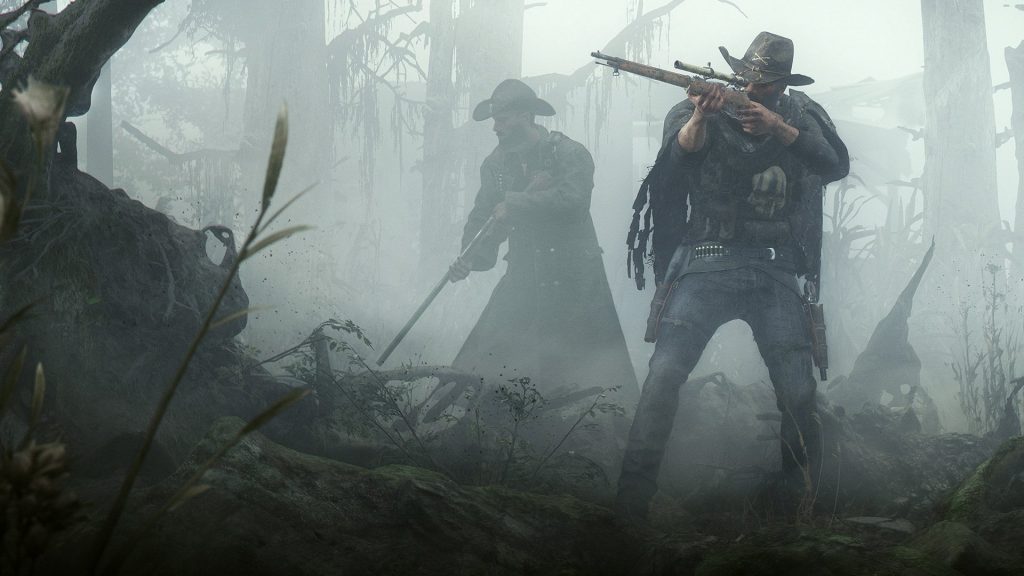 "Every round is an exercise in paranoia, constantly watching out for both the monsters around you and other payers. When firefights with other players do happen, they’re intense, and you’re never quite sure if you’ve managed to kill someone."

Permadeath combined with scary monsters and genuinely creepy environments makes for a genuinely intense game. The game ramps things up a notch by not telling you how many other players there are in a game, or whether they’re in a group or flying solo. There are no notifications when players die, and you have no idea how many players are still alive at any given time. Every round is an exercise in paranoia, constantly watching out for both the monsters around you and other payers. When firefights with other players do happen, they’re intense, and you’re never quite sure if you’ve managed to kill someone unless you go check, opening yourself up to more danger.

As you deal with all of this, you’ll also have to track down the bosses. You’ll do this by entering Dark Sight, which allows you to see echoes of other worlds. It’s your primary tool for tracking, bosses, and you’ll use it to sniff out clues that narrow down their whereabouts. After finding three clues, the game marks the boss’s location on the map, and you set off to take them down. The bosses themselves are hit and miss in terms of fear factor: the Spider, who can scale walls and ceilings and drop down on you from above, was terrifying, but I found the Assassin, who can teleport, to be a lot less so. They’re all generally fun to fight, but they do have flaws. They bosses are mostly confined to large buildings, so you can run in, do some damage, and get out, and they won’t chase you, which makes the encounters a little less frightening than they would be otherwise. This is offset by the idea that another group of players could show up at any time and kill you, but it’s still disappointing that they’re so restricted.

Once you manage to kill a boss, you’ll have to banish it, a process that can take quite a while, and something that alerts other teams on the map. Once, after killing the Assassin, my partner and I climbed up to the roof of the church we fought him in, each of us scanning a direction to make sure that no one was coming for us as the meter tracking the Assassin’s banishment slowly ticked up. It was one of the most stressful things I’ve ever done in a video game. When it was finished, we grabbed his item and beelined it for an escape point, listening to the sounds of gunfire in the woods around us and hoping we could get out before whoever was out there found us, as taking a bounty item alerts every other player in the game to your location. Holding the item from a boss also soups up your Dark Sight, allowing you to see other Hunters, but its uses are limited, and I’d used all of mine up long before we got to the boat that would carry us to safety. We did end up making it out and hitting the score screen allowed me to exhale for the first time in what felt like years. 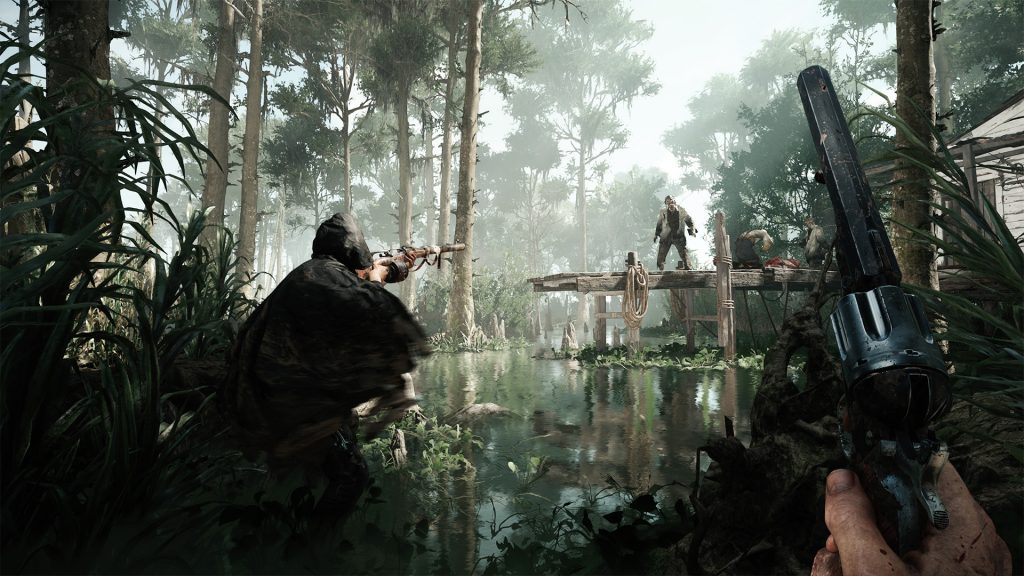 "Every round is an exercise in paranoia, constantly watching out for both the monsters around you and other payers. When firefights with other players do happen, they’re intense, and you’re never quite sure if you’ve managed to kill someone."

A large part of the game’s tension comes from its permadeath system. If a Hunter dies during a Hunt, that’s it. Lights out, curtains, thanks for playing. You can have multiple Hunters at any given point and using them means you’ll be able to level up their abilities and buy gear. Once you die, however, all of that vanishes, and you’re back to square one. The one exception to this is your Bloodline, a separate experience bar that is shared by all your Hunters and persists after they die. There are other concessions, too. If, for instance, you unlock a certain weapon and your Hunter dies, you’ll still be able to acquire that weapon without unlocking it again. You’ll just have to buy it again or kill someone else and take it off their corpse. Whatever you find in a match is yours to keep provided you survive, so this is a viable tactic, but it’s still horrible to lose a character you’ve put so much time into. Hunt eases you into the game’s systems by keeping permadeath off until your Bloodline hits a certain level, but the prospect of losing the rewards from a monster you’ve worked hard to kill are always there.

The game’s pace contributes to the tension, too. Hunt’s gameplay is slow and methodical. This is the last 19th century, and the weapons you have access to reflect that. Reloading means putting each individual cartridge into a gun, and combat is slowed down by the fact that this are old weapons, not modern firearms. Shooting takes time, and a single shot to the head can take you down. There are also melee weapons including knives, axes, and hammers, which come with the advantage of being largely silent, and other items like lanterns and bear traps that you can find in their environment and take with you. Hunt’s combat is slow, but there’s a lot of skill to being good at it. I ran around with one higher level guy who insisted on using melee weapons to kill every monster we came across, and I didn’t realize why until I realized he was trying to ensure nobody could track us by the sound of our gunshots. It slowed us down a little, but it made us a lot safer. Choosing your weapons, and how you approach situations, matters in Hunt, it was cool to see how something so minor could make a big difference. 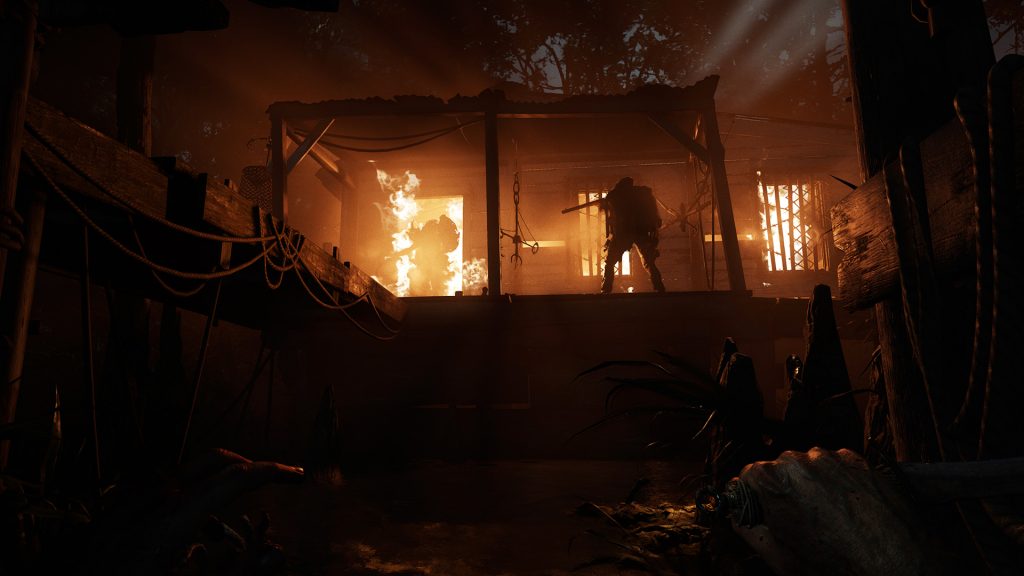 "The monsters, particularly the bosses, sound great too, and the thumping of their Spider’s legs as it moved and the clicking of its jaws made me almost nope out of my chair on several occasions."

If you don’t feel like risking your Hunter all of the time, you can also play quickplay. You’ll choose a random hunter and be sent into a battle royale arena for a free for all against 11 other players. There are no bosses in this mode. Instead, the goal is to get to a certain point on the map, collect a special bounty, and hold it for a certain amount of time. Like in the core game, holding the item means everyone else can see you, so the tension is still very high. The last one standing wins and winning also means that you’ll be able to acquire the Hunter you used for free. It’s a fun little mode, and a good distraction from inevitability of death that covers the core game.

Finally, I would be remiss if I didn’t remark on the game’s production values. Hunt’s sound design is incredible. Whether you’re treading water, walking over broken glass, shooting an enemy, or dealing with the sounds of the environment and people around you, every sound in Hunt matters, either giving away your position or someone else’s. When I said my partner and I could hear the gunfire from other teams as we fled the map, it wasn’t hyperbole. It adds to the game’s already suffocating atmosphere, and smart players will figure out how to use it to their advantage very quickly. The monsters, particularly the bosses, sound great too, and the thumping of their Spider’s legs as it moved and the clicking of its jaws made me almost nope out of my chair on several occasions. This is a game that benefits from a good set of headphones. Hunt doesn’t quite look as good as it sounds – environments can look washed out and there’s a lot of texture pop-in – but it’s still very pretty, and the art design more than carries any technical shortcomings.

Hunt: Showdown may be the latest in a long line of games to suffer from questionable naming conventions – seriously, what is it with subtitles these days? – but it’s a unique game that does what it wants to do pretty well. It’s a little barebones right now – there are only two maps, and three bosses – but it’s good at what it wants to do. The technical issues will turn some people off, as will the game’s intensity, but those looking for a unique game with some spooky flavoring could do a lot worse. I don’t know if I’ll play Hunt again (at least not without friends) because it stresses me out so much, but it’s impossible to deny the power if trudging through the Louisiana bayou hunting for monsters, listening for anything that might be a threat, always watching for the other players, and hellhounds, on your trail.

Texture pop-in and visual bugs. Only three bosses and two maps so far. Bosses are restricted to certain areas. It might be too intense for some people.

Final Verdict:
GOOD
It could use some more content and a little polish, but Hunt: Showdown is an intense and unique game with incredible sound design, a fantastic premise, and compelling gameplay.
A copy of this game was provided by Developer/Publisher/Distributor/PR Agency for review purposes. Click here to know more about our Reviews Policy.