Huntdown is a far more compelling game than its generic name might suggest.

One of the things that has been lost in the landscape of modern AAA gaming is the classic local co-op brawler and gunner experience. Games of this ilk used to be huge back in the day, whether on the arcade scene or on home consoles – Contra, Battletoads, Streets of Rage, Double Dragon, Final Fight, among others, the genre used to thrive in the early annals of gaming history.

But while large scale AAA gaming may have, to its detriment, moved on from providing those kinds of games today, there has been a resurgence of this style of game in the last few years, thanks to the efforts of independent, and smaller scale developers. While quite a few of these revivals and spiritual successors have failed to hit the mark, the rather generically named Huntdown provides a remarkably fun and exhilarating experience, living up to the heyday of the style of game it is trying to emulate, while delivering a top notch, satisfying game on its own merits that even relative newcomers to the genre will enjoy.

I remarked upon how generic the name of the game is just now, and unfortunately, that criticism doesn’t end there. The game roots itself in 1980s culture, but unfortunately, it fails to carve out an aesthetic or identity of its own. The best kinds of media paying homage to other media is the kind that brings its own perspective to the table – this is why Stranger Things, for instance, is appreciated, while Ready Player One is not. While the delightfully creative and smart Huntdown is hardly anywhere close to as creatively bankrupt as Ready Player One, its premise and its aesthetic both do, unfortunately, reek of a similar lack of originality. The setting, cyberpunk dystopia, and the graphics, at least at first glance, like any other 1980s action games.

"Huntdown provides a remarkably fun and exhilarating experience, living up to the heyday of the style of game it is trying to emulate, while delivering a top notch, satisfying game on its own merits that even relative newcomers to the genre will enjoy."

To its credit, Huntdown does attempt to put its own spin on both, with a tongue in cheek parodying of action movie and game tropes with the story, and some really clever and interesting visual elements to its design that lend the setting a lot of depth at times. Unfortunately, it either doesn’t do these often enough, or well enough – the satirical take on the action movies of the era is amusing, yes, but it’s not new, nor is it as funny as much of this game’s peers.

The graphics, while extremely well done for what they are (generic doesn’t mean bad, after all, it just means it doesn’t stand out), and while having some interesting nuances to them, are similarly so familiar that at a glance, it’s easy enough to confuse the game with any number of other titles cut from the same cloth. Thankfully, the music at least does not disappoint – the soundtrack is absolutely spectacular, and you wouldn’t be blamed for leaving the game on in the background just to let the music play. Unfortunately, however, how good the music is often does nothing but highlight how unremarkable the other half of the game’s presentation is.

This isn’t a huge problem with a game that is mechanically satisfying – I mean it does detract from the action on screen, as well as the setting and atmosphere, but if the game plays well, that’s really all that counts. 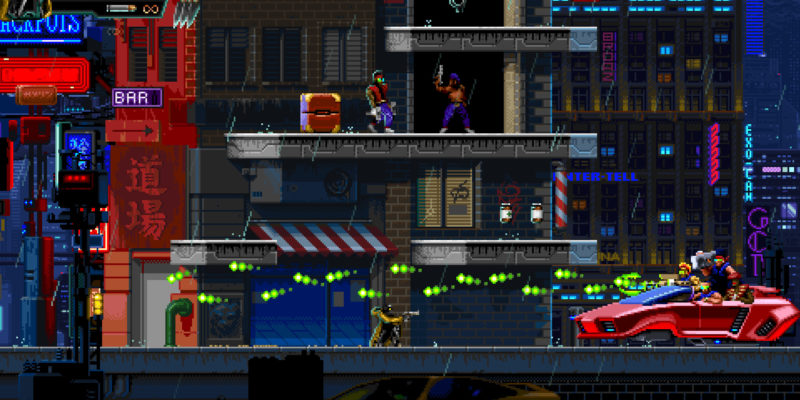 "The standard formula of this style of game blending light platforming with gunning enemies is maintained and executed to great effect as is, though Huntdown does throw in some wrinkles of its own – such as the ability to use the environment to your advantage (you can take cover in alcoves and recesses, for example, or behind crates or oil barrels – though you really shouldn’t)."

On this front, Huntdown shines. The core mechanics are simple to pick up, but an absolute joy to master, with you getting three separate characters, providing three different takes on the game’s flow and structure (with John Sawyer providing a slower, more measured take focused on pattern recognition, while Mow Man does what his name suggests, and mows down most enemies). The standard formula of this style of game blending light platforming with gunning enemies is maintained and executed to great effect as is, though Huntdown does throw in some wrinkles of its own – such as the ability to use the environment to your advantage (you can take cover in alcoves and recesses, for example, or behind crates or oil barrels – though you really shouldn’t).

Where the game shines is where it uses these elements – old and new – to create tense and thrilling encounters, or unexpected wrinkles to the level layout and design which can often force – or tempt you into – detours along the way. A lot of games of this ilk often become shallow and trite because linear and funneled design removes any actual engagement from the player. Huntdown shines on this front, with small, compact, but smartly designed levels that can thwart you as much with their layout as with their combat encounters – and at the best of times, with both in tandem.

The best examples of those instances are the game’s spectacular boss fights, which are up there with the best of the best that you can pull up from something like Contra, if not even higher up. The fights simultaneously rely on your twitch response and pattern recognition, as well as a test of your mastery of the game’s various mechanics. Huntdown, while generally relatively easy and straightforward, can be surprisingly hard hitting in these battles, punishing mistakes, and not giving you the chance to recover if you panic. It wants you to keep your wits about you, and it wants you to be at the top of your game, even as it continues throwing wrinkles in what you expect, adding complications to a deceptively simple structure, and all without breaking any of its own rules, to create some extremely creative and exciting bosses of the type that are largely lacking in the modern gaming landscape. 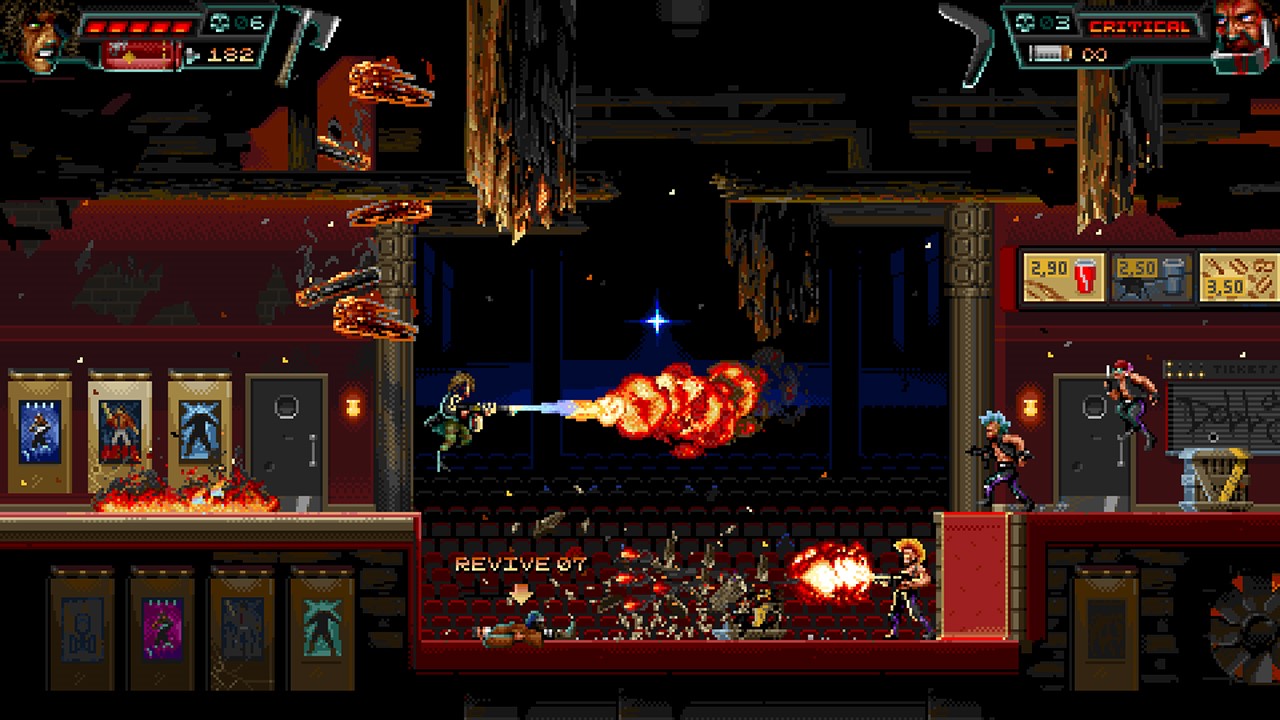 "Huntdown, while generally relatively easy and straightforward, can be surprisingly hard hitting in boss battles, punishing mistakes, and not giving you the chance to recover if you panic. "

As inventive and thrilling as these battles are mechanically, they are also the rare bursts of personality and charm from the game in terms of its aesthetic and style, with bosses looking goofy and sounding dorky, in appropriately themed arenas, and in a fair few cases, some great references to 1980s and 1990s pop culture that evoke that era while also subverting and playing with your expectations.

Huntdown also benefits from extremely satisfying co-op play, although unfortunately, it is limited only to local play on that front. While I laud the game actually supporting local multiplayer in an era where most non-Nintendo developers seem to have forgotten all about it, not including online multiplayer functionality is a bit of a misstep, in my opinion – especially when I have friends I’d love to play through this with, but can’t in the absence of online options. Emphasizing local multiplayer is good, but not even having the option for online is a bit of a bummer.

While there are enough problems with the package that it’s not nearly an effortless recommendation, Huntdown is nonetheless a very strong offering that delivers an extremely strong and compelling product, both on its own merits, as well as with respect to the greats it seeks to pay tribute to. Sharp mechanics, simple controls, satisfying design, and some delightful encounters and bosses make the game a joy, and while it’s not as much of a home run as it could have been, it’s still a great game that’s a lot of fun, and offers the kind of mechanically rooted gratification that is otherwise hard to come by in games these days.

The setup, premise, and art style can all feel generic; no support for online co-op

Final Verdict:
GREAT
While not hitting it out of the park like it could have, Huntdown still manages to deliver an extremely satisfying and raucously fun package that will appeal to genre newcomers and veterans alike.
A copy of this game was provided by Developer/Publisher/Distributor/PR Agency for review purposes. Click here to know more about our Reviews Policy.