Hunted: The Demon’s Forge is a game I first got my hands on at a Bethesda press event and was very impressed while playing 2 player co-op with a colleague.  There were so many aspects to the co-op that were familiar but in an entirely new and unique way.  In fact when it comes down to it, the co-op is really one of the major things that drives this game, which you can play split screen or online with a friend.  As soon as you jump into the game with the AI or a real person by your side, it seems you are having fun immediately.  You can either take on the role of Caddoc or E’lara which conveniently lets you switch between the two characters at certain points giving you the option of playing through as both characters or just one.  Caddoc is a master at melee or swordsmanship while E’lara is more in tune to ranged attacks with her bow and arrow.  Both characters are still able to battle through melee, range and of course magic, but they excel in certain areas of combat more than others.  One of the best features in the game though is by far the revive system as you can toss an orb across the map to revive your team mate as long as you have one. 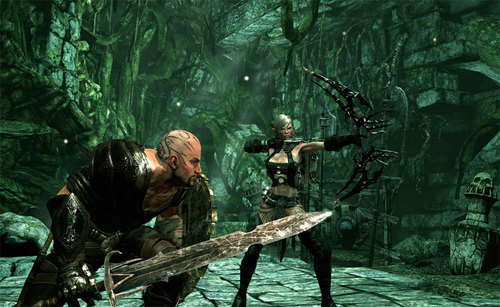 There is no real jaw dropping plot or story in the game which draws more attention to the characters themselves and how they react with each other whether it is socially or through battle.  You both start off looking to get rich while the story evolves but once again, not into something that is all that breathtaking.  This a good moment to point out that the game is much more enjoyable while being played with a friend, whether it is couch co-op split screen or online with a friend.  You can really use many different strategies together to defeat opponents.  Playing with a friend gives you that communication and that “two heads are better than one” kind of co-op mentality while you battle.  If you are playing with the AI, you just don’t have that, but the AI is not all that horrible by any means.  Sure you will have those occasional glitches where the AI is just stuck on something but during actual battle they tend to hold their own and help you out if they can, at least on the normal difficulty setting.  I might also add right here that there are no difficulty based achievements or trophies which might change your usual route of gameplay.

There are two types of skills you can upgrade, which are weapon based magic or the more traditional spell magic.  The weapon based magic are more along the likes of different moves like a battle rush or melee move.  Just as many spells are available to purchase and upgrade but generally take longer to use during battle.  One spell for instance is a fireball while another is a whirlwind that lifts all nearby enemies and then drops them to the ground.  Each spell or weapon skill can be upgraded three times until you can purchase the next level of that spell with there being three levels each.  The same goes for the weapon based skills.  You have four slots, one for each direction on the D-pad and once set in the menu, then selected during gameplay, the left bumper with activate it.  Once you get the hang of the system it is pretty and easy while the controls are nearly the same as Gears of War with the A or X button being sprint and a very similar cover system that can mean the difference between life or death. 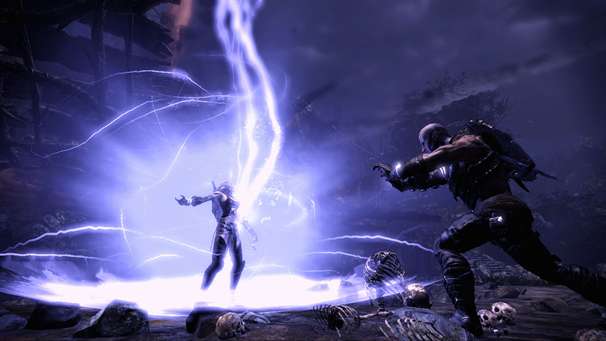 You will come across shields, swords, bows and armor from dead enemies and weapon racks where you will have the opportunity to compare their stats with your own to see which is better.  In any case shields tend to wear down so it is a good idea to do a quick check around for better weaponry laying around.  Epic weapons are always glowing once found and when you pick one up you will notice it has a certain amount of charges that you can use simultaneously with your partner for a devastating attack.  Eventually the charges run out making the weapon much less epic than it was.  There are also many challenges in the game that will give valuable rewards, for example with most of them being ‘get X amount of kills’ or ‘get X amount of co-op kills’, can give you things like extra health, extra mana slots and even the ability to carry more than one weapon at a time which can of course be very beneficial.

Now with Hunted being strictly single player to 2 player co-op, developers inXile decided to put a pretty amazing feature in the game.  I am talking about the mode where you create you own levels.. that’s right you can actually create you own dungeons down to the specifics.  You can choose the route the player will take, how many dungeons the player will have to go through, how many enemies, what kind of enemies and even how many waves of enemies the player will encounter.  In my opinion this is a great addition to the game and is what may give it that replay value people look for.  Even with what I mentioned you can do in the level creator as you progress through the game or complete dungeons, you wind up unlocking new options to create you own level like harder enemies and bosses.  The developers have uploaded level sets that you can download and play but the best part is that you can upload your own dungeon for other people to play and have it rated, or you can simply create one to upload for just you and your buddy to play.  A real unique feature that definitely adds to the game. 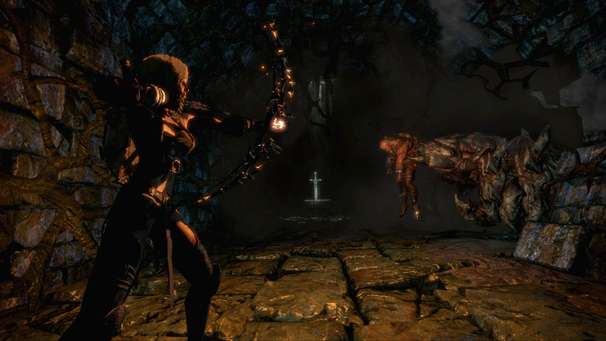 E’lara and her bow skills

Everything isn’t all amazing when it comes to Hunted though, because the game itself is tediously long.  Now I know there a plenty of people out there that cannot get enough content so with it being so long, in that specific case, you are definitely getting your bang for your buck.  I can remember many hallways that seemed endless and just running long distances just to get somewhere, sometimes even getting lost.  Once you get to a battle it can be very fun even with an AI partner… as long as they are present, but it is just getting to that battle that can be boring.  Then of course you will know a secret is lurking around a hallway and go back and forth trying to figure it out before you either give up or look it up on the internet.

Overall Hunted: The Demon’s Forge is a good game, with the graphics being alright especially when you are done with a gruesome battle and you are covered in blood from head to toe.  Searching for Epic or rare weapons is always fun especially with a friend as when an epic set is found, it usually drops an epic item for each player.  The game is one of the longest games I have seen in a long time so you are going to have to dedicate yourself as it may become boring after a while.  I cannot stress enough though, that the game is based on the characters and it is ultimately most enjoyable while playing with a friend. The developers have done a great job of keeping the game same on both the PlayStation 3 and Xbox 360, with little to no differences. Pick the game up with a buddy and I guarantee you will enjoy yourself.

Playing the game co-op is a blast. Plenty of looting for better items.

Extremely lengthy. The AI can occasionally have issues and the game lacks a good plot.

Final Verdict:
GOOD
A lengthy game that will give you hours of fun while playing 2 player co-op. Many upgrades from weapons to magic to skills will keep you on your toes.
A copy of this game was provided by Developer/Publisher/Distributor/PR Agency for review purposes. Click here to know more about our Reviews Policy.