This motion controlled Ice Age game will leave you cold

You’d think that a children’s game loosely based on a movie that makes use of the Kinect motion controller would be a winning formula(!) but surprise, surprise, Ice Age: Continental Drift – Arctic Games is unlikely to make it to the top of most your wish lists. Released to coincide with the launch of the film, this collection of 10 mini games offers story-based, tournament and free play game modes allowing you to play solo or with a friend. 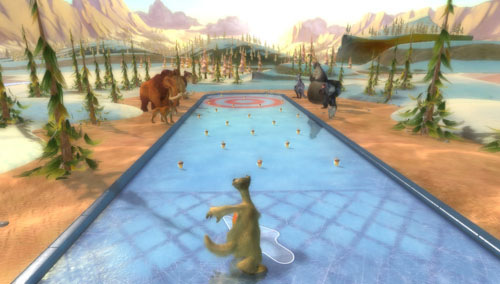 The Arctic Games – fun for all the family???

Thing is, Kinect once again fails to inspire confidence and the controls are decidedly dodgy and unresponsive. Now I’m not really the target audience for this game so I roped in some younger family members for the playtest. While I’m slightly set in my ways and not so enthusiastic about prancing about the room, I figured they’d be best positioned to cast their eyes over the game.  Their initial enthusiasm quickly waned, however, largely because the mini games rapidly become monotonous and can be insanely tricky for the younger players. For little people, the concept of not physically holding a controller seems a little alien and despite Kinect’s best efforts, they did become a little frustrated at their movements not being accurately picked up; not the game’s fault but a common problem when this hardware is used for child oriented titles.

Picture the Arctic Games as a kind of prehistoric Olympics. You start by choosing your team – either Manny and his herd or a bunch of pirates(!), and have to compete in a series of events to see who wins some “treasure”. There’s a decent variety of games on offer, of different degrees of fun and quality – all of which are peppered with cut scenes to link them together. 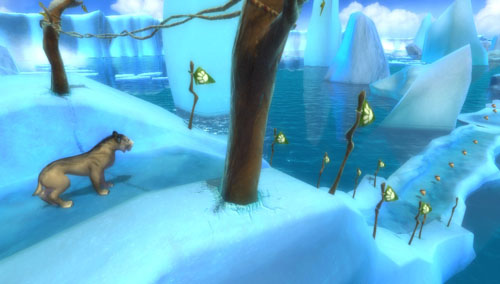 The graphics are pretty basic and nothing to get excited about

Visually, everything looks a little plain and uninspiring – and is a fairly poor imitation of the movie. The cut scenes, voices (including some of the movie’s actors) and sound effects are repetitive too. It actually feels very similar to those flash-based browser mini games that proliferated the internet a few years back.

Most of the events revolve around destroying, avoiding or sliding over ice – kind of understandable given the game’s title.  From Bob-Smashing – breaking ice bearing your team’s insignia – to Glacier Hopping – which is exactly as it sounds – the controls manage to cool any enjoyment. The other events are no better: Slip Slide, Shell Slide, Coconut Slingshot, Style Jump, Ice Smash, Scrat Cannon, Mountain Drift and Prehistoric Plumber (a carbon copy of the leaking water game seen circa 2010 in Kinect Adventures). Along the way, you’re charged with collecting acorns for bonus points. Instructions appear briefly during the loading screens but can be difficult to grasp or remember. 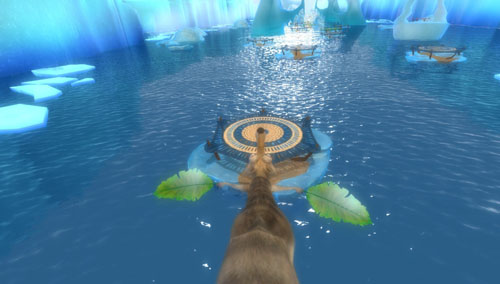 Coconut Slingshot should have been fun but proved among the most irritating. The concept of flinging coconuts towards floating targets and acorns sounds simple enough but the motion control really had trouble picking up movement. Directing and positioning the catapult therefore proved troublesome, resulting in many projectiles failing to go anywhere near their intended target. Style Jump requires you to match the poses that pop up on screen – a bit like Hole In The Wall – but it proved a hit and miss affair. Although imitating the onscreen positions perfectly, some of the moves didn’t register and points were lost. Glacier Hopping is tough too, penalising you should you misjudge a jump by taking you right back to the start. Even when stationary, Kinect somehow detected movement and sent our playable character plunging into the icy waters. Combine dodgy motion control with the fact that many platforms move, and it’s recipe for disaster.

Thing is, the monotony of each game will most likely fail to maintain the interest even of young children besotted with the films and characters; it certainly did with our sample gamers. It won’t take an “Age” to get through the main story mode and then there’s very little replay value. Kids who are fans of the film series might like this but dusting off the copy of Kinect Adventures that came bundled with the system is certainly more fun.

Will appeal to fans of the films. Children will be able to play alone or with friends as some of their favourite characters

Kinect works horribly. Games are boring for older players and too tricky for its intended audience