ilomilo was officially released on Xbox Live today for 800 Microsoft Points ($10).  This game is extremely addicting so be careful.  You point of the game is to join ilo and milo the main characters together again in each level of this puzzle game as they are separated in the beginning on rows upon rows upon columns of blocks.  The game can be played by yourself where you control ilo and milo or in local co-op where one player controls each character.  That is the one disappointing feature about the game, is that there is no online co-op.

As you progress the puzzle get harder and you be able to carry blocks with you to build a walkway or hand of to your buddy to do so.  Just meeting up with each other is not all there is to do as you can find many secrets by exploring hard to get places this will eventually get very tricky.  You will probably find your self looking for a guide on how to get through some parts as the difficulty gets heavy.  You can find single blocks and blocks that once put down extend them selves longer than just one black that you can conveniently carry with you on your back one at a time.

The overall look of the game is ‘cute’, but I am a 26 year old male that could not put down the controller especially playing co-op locally with a friend.  The worlds in the background get more interesting and unique as you progress as well as challenges added to the puzzle making them more creative like monster looking thing that eats certain blocks but only goes in certain directions.  It can be quite complicated to explain some of the challenges, but as I said before this is one addicting puzzle game.  There is a great feeling of satisfaction once rejoining ilo and milo together in each level. 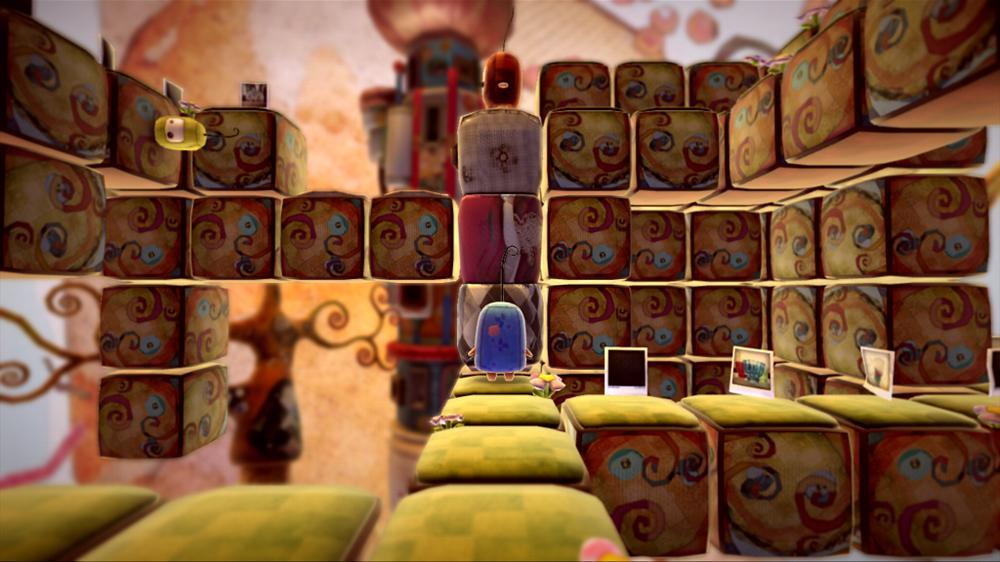 The world of ilo and milo

You can gain avatar awards which include probably the most flamboyant t-shirts I have ever seen on an Avatar along with little ilo and milo as your prop pets.  Playing ilomilo will also unlock other things in the arcade games Raskulls and World of Keflings.  You can also unlock other modes in the the game which are mainly just little extra bonus stages and such.  The soundtrack is also pretty good as well while you can even unlock an achievement by using the menu options as an instrument to go along with the title theme song.  Like I said the level designs are impressive and although frustrating at times it is still addicting making it a great puzzle game.

The game is a unique and highly addicting. Avatar rewards as well as unlockables in other arcade game.

No online co-op, only local.. major bummer, they should have went the extra mile to make it online capable.

ilomilo is a very creative and challenging puzzle game making this a cute game for people of all ages as you must reunite ilo and milo on each stage to complete it.

A copy of this game was provided by developer/publisher for review purposes. Click here to know more about our Reviews Policy.
Tagged With: ilomilo, xbox 360, Xbox Live Arcade, xbox live marketplace