As inFAMOUS starts you see what happens to Empire City. Before your eyes the city is engulfed by a huge ball of lightning. You play the role of the superhero or villain, which will be your choice, of Cole McGrath. The city is set-up as a sandbox similar to the cities in the Grand Theft Auto series, and the city appears to be dead. If you are a superhero the people of the city will look upon you as cheerful and be happy to see you, but this doesn’t show that much. If you are a villain the city people look upon you as someone evil and are scared of you. The game gives you the feeling of having the power to destroy anyone in your path if you so desire.

If you are a superhero (good) then your character apperars to be handsome and you harness the power of blue electricity. If you are the villain (bad) then you have red electricity with bloody, gory looking veins flowing through your body while appearing on your head. This just adds to the more realistic feel of the characters.

After the city goes through the electricity ball, Cole talks and informs you a little of the back story. Cole tells you that he was caught in the engulfment of the blast. Unconscious for weeks, the city turns to turmoil with murders, rape, and thievery. This is all normal now in Empire City because there were no cops to stand up against the now ruling gangs of Empire City. Like everywhere, there will always be the ones who stand up against them, but they all fought and got killed. The rest  of the citizens just fall into place and let things go on how they are because Cole then informs you of some kind of plague that hit the city causing the government to quarentine to area. This just made all the innocent bystanders helplessly trapped with the murdering, cruel, physcos. But he then gives you a hint on which he can or cannot help. Remember it will be your choice, with his new founded power…electricity.

Since he runs on electricity, he can run-out. Cole has the power to manipulate energy by taking it from objects. Remember the good old rule…energy cannot be created nor destroyed: the law of conservation of energy. So he can’t just make electricity. You can get electricity by sucking the power from simple power lines to anything that runs off electricity.

You are given multiple electrical powers in the demo. These include: Lightning Bolt, Shockwave, Shock Grenade and Thunder Drop. Each have their own advantage but you will mainly be using the shock grenade and lightning bolt.

One of the coolest features in the demo is sliding at crazy speeds along power lines, devouring enemies if you come across them. You also get to hover at high speeds and manuever in crazy ways to do some crazy manuevering. You get to climb up buildings similar to the climbing experience in Assassin’s Creed. It is not as well implemented but still very very good.

In this demo there are four missions which include two main missions and two side missions. So you also get to play two good and two bad characters. There is not really much difference in powers; they are both equally great. This is one of the biggest demos that I have ever played and one of the hardest for it being on easy. You have the choice of changing it to easy, medium, or hard. Easy has some challenge to it as you will die when you play. I promise that. 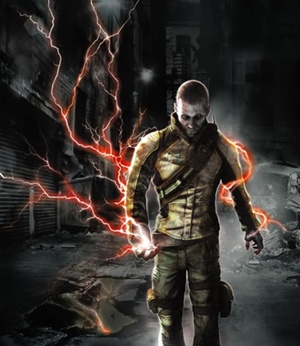 So overall what we have seen is a great game but a few glitches here and there by being able to walk through fences. But I am going to go out on a limb here and say something I havn’t heard anyone say; like I compared Assassin’s Creed to it earlier, it seems to me that it might be a little repetitive. But overall it is a good demo, so do you have your copy pre-ordered? Because I know I do.