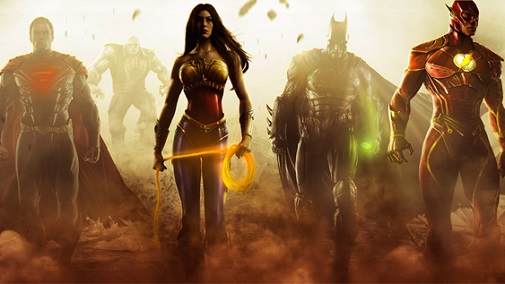 Looks like Injustice 2 is real, after all. A few days ago, we reported that Warner Bros. and NetherRealms’ DC themed fighter was going to get a follow up next year- and now it seems as though those rumors were right, because a promo image for Injustice 2 has leaked.

You can see it below- it seems to be pretty legitimate to me, personally. This lends credence to the entire rumor from last week, which means that the sequel is probably slated for Xbox One, PlayStation 4, and PC, and that it is set to launch some time next year. Given Sony’s partnership with Warner Bros. with the original Injustice (which launched on PS Vita, as well as PS4, but not on Xbox One), it seems likely that the sequel, should it be real, will be announced at Sony’s conference at E3 this year.

Are you excited for Injustice 2? Let us know in the comments section below. Hopefully it will be far less disappointing than Street Fighter 5 was…