Insomniac talks about how Fuse has changed over its development cycle

"Every IP that we've created has gone through massive changes." 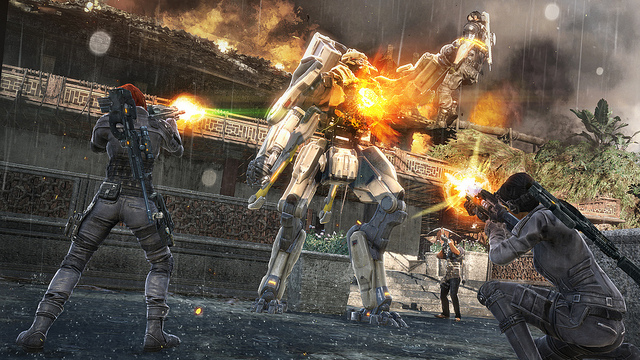 After Insomniac rebranded their all new multiplatform title Overstrike as Fuse- changing everything from the visual style to their focus on the story, now focusing more on gameplay aspects- they received a lot of negative reception. Fans said they changed a potentially fresh and innovative new IP and turned it into something generic.

However, Insomniac says this change the new IP has gone through isn’t really that much of a big deal, since all their franchises so far, according to them, have undergone massive changes in their development cycles.

“Every IP that we’ve created has gone through massive changes,” said Insomniac’s Ted Price while speaking with Eurogamerat a recent EA press event. “Ratchet was completely different at the beginning. Resistance was something altogether different while we were developing it.

“Fuse has gone through less of a change – however, it’s a change that’s occurred a little bit later in the life cycle, and I’m sure it surprised people because we’d already released something about the game.”

He then went on to talk about how the development team shifted its focus from story to gameplay midway through.

He said: “We realized early on that story wise we were focusing on Fuse – but it wasn’t tied into gameplay at all.

So we shifted the focus of the gameplay to Fuse as well, and started really delving into the Fuse weapons and progression system and figuring out we can have Fuse drive both gameplay and story.

“Then the game’s identity shifted to be much more about Fuse than what we had before. Furthermore we also started cutting loose with the weapons, and really going over the top with much more visceral weapons, and at the same time we went a little more grounded with the game’s story.”

“The game does take place in a very stylized universe,” he continued. “This isn’t a military sim by any stretch of the imagination. The game still has humour, although it’s a more sophisticated humour and we can tell a more sophisticated story with the tone that we have now.”

Fuse, of course, is Insomniac’s first multi-platform game, after having developed Sony exclusive franchises Ratchet and Clank and Resistance. “This is our first multi-platform game,” Price said, “and we began working on a brand new engine and toolset for this game several years ago. We wanted to make sure that when this game came out it held its own against games that are on their second or third iteration. For us, being a new IP at this point is exciting – because we hear from gamers all the time how they’re tired of seeing sequels. It’s going to be fun seeing what their reaction is.”

When asked about how they decide what kind of nature and soul they want for their games, Price said: “This is something that we’ve been thinking about for a long time. There’s been a lot of discussion at Insomniac whether to go super family friendly, campy or more serious. For us, it was a hard decision to make – but it’s Insomniac driven. It’s our IP, so it has to be.”

“What you see will continue to develop visually,” he said, talking about Fuse’s artstyle. “We definitely listen to the feedback from that trailer – what we showed was a very different part of the game, and the characters actually now look different in what we’ll be showing next.”