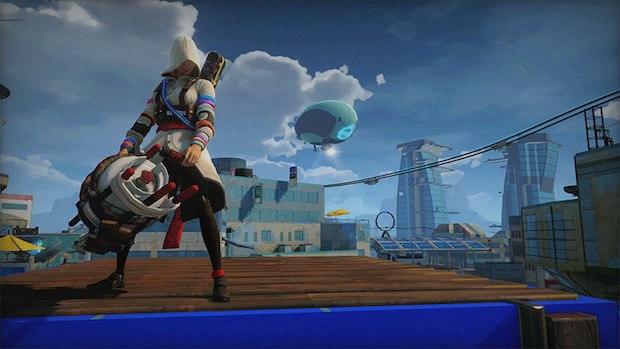 Insomniac Games’ Sunset Overdrive looks like it will be a blast, and for multiple reasons- not only does the gameplay look fun, and the graphical style completely unique, but the game, in true Insomniac tradition, looks like it will have a hell of a sense of humor too.

Responding quickly to the current controversy surrounding a lack of female characters in Ubisoft’s games (particularly Assassin’s Creed Unity), and Ubisoft’s less than elegant response to the criticism, Insomniac have released a series of pictures on the playable characters in Sunset Overdrive, a lot of which happen to be female, such as the one above…a female assassin.

And then there is this one- it’s a bit too on the nose, maybe, but it is rather hilarious all the same. It also rightly lampoons Ubisoft for its lack of inclusiveness and its completely misguided response to that; it also brings a lot of attention to a very unique looking game, and that can only be a good thing.

For more on Sunset Overdrive, check out our hub page here.