Posted By George Reith | On 27th, Aug. 2012 Under Reviews | Follow This Author @GNReith

There was a time when WW2 shooters seemed to be pretty much the only genre getting released. As the tide has slowed over the years though, some games keep up the banner of interpreting the second great war in game form. Iron Front is one such title but, rather than go for fast paced action, it aims for a much slower paced simulation. It certainly adds a complexity to the usual point and click mechanics used in arcade shooters, but its ambition leads to a whole host of control and stability issues. 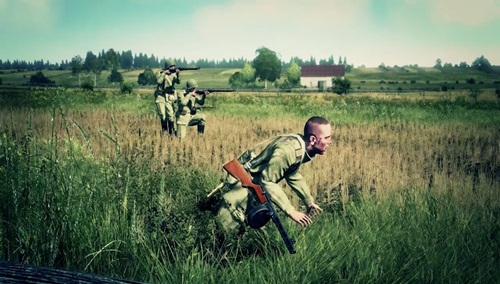 The scale is huge, but so is the complexity.

The main issue I normally have with WW2 shooters is the repetition involved. I can barely even begin to imagine how many damn times I’ve fought in a virtual trench battle against the axis powers and all their might. Iron Front offers a slightly unusual take then, by giving you the choice of either a German or Russian single player campaign to go through. Being able to actually play from the side of the Germans is certainly a refreshing take on a genre that is often morally simplistic to the point of retardation, and the 1944 time frame means the axis powers are significantly weaker than in the heyday of the war. The mission variety itself is also engaging, with stealth and tactics coming into the fray far more than other WW2 shooters. It’s a shame the actual narratives aren’t especially emotive or engaging, however. It’s not helped by the writing or voice acting either, two elements that are rather lacking in Iron Front. You do have the option of playing through both campaigns in their native languages, a pleasant feature that certainly makes up for the awful English dubs, but this is still not going to be the most inspired representation of World War 2 you’ve come across.

Whilst the audio elements of Iron Front don’t immediately impress, it is certainly very competent visually. Being based on the ArmA 2 engine, Iron Front looks just as good as everyone’s favourite modern military simulator. Whilst the ArmA technology grants gorgeous visuals and epic scale maps that make for a decent first impression, it seems that developer Deep Silver have struggled with some of the technical elements of the engine. Glitches are everywhere, and they are a constant source of amazement as to how Iron Front managed to pass quality tests at all. It’s odd as well that even ArmA 2 doesn’t have this many glitches. My experiences with ArmA have always been somewhat rocky, but Iron Front is on a whole new level. Far from the odd audio and graphical bug, Iron Front outright froze my system on multiple occasions, demonstrating debilitating bugs that ruin the game’s immersion and force time-wasting system restarts regularly. 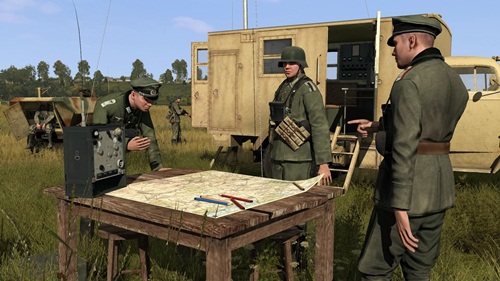 Iron Front covers the same timespan as the average school history lesson, and the narrative is about as interesting.

Once you get past these technical blemishes, the ArmA 2 engine continues as it usually does; being a bit of an acquired taste. The gameplay is certainly deep, and it offers an impressive level of variety. You can run and gun as would normally be expected, but the fact that you can often be felled with a single bullet means you’ll find it much safer to order your squad to aid you. You can also hop into various vehicles and aircraft should it take your fancy. All the vehicles and weapons are realistically modelled after their historical counterparts and you subsequently must adjust sights for different target distances and take bullet drop into consideration as you would on a real weapon. It all adds up to give a sense of realistic warfare, with various squads and tank units all vying for combat supremacy in huge environments. This simulation style realism comes with a price, however, as the controls are cumbersome at best. There is certainly a learning curve that can be satisfying, but some controls seem downright unnecessary. Going prone and crouching are some such controls that really don’t require three buttons. So many games can get away with one button for changing position, so why does Iron Front need so many? This is more a criticism with the ArmA 2 engine than Iron Front specifically, but it is easy to become frustrated by such superfluous design choices. Make no mistake; Iron Front is hardcore, often to a fault.

If you can get over such control issues, the experience can be quite rewarding. The single player missions and campaigns are lengthy and fairly varied, and the scale of the multiplayer battles is noteworthy indeed. There are a few issues with the netcode that seem to result in occasional lost connections and latency spikes when playing online, but it’s generally a well accomplished element of Iron Front. With servers supporting up to 64 players, and the ability for each of these players to purchase AI units that they can then command, the multiplayer offers a deep RTS element to its game mode that helps differentiate itself from other online shooters. 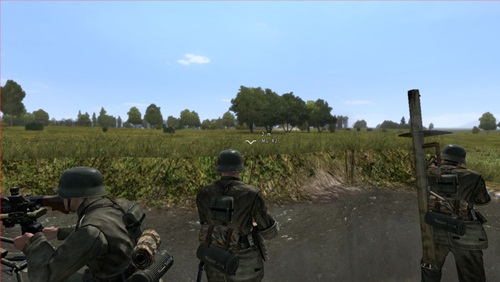 It’s a bit awkward when the most exciting thing about playing Iron Front is the fact that hasn’t frozen in at least ten minutes.

There’s plenty to like in Iron Front on paper, but in practice the game comes off as a little soulless. There are plenty of interesting takes on WW2, but the game is ultimately just a bit flat. Intriguing sections are liberally spaced throughout, but you often have a myriad of boring things to micromanage before you eventually get there. Granted, this is a simulator where a slow and methodical pace is the norm but, even in comparison to other military simulators, Iron Front can get pretty dull. Unlike ArmA 2 which passes the technology off with enough finesse to offer great immersion, Iron Front’s poor audio elements and myriad glitches prevent it from ever becoming truly engaging. There are plenty of military and WW2 enthusiasts who will find Iron Front’s level of detail exhilarating but, as a game, it can often be too frustrating to actually get to the good stuff. If you just want a realistic but enjoyable shooter, look elsewhere, but if you live and breath WW2 strategy, then this could be your cup of tea.

A WW2 simulator powered by ArmA 2, Iron Front offers an ambitious and accurate take on the second world war, but one that is ultimately let down by technical flaws

A copy of this game was provided by developer/publisher for review purposes. Click here to know more about our Reviews Policy.
Tagged With: Deep Silver, Iron Front - Liberation 1944, pc