Iron Man 2 is an action game published by SEGA and developed by SEGA San Francisco on the PS3/Xbox. There are also ports available for Wii, PSP and iPhone platforms, although these are developed by other studios. This review is of the Xbox version. The game is set after the events of the film of the same name, and was launched just days after the film’s international release. Players can choose between Iron Man and War Machine for most missions, although some will force you to play as a particular character for plot reasons. The levels are played in the third-person with an onscreen HUD, and players can switch between walking/hovering and flight-mode as means of traversing the levels. Compared to the first game , Iron Man 2 has been improved somewhat. Flight controls are improved and melee combat is fixed. Enemy AI has been overhauled meaning no more banzai-rushes on hard difficulty & new tactics implemented and the ability to switch weapons during gameplay has been included.

The player starts off as Tony Stark in his Iron Man persona and later in the first level switches to control of War Machine. These two characters are pretty-much interchangeable: the only real differences being (aside from the cosmetic) Iron Man’s ability to equip repulsor and unibeam weapons, whereas war machine gets his signature shoulder-mounted missile launcher & minigun; and some different melee moves. Many weapons are available to both: the missile launcher, rocket launcher (yes, they are slightly different), blaster/shotgun and laser are all capable of being equipped to either character. Completing each mission will reward the player with “Field Data” to unlock upgrades. Bonus amounts are awarded depending on completion time and damage taken. 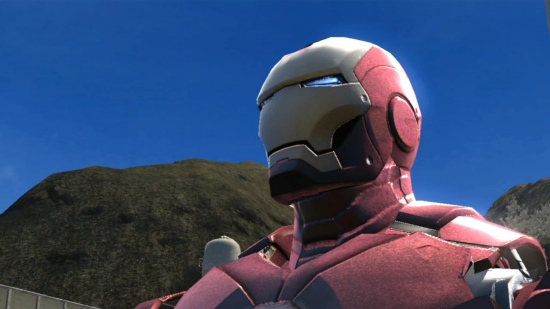 The other difference between Iron Mand and War Machine is that one’s black. But you can’t tell with the suits on.

After the first – and each subsequent – mission, the game returns the player to ‘Headquarters’. This is a rotating menu where the player can research new upgrades and fighting moves, customise weapons by changing ammo type and enhancement modules, and change the loadout for each unlocked suit. Each new suit is unlocked after completing one of the missions, and variants include previous marks from the films as well as the comics. Oddly, there is one suit which you are forced to use during one level (the light ‘travel’ suit seen in the film) which is not unlockable. Also, the only difference between each suit is cosmetic – the stats and weapons remain the same – and there are no upgrades for the suits, only the weapons. The coolest-looking suit, Ultimate Iron Man, is only unlocked following the final boss fight, which is a shame as there is little-to-no reason for you to replay the game.

Only if you are hunting achievements/trophies would you possibly be motivated to replay the missions; to beat bosses as both characters OR acquire enough field data to purchase every upgrade. Hint: this is not necessary in order to smash through the game. Another lame trick implemented in an attempt to force replays is the non-stacking achievements for completing the game on different difficulties: beating the game on the hardest setting will not also earn the achievements for medium and easy, meaning more hours of tedium for the dedicated trophy hunter. Most achievements can be obtained simply by playing through the course of each level with no particular effort. 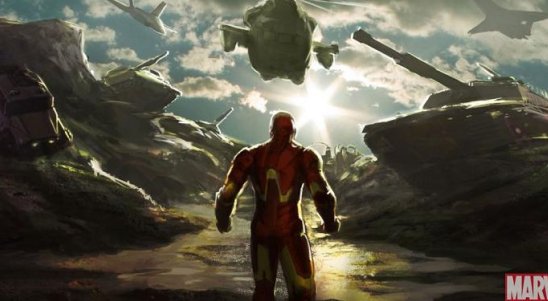 There is something very wrong with a game where helicopters take more hits than tanks.

The missions revolve around dodging enemy fire (usually whilst hovering in circles) and holding down the fire buttons, or pummelling a drone in close combat.  Occasionally you will be prompted to deflect missile fire, but not doing so carries little penalty other being pushed to the ground, after which you can instantly return to flight by holding the ascent button. Dodging (by use of the evade button) makes missions even easier. There really is little point to the upgrade system other than to make the game even more straightforward, as even inexperienced players will not find it overly difficult even on the ‘Formidable’ setting. Even the mini-bosses, the “Armigers” – tank turrets on legs, can be dispatched swiftly by hovering round them and holding down fire until everything is dead.

The flight controls are much less broken than in the original, making it easy to perform as many strafing runs as you like. However, there is not as marked a difference in speed between Flight Mode and hover as it felt there should be. Using the Evade button to dash is also not as effective as the game would have you believe, so you’ll be toggling in and out of Flight Mode frequently; but often you are tethered to your escort or a restricted area. Ascent and descent are controlled by two of the face buttons, whilst the other two control fight combos. The shoulder buttons control evasion, targeting and weapons respectively. The player can switch between equipped weapons by pressing Left and Right on the D-Pad. Holding Down will either engage invulnerability or select a target for REDACTED TO PREVENT SPOILERS 😉 Meanwhile, Up appears to do nothing.

Graphically, the game is a huge disappointment: in terms of face-modelling, textures and environments. When I was presented with the opening cinematic, I honestly thought that Tony Stark was being portrayed as Chinese. He looks more like Uncle Bill from Police Story 1 than Robert Downey (See picture). The textures are inexcusable – It was as though I had accidentally inserted a PlayStation 1 Game into my Xbox! There is no such thing as reflections, or even depth. Don’t even get me started on the textures used for the S.H.I.E.L.D Operatives. The environments are barren, with few features, and either restricted to a circle or otherwise tethered by “instant-kill” zones along their edges.

The similarity is uncanny -give Stark a shave and he’d be his twin!

The soundtrack is probably where this game scores highest – although given the poor offerings in other departments it’s not particularly hard to do that. Although Robert Downey jr did not return to voice the videogame character (he did so in the first videogame), Samuel L. Jackson and Don Cheadle lent their voices to their digital counterparts – Nick Fury and War Machine respectively. Other voices were done by veteran voice-actors Steven Blum and Phil LaMarr.

Ultimately, this game is not one that serious players should buy. It’s short, looks bad, and plays like something you’d find in a museum. That said, if you’re a dedicated fan of Iron Man, you may just find enough justification to part with your cash. Best found in the bargain bin or pre-owned section than bought new.

Very last-gen graphics, Only 5 hours long, Not challenging even on hard, No real difference between characters/suits, No replayability.

When I was presented with the opening cinematic, I honestly thought that Tony Stark was being portrayed as Chinese.

A copy of this game was provided by developer/publisher for review purposes. Click here to know more about our Reviews Policy.
Tagged With: iPhone, Iron Man 2, ps3, psp, Sega, Wii, xbox 360