Apparently, if given the choice of a superpower, the majority of people would want to be able to fly. It’s probably something to do with that sense of freedom and the ability to go wherever you like, climbing high into the skies, looking down on everyone else below. Perhaps it’s this deep-seated desire that makes flight sims so popular?

The latest to make it onto our consoles is Jane’s Advanced Strike Fighters – or JASF – from Evolved Games – an arcadey flight sim that unfortunately fails to really take off. 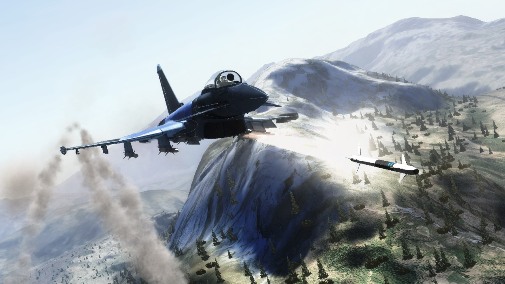 JASF boasts loads of planes from the past three decades

The main selling point is perhaps the 30 different fighter jets you will be able to commandeer, including the F-35 Lightning II, the F-22A Raptor and the fifth generation PAK-FA(!) Spanning three decades, there are planes from the US, Russia, Europe and China – all with varied abilities such as manoeuvrability, payload, armour and speed. On paper, it’s a nerd’s paradise but in reality whichever plane you pick doesn’t really seem to make too much difference.

With HAWX 2, Ace Combat, Blazing Angels and even Heroes Over Europe also fighting for air space on our humble consoles, JASF was always going to have a turbulent time. 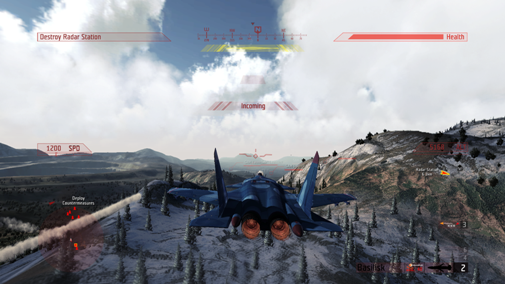 The campaign is fun but fairly short lived

JASF’s campaign mode is fairly brief with only 16 missions on offer, spanning an impressive sounding 65,000 square kilometres of mountainous terrain, arid landscapes and cities. As squadron leader Razor, it’s your job to help reunify the fictional state of Azbaristan after years of civil war. Expect dogfights, seek and destroy missions and escorting aplenty.

After a text heavy briefing screen and some inadvertently humorous narration involving hugely stereotypical accents, you’ll find yourself ready to take off. Each mission largely involves flying to the marker in the distance, waiting for missile lock on your selected target and then blowing it to smithereens. The weapons don’t seem to vary too much in terms of effectiveness either, which takes away some of the tactical nature of the game. The standard Cobra missiles are well suited to both ground and air targets and seem to do the job admirably so you’ll rarely need to switch. While blowing up air fields, radar installations or other important strategic locations, you’ll come under fire from AA guns, SAMs, enemy fighter jets and so on. The missions are fairly enjoyable but flying from A to B with the occasional diversion thrown in does get slightly repetitive after a while. 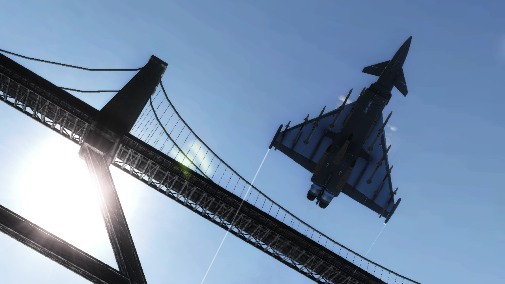 PC-based flight games are known for their accuracy, thanks in part to the myriad keyboard controls that are almost as complex as those cockpits in real life. Transferring this kind of simulation to a console is nigh on impossible and you’re limited to the buttons and bumpers controlling little more than pitch and roll, throttle, yaw and the afterburners. Countermeasures and guns are activated  with a simple button press.

It all results in a very arcadey kind of game. Take off is simply a case of depressing a button and pulling back a little on the stick. Within seconds you’ll be soaring through the air with the greatest of ease, pulling off loop the loops and spins, coasting along the ground and occasionally skimming trees – just to liven things up.

Graphically, it looks decent enough but it’s nothing special and you won’t find yourself too distracted looking at the environments while in the midst of a firefight. The textures, colour palette and landscapes are just a bit bland – although the planes do look nice! 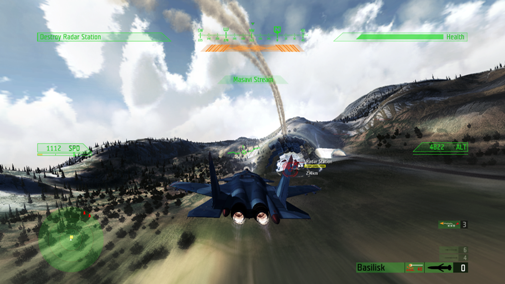 Online can be fun if you can find any full lobbies

Besides the single-player campaign, JASF’s multiplayer mode pits up to 16 players against one another in dogfights, or charges them with other missions such as attacking the enemy’s base or chasing down a designated pilot… apparently. We searched for matchups but were unable to try out some of the game modes, spending most of our time on our lonesome in the lobbies. On the odd occasion we did come across a likeminded soul, we actually found the camaraderie to be quite entertaining and the online modes fun. Campaign missions can be flown co-operatively with a few people if you fancy too – and it does make quite a difference with a wingman along for the ride.

To be honest, JASF is not the game I wanted it to be. Quite whether you’ll get value for money from the short campaign and limited online matchups is debatable. For sure, this is one to pick up if you can find it for a bargain price. Failing that, it’s worth a rental so you can fulfil your dream of taking to the skies and doing a few barrel rolls.

It's got pick up and play appeal thanks to simple controls. The missions are fairly varied and are enjoyable. Playing with others online is great

Campaign is short, and it's not always easy finding people to play online. Lacks longevity

Final Verdict:
MEDIOCRE
JASF hopes to fulfil your dreams of being Top Gun, flying high-powered jets and wiping out the bad guys
A copy of this game was provided by Developer/Publisher/Distributor/PR Agency for review purposes. Click here to know more about our Reviews Policy.