Joe Danger goes to the movies, but does he rule the box office of gaming?

The original Joe Danger was a very interesting and entertaining platformer. Playing as a stuntman, you essentially had to fulfill objectives on the fly but do so as quick as possible. Additional objectives and unlockable levels added to the overall replay value. And so we pick up from there with Joe Danger 2: The Movie. Joe has made his way to Hollywood, starring in famous, action movie scenes that satirize well-known blockbusters. But has Joe Danger 2 hit it big a second time? 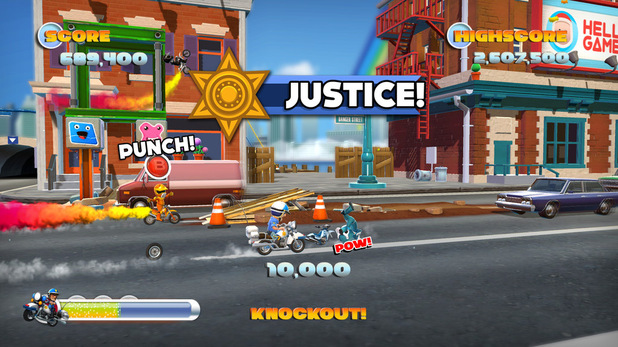 Let’s make things clear: Joe Danger 2 is a fun game. You snow-mobile, jet-pack, ski, race, dirt-bike and straight-up style and profile through the sets like a mad man. There’s a great amount of variety, and it’s amazing how the game seamlessly combines platforming objectives across a race-course spectrum. You’ll be stopping missiles from launching, bumping off rival riders, executing front flips and back flips and generally pushing the tempo. You’ll be challenged to duck, jump, speed up, reverse, escape sensors, land on point targets and so much more. This isn’t even accounting for the myriad of challenges you can complete, from time-based challenges to star-collecting, to assembling all the letters of “DANGER”. Completing missions and objectives earns you stars, and stars let you unlock further missions.

Now, keep in mind, this is a good-looking, fun, fast, smooth game. You know what else it is? A time-sink. Because as fast as free as you want to get through levels, speed is usually the best way to get laid out. Mistiming jumps or ducks gets you laid out. In fact, you’re in so much, ahem, danger in this game, with the screen filling up with objects, projectiles and your director barking out instructions that at times, it becomes a little overwhelming. And there’s nothing like missing the one single mark at the end to make you want to hurl the controller out the window (after careful contemplation, of course). Joe Danger 2 is hard, make no mistake. 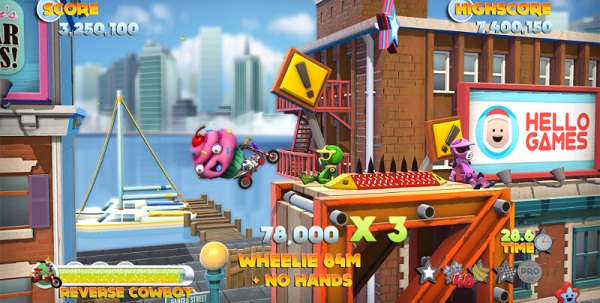 Oftentimes, getting through a level is as much about paying attention and hitting the right buttons at the right time rather than rote memorization. So it won’t have the hardcores getting their Contra on, but this level of challenge that is fair but unrelenting is welcome. It in fact adds replay value to the game. Just be aware that if you’re here for the racing, you’re going to have to adjust for the excessive platforming.

If you find yourself fully immersed in the title, or if you just want more of the same as the previous game, then rest assured, Joe Danger 2 has you covered. There are several movies to play, all with additional scenes beyond the amount needed to progress in the Movie Mode, plus a Director’s Cut at the end. You can also go back and try to beat your best time, along with that of your friends, or engage in some competitive multiplayer. A robust level editor is also included, and you can share your diabolical creations online. 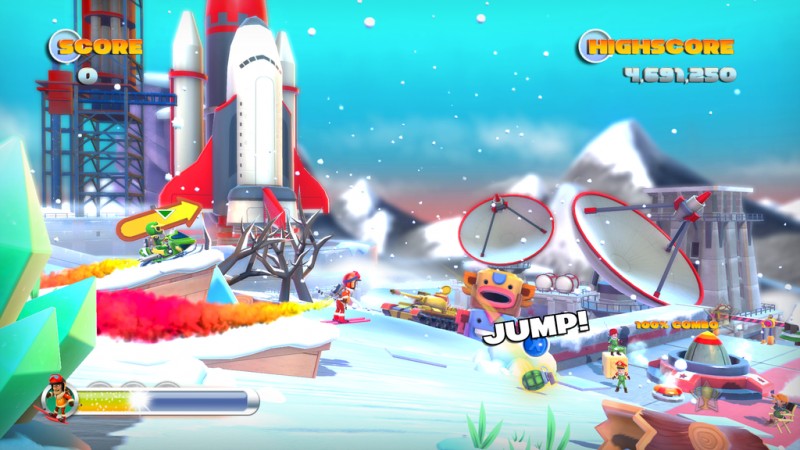 Joe Danger 2 is a visual and aural frolic, combining frantic gameplay with tough challenges and strong replay value. It’s not the next evolution, and some people may not even liken it to being a true sequel. But it’s tons of fun, and anyone looking for an interesting twist on either racing or platforming should definitely give it a look.

Stringent difficulty and multiple retries needed. Not very improved or better than the original. Heavier emphasis on platforming.

Final Verdict:
SUPERB
A great albeit punishing racing-platformer with plenty of fun and yes, Danger.
A copy of this game was provided by Developer/Publisher/Distributor/PR Agency for review purposes. Click here to know more about our Reviews Policy.