I’ve recently seen a rather unusual turn around in the cultural perception of the Wii. What started out as as little more than a joke cast off by the “hardcore” 360 and PS3 owners, high quality Wii titles like Xenoblade Chronicles and The Last Story have finally shown that the console is actually capable of worthwhile gaming experiences. All of this groundwork is easy to forget, however, when a game such as Jungle Kartz pops through my door. I’m sure the folks over at Nordic Games tried their best to create a fun Mario Kart alternative, but I’d sooner someone shoved a dead cat through my letterbox. 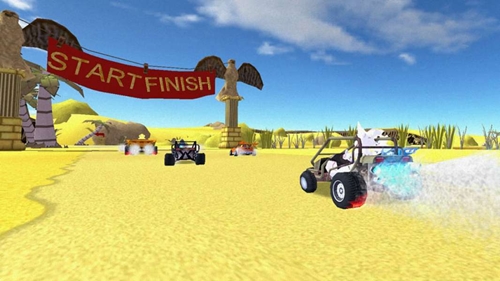 Yep. That’s really how the game looks. No jokes

This is normally the part of the review where I give a brief summary of the story, but Jungle Kartz doesn’t have one. This isn’t necessarily a bad thing for an arcade racer, but I felt duped after the blurb promised me I could “race as 8 fun loving animal characters.” I would describe the character designs as anything but fun loving. At best they’re bland and predictable, at worst they’re uncanny and ever so slightly creepy. The tracks share a similar fate of mediocrity. There are certainly a decent amount of them, with 32 in total looking good on the back of the box, but they’re all just really boring to race around. The Mario Kart comparisons are unavoidable, and the lack of the memorable track designs seen in Mario’s racing attempt make Jungle Kartz seem like amateur hour by comparison. Certainly JK doesn’t have the Mario world to rely on for its kicks, but you think the tracks could have been made at least slightly more exciting than the usual loops and figures of eight.

An even greater sin occurs in the presentation of Jungle Kartz. It looks like a PS1 game. The textures are unbelievably bland and grainy and the character designs jagged and uniform, with the only saving grace being how sickly sweet and happy the visual tone is. The use of audio isn’t much better. It just seemed really quiet and in the background the whole time. It was largely irrelevant and did little to improve the experience in any meaningful way. 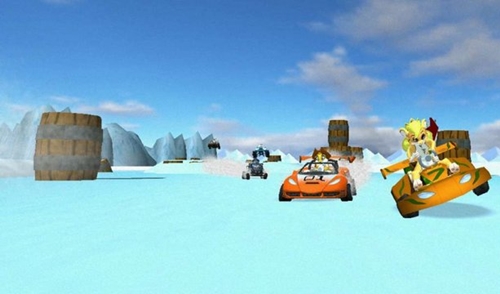 And of course there’s an ice level…

These errors would be forgiveable if the mechanics handled well, but they fall flat as well. The handling is terrible, with the karts feeling like they’re made out of paper. The drift function is ever present, but normally it just causes you to loose what little traction you have, effectively penalising you. Drifting is the classic skill required in all racing games, so suddenly having it as a serious impairment to racing is an unpleasant shock to the system indeed. Weapons also litter the tracks as in Mario Kart, and you can use said weapons to lay traps and shoot at your opponents. That’s the theory at least, but a fair few weapons just don’t work at all. The few that do offer little in the ways of hit confirmation, making them a disappointingly underwhelming element of Jungle Kartz.

The real killer is that there is no feeling of progression in Jungle Kartz. The single player offerings are a poor show, with quick races, time trials and lacklustre competitions as the only solace for the lonesome gamer. Things get much more bearable as you rope in some friends, but it still does little to mask the poor collision detection, dodgy racing mechanics and uninspired track design. The other real issue that becomes apparent after a few plays is the lack of controller support. Granted, you can choose between motion controls and a remote and nunchuck affair to gain analogue stick control of your vehicle. Why then couldn’t we also have classic controller or Gamecube controller support? 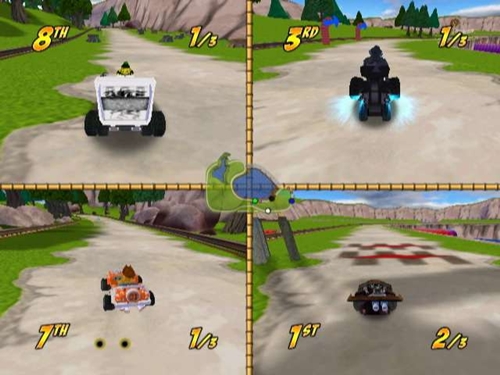 Split-screen; the only way this game is bearable

There are very few redeeming features to objectively recommend Jungle Kartz to anyone. My instant gut reaction is equally unfavourable, as JK is almost so bad that it made me depressed just playing through it. This is clearly an attempt to prey on the wallets of the less discerning Wii owners. Either that, or it is honestly Nordic Games best stab at a racing game, in which case that is truly depressing. Regardless of how it has come about, Jungle Kartz is a load of old rubbish, and you’d be a fool to think about paying for it. Avoid like the plague.

It works, Decent amount of tracks, It's not another mini-game compilation or dance game

Final Verdict:
POOR
An awkward and lifeless attempt at a party racing game, Jungle Kartz may offer a brief distraction when played with friends, but even that is an ambitious call for this clear example of shovel-ware
A copy of this game was provided by Developer/Publisher/Distributor/PR Agency for review purposes. Click here to know more about our Reviews Policy.