Jurassic World Evolution 2 – 13 Features You Need To Know About

Jurassic World Evolution was easily one of the biggest surprises of 2018. You normally wouldn’t expect a licensed game to be anything more than middling, but Frontier Developments took the beloved license and made an excellent dino park management simulator out of it. Its upcoming sequel, Jurassic World Evolution 2, is looking even more promising, seeing as its building on the solid foundations laid down by its predecessor with exciting improvements and refinements. Ahead of its looming launch, here, we’re going to talk about a few key talking points from the game that you should know about. 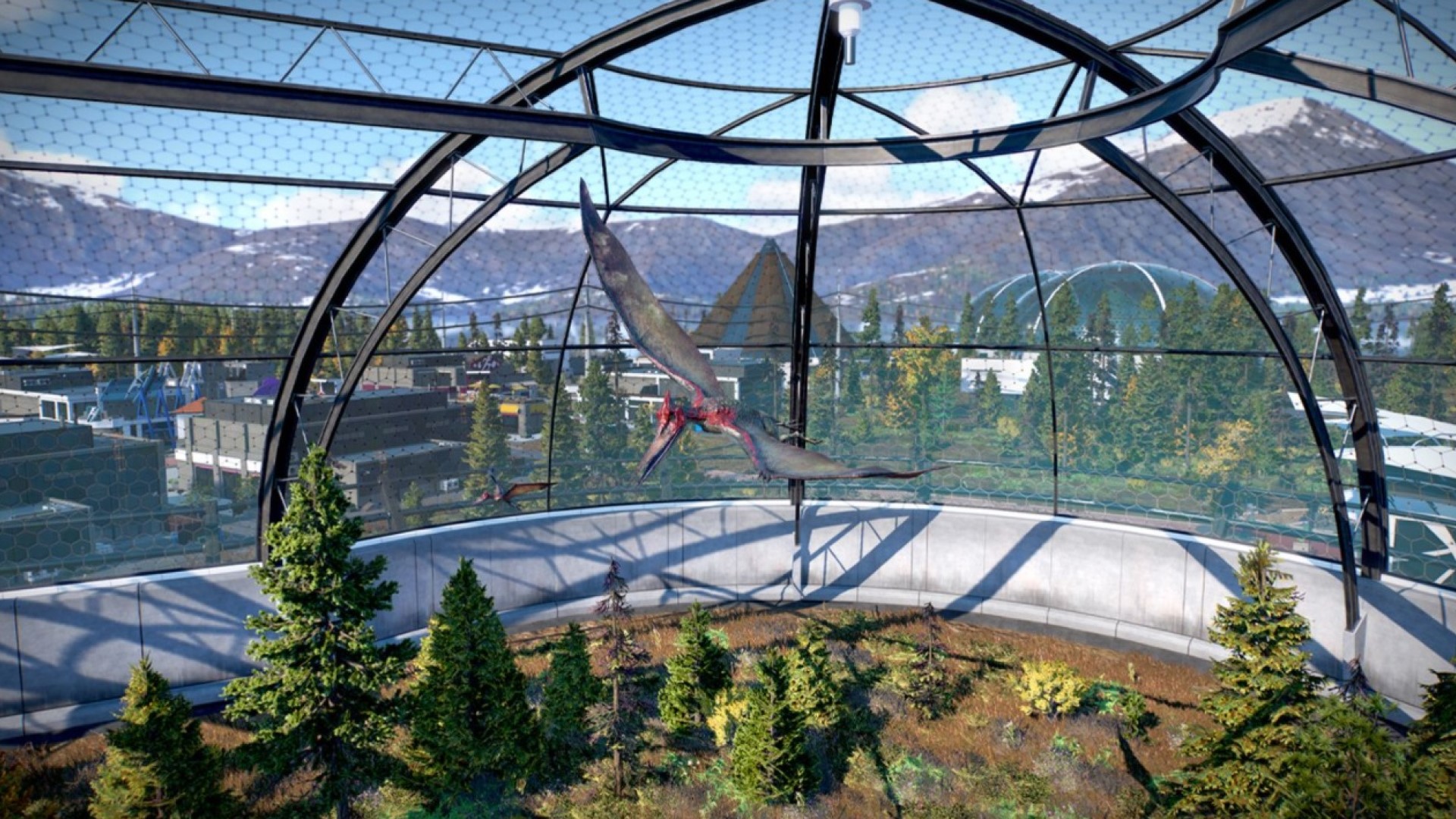 Obviously, Jurassic World Evolution 2 is about the dinosaurs first and foremost, and as any sequel should, it’s going to expand upon its predecessor in this area as well. Frontier has confirmed that at launch, the game will have over 75 dinosaur species for players to unlock and put in their parks, which, of course, will include a mix of new and returning dinos. Notably, these will also include both aquatic and flying species. The previous game only added flying dinosaurs as post-launch DLC, while aquatic ones never made it into the game, so it’s great to see both being included in the sequel right off the bat. 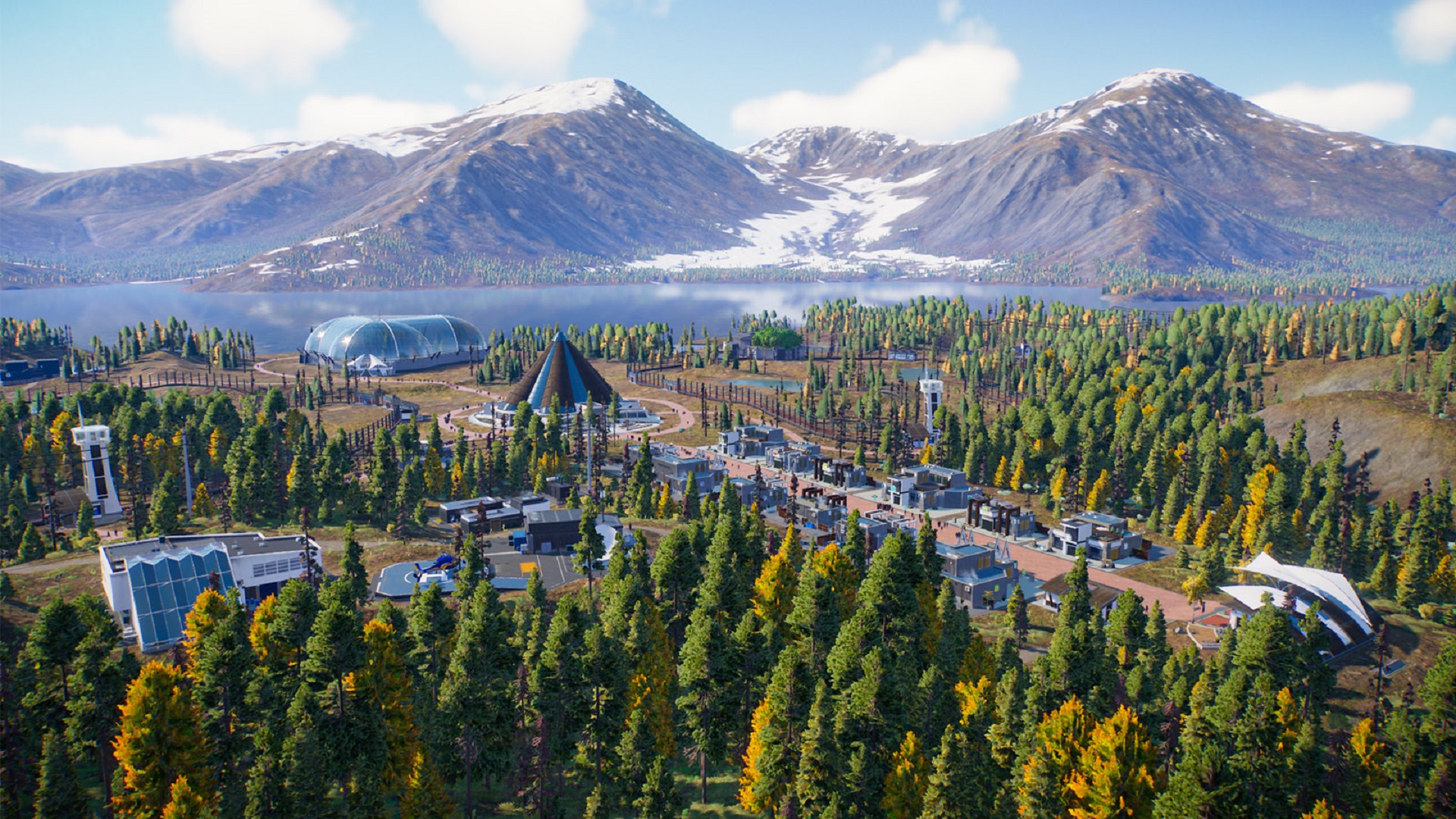 Another area where Jurassic World Evolution 2 is promising to be bigger and better than the first game, the developer has confirmed that maps featured in the game will be larger than the first one. What does that mean for the moment-to-moment gameplay? Well, lots of things, but most importantly, it means that you’ll have a lot more space to build more enclosures for more dinosaurs in your park, and even expand guest facilities to attract bigger crowds. Interestingly enough, dino behaviour will also be impacted. 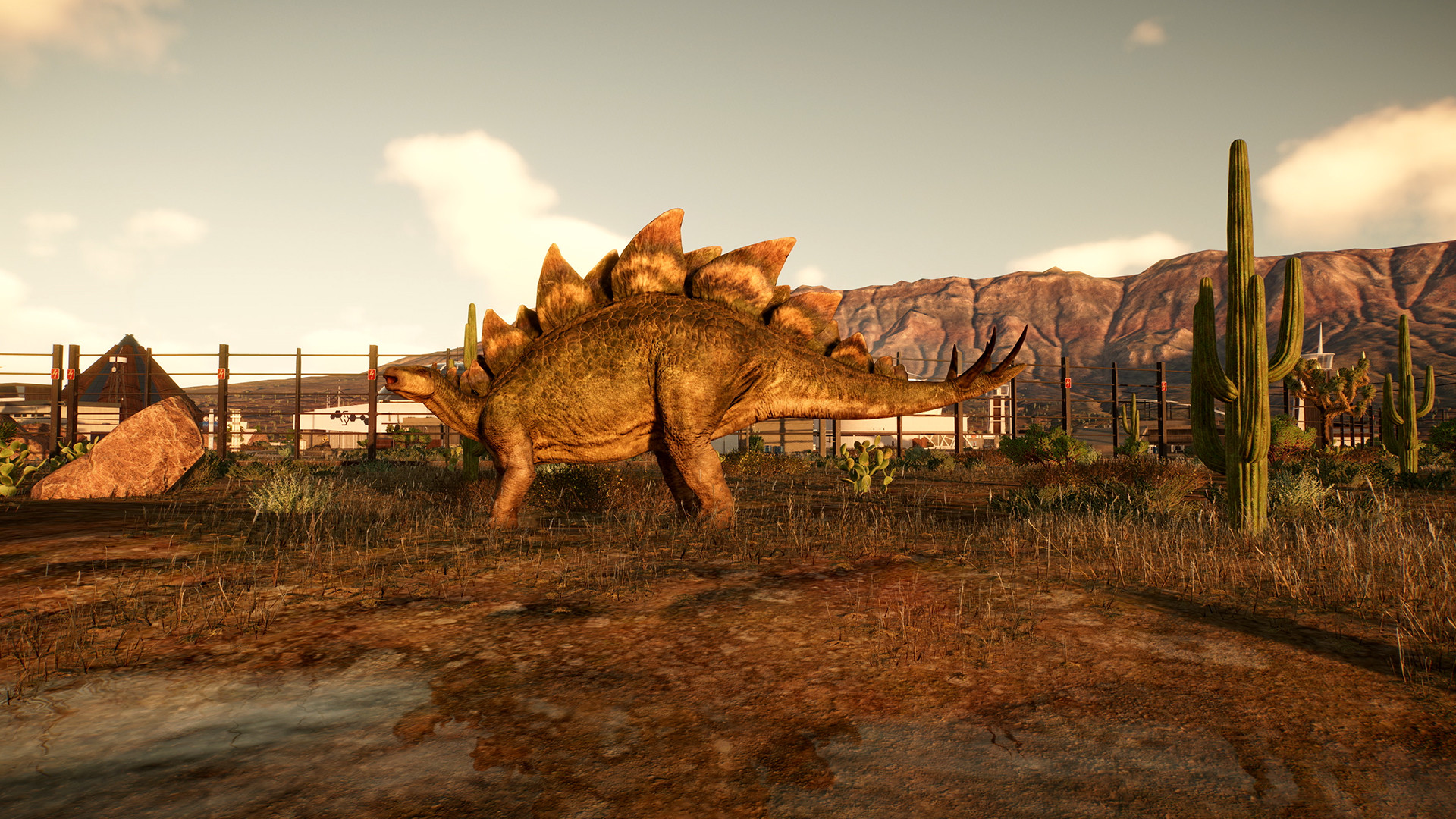 Dinosaur behaviour and their interactions with each other are being expanded quite a bit in Jurassic World Evolution 2, with quite a bit more for players to think about. Dinosaurs will often come into conflict with each other based on things such as territories, and interactions between them will be much more dynamic this time around. For instance, rather than scripted attacks, a predator will now chase its prey dynamically. Meanwhile, smaller carnivorous species will now also behave much more dynamically- for instance, they’ll now hunt in packs, especially when coming up against a bigger foe. 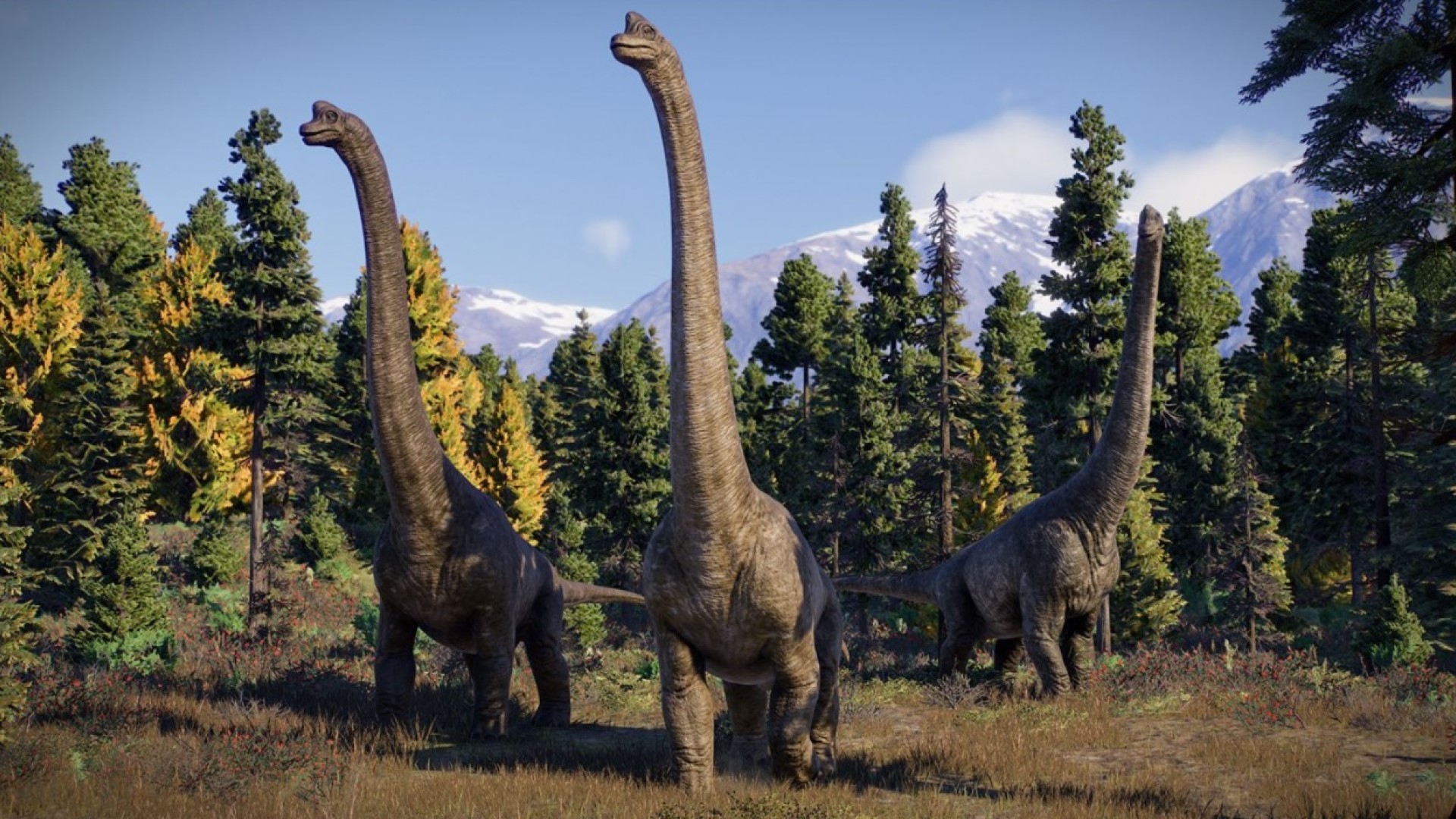 We mentioned territories earlier, and that is one of the biggest ways enclosures and dino interactions are going to change in the game. Once a dinosaur is born and put into its enclosure, it will start exploring the area and, as it finds a comfortable spot that suits its needs for water and food and what have you, that spot will become its territory. As the land changes and the dinosaur’s needs shift though, so too will its territory, which is a much more fluid and mobile concept in this game. Shifting territories, of course, also means potential conflicts as two dinos clash. 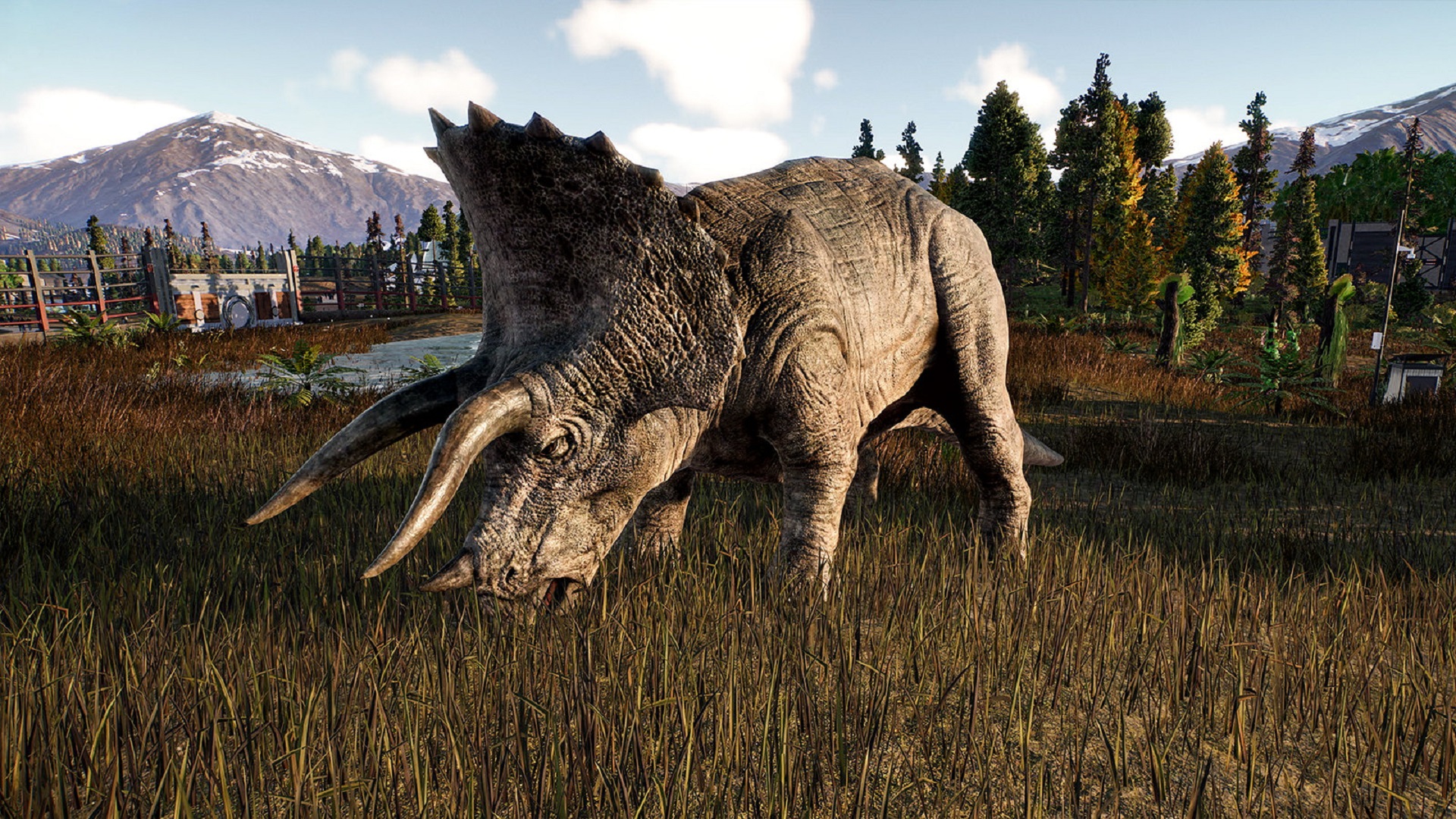 Food will be a crucial part of keeping any and all dinosaurs happy, and when it comes to herbivores, things will be handled a little differently in Jurassic World Evolution 2. While the first game had players installing different kinds of feeders for the plant-eaters in an enclosure, in the sequel, the dinos will now get their food from actual plants and trees themselves- which means they will be a depleting resource that you will have to replace, which, in turn, will affect a dinosaur’s territory.

Weather has been a massive headache for people in the Jurassic Park universe for as long as this franchise has existed, and in Jurassic World Evolution, storms and power outages were, of course, an important part of the experience. Weather, too, is something that’s being expanded in the sequel, which will see different kinds of weather patterns across different environments, including rain, thunderstorms, sandstorms, snow, and more. As you’d expect, each weather type will impact the behaviour and mood of dinos in different ways, bringing unique challenges to deal with.

Oh, and speaking of environments… 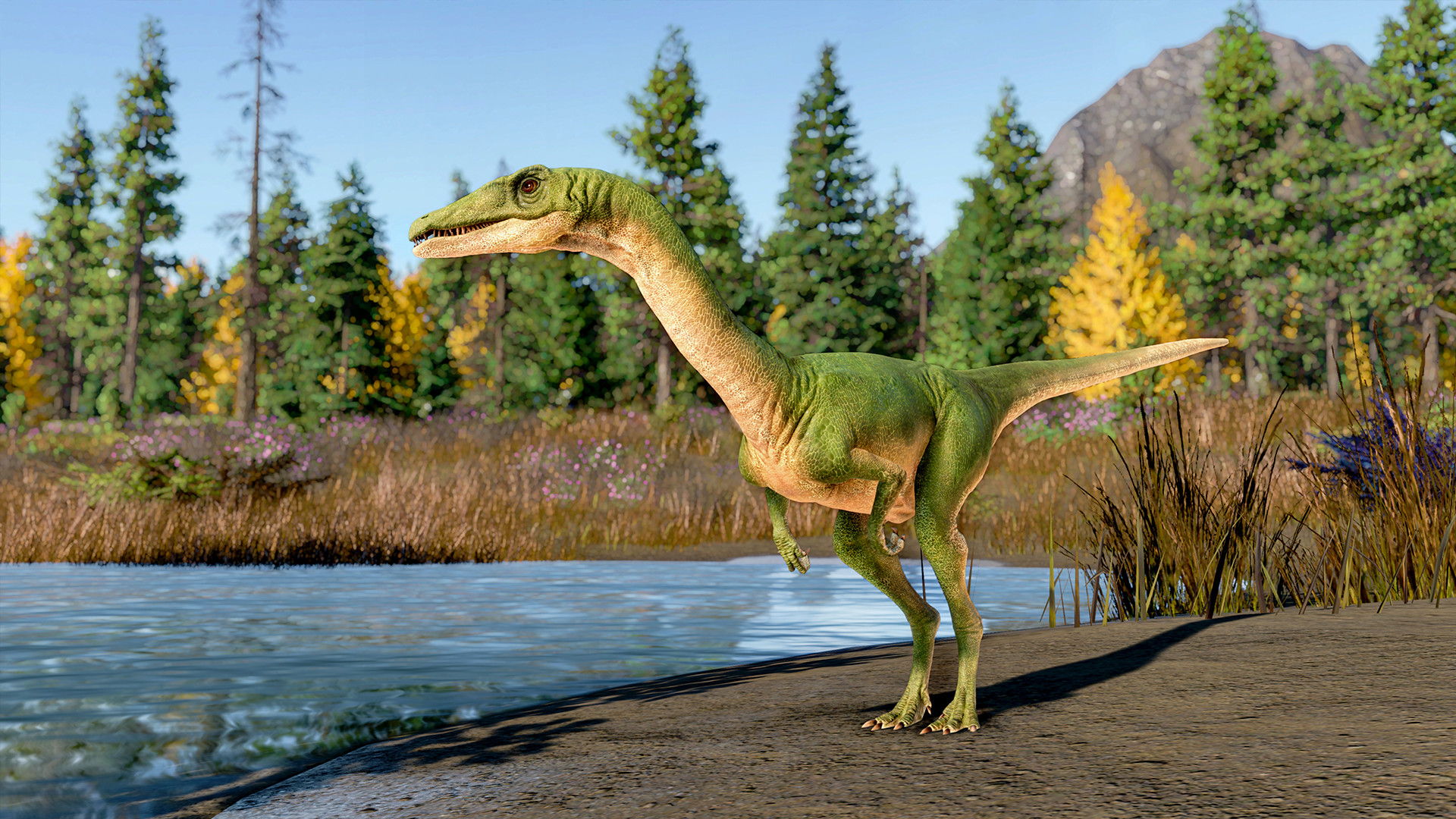 With territories and weather patterns effecting the interactions and behaviours of dinosaurs the way they do in Jurassic World Evolution 2, it follows that the game will have more environmental variety as well. While the first game was sent entirely on Lost Cinco Muertes, Jurassic World Evolution 2 will have maps spread out throughout the entire world, which means you can expect various different biomes in the game. This will include temperate grasslands, harsh deserts, snow-covered areas, and more. 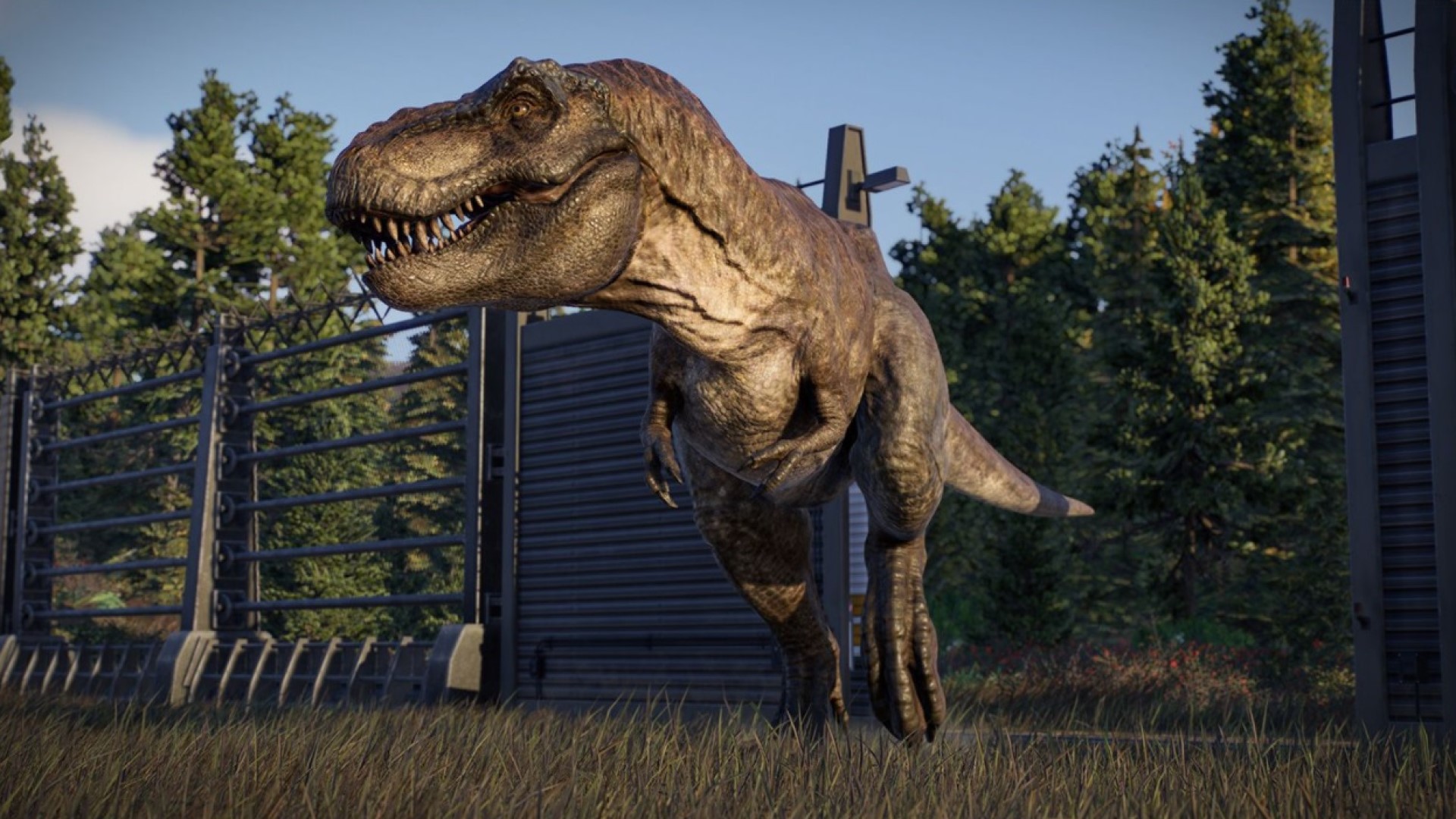 The campaign and sandbox modes are generally the two most popular ones in any game such as this one, but Jurassic World Evolution 2 will have plenty more to offer beyond that. Challenge Mode will return, of course, while there’s also a new experience in the form of the Chaos Theory Mode. Before we get to that though, let’s discuss the changes being implemented in a couple of the returning modes. 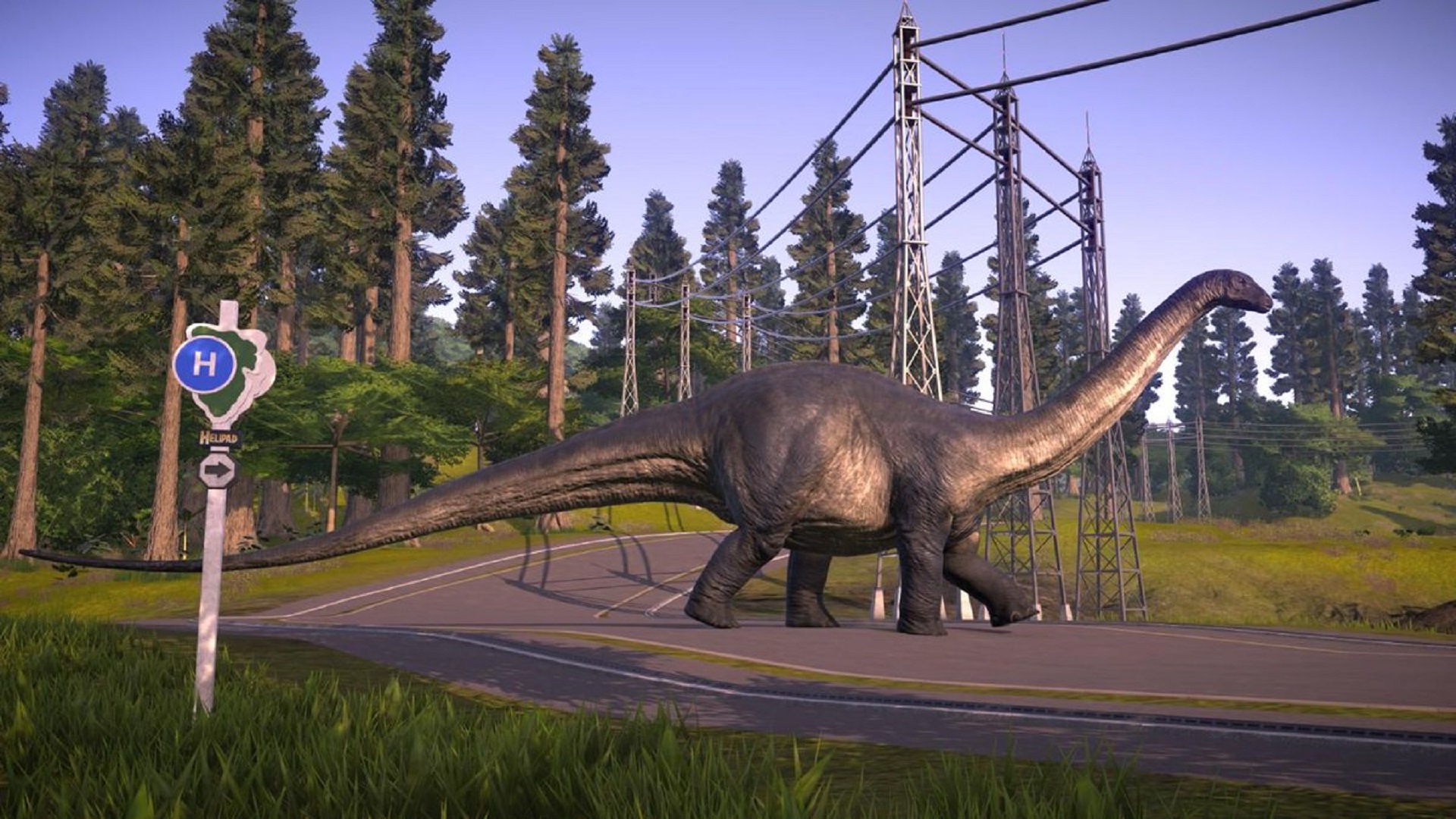 Sandbox and Challenge Modes in Jurassic World Evolution 2’s base experiences will be similar to what you remember in the first game, but both will have a few changes as well. Sandbox Mode, for instance, will allow allow you to play in maps from the Challenge and Chaos Theory Modes. Meanwhile, Challenge Mode will still come with four difficulty levels, and each difficulty on each challenge will be unlocked by attaining a certain star rating on the previous difficulty. Meanwhile, Challenges will now also have Conditions, which will vary based on what difficulty you’re playing on, such as reducing the maximum number of dinosaurs allowed in your park on higher difficulties. 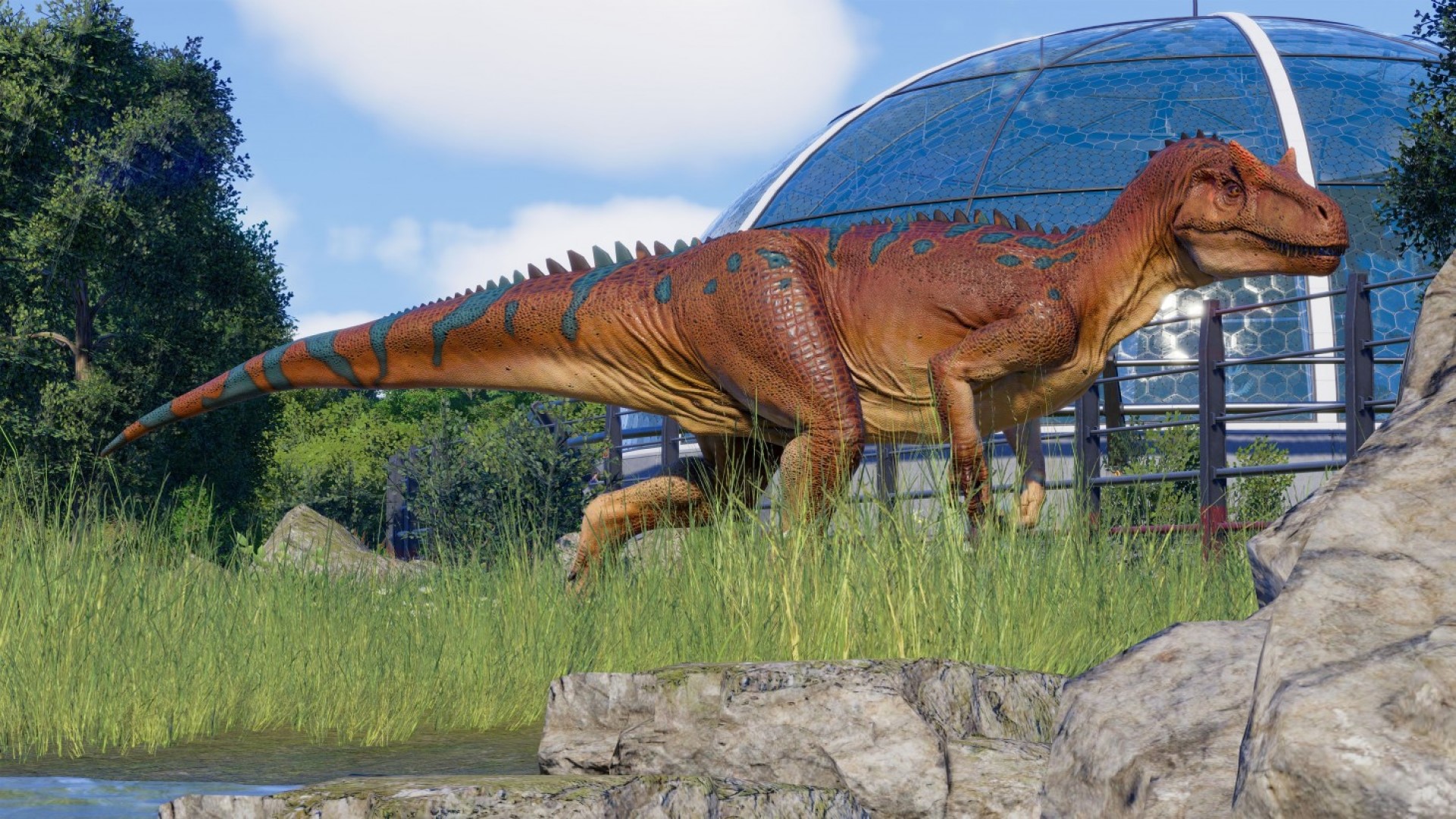 Chaos Theory is the new addition in Jurassic World Evolution 2 when it comes to mode, and it certainly sounds interesting based on what we’ve heard of it so far. It is essentially going to be a series of “what if” scenarios- alternate scenarios that will be based on iconic scenarios from throughout the Jurassic Park and World films. Exact details on which scenarios or which films will be included or how many of them there will be in total haven’t yet been shared, but the concept definitely sounds intriguing. 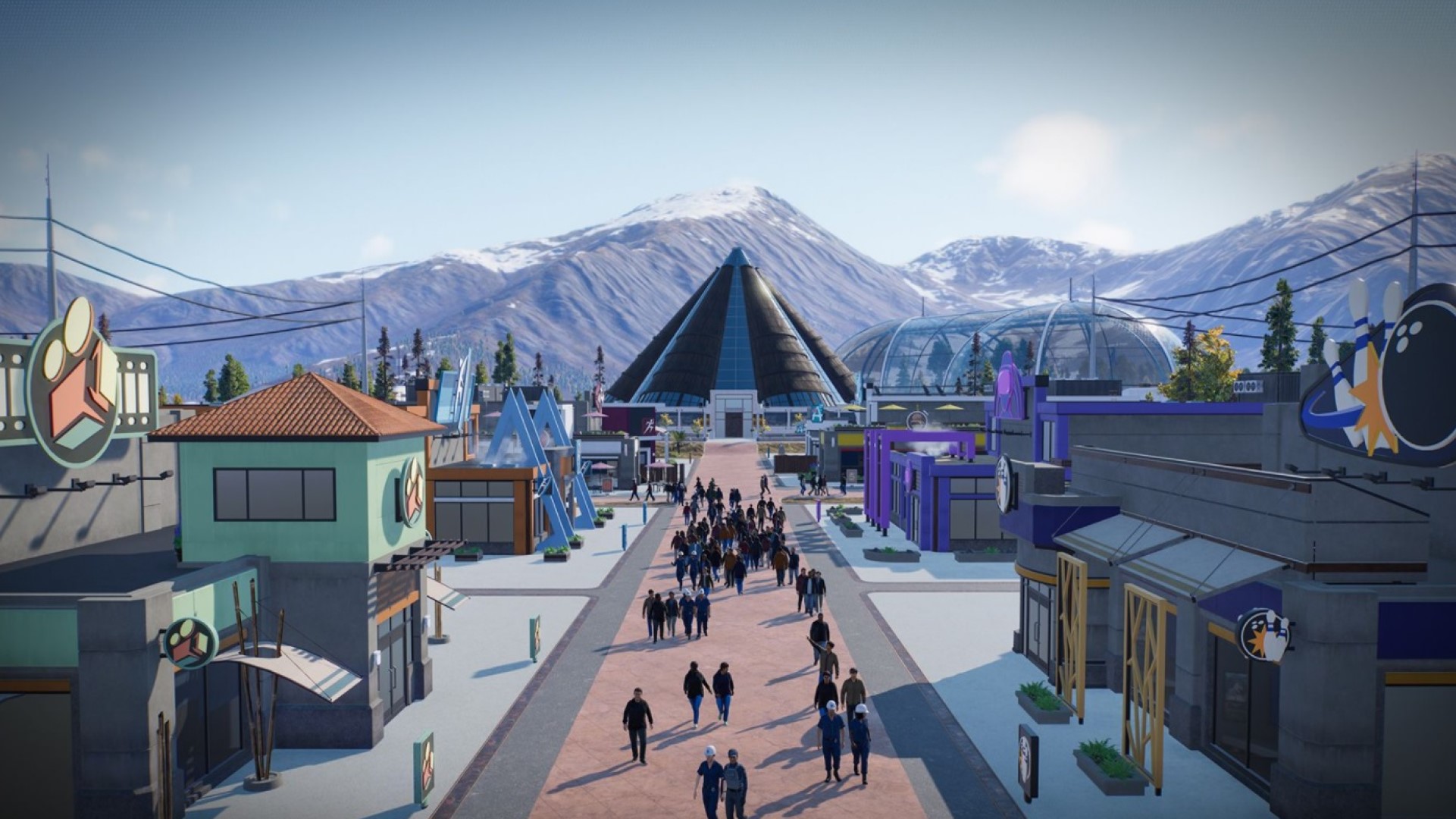 If there’s one area where the original Jurassic World Evolution fell short of expectations, it was its guest features, which were surprisingly limited for a park management simulator. That’s an area that’s seeing several improvements in the sequel. Guests will now be divided into four different categories, which each being drawn to different amenities and parts of your park- Luxury guests, who will want to see a variety of dinosaurs in addition to looking for expensive amenities such as spas and hotels and gyrospheres and what have you; Adventure guests, who’ll want to see dinosaurs with high infamy ratings; Nature guests, who’ll be drawn to the more peaceful dinos of your park and want more natural beauty in their surroundings; and General guests, who just want to see a lot of different dinosaurs. Each kind of guest will have different expectations and demands, and you will also be able to change the settings of various amenities and buildings to cater to a specific kind of guest based on which kind they’re being frequented by most often. You can also expect new scenery items in the game to beautify your park in more kinds of ways. 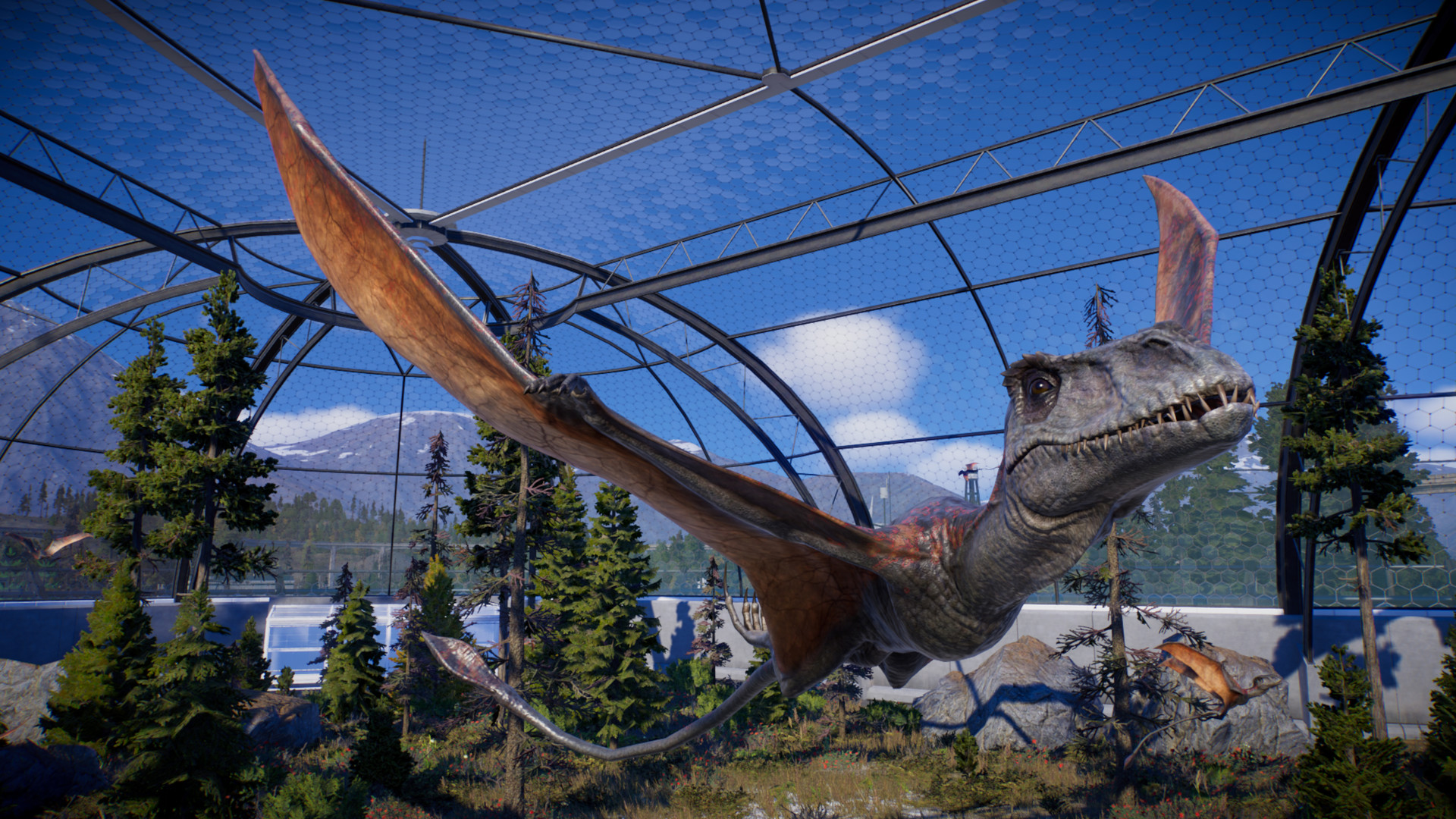 This is one of the biggest changes Jurassic World Evolution 2 is making to its moment-to-moment gameplay. Extracting dinosaur DNA and and incubating dinos will no longer be done through specific buildings like in the first game. Instead, you’ll now have to recruit various different scientists to your team, who will each have specific attributes suited to special tasks. Scientists can also be trained, but you have to manage their attributes and assign them to the right tasks, while you’ll also have to manage their workload- because an overworked and burnt out scientist can have disastrous consequences for your park. From cheaper incubations or requiring lower salaries to being faster at researching or specializing in logistical tasks, each scientist will provide unique advantages. 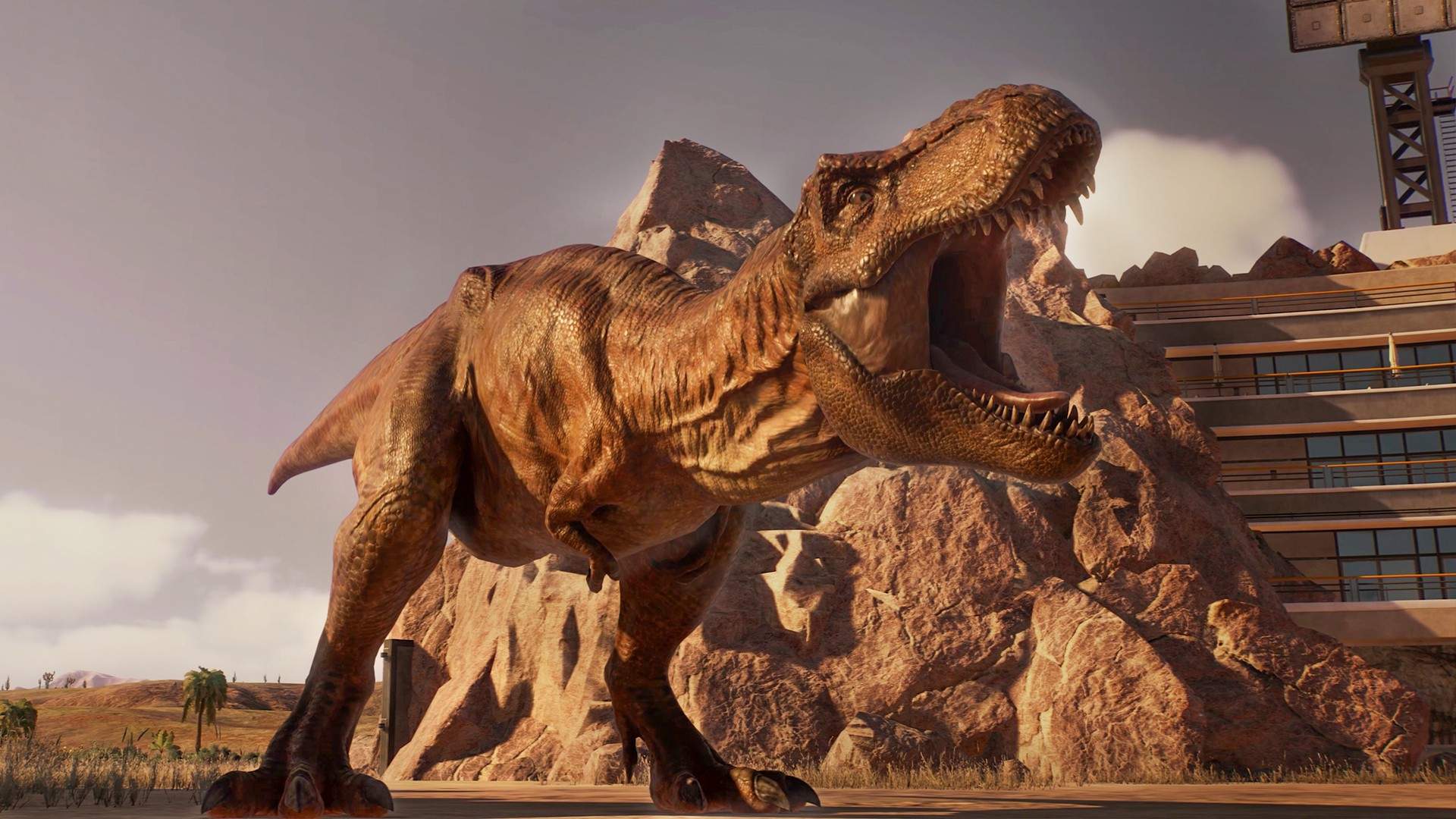 Jurassic World Evolution 2 is, of course, coming to PlayStation and Xbox consoles, but due to the very nature of the game, it goes without saying that a large number of people will be playing it on PC. If you plan on doing that, what kind of a rig will you need? On minimum settings you’ll need either an i5-4590 or an FX 8370, along with either a GeForce GTX 1050 Ti or a Radeon RX 470, and 8 GB of RAM. Meanwhile, on recommended settings, you’ll need either an i7-5775C or a Ryzen 5 1500X, along with either a GeForce GTX 1070 or an RX 570, and 12 GB of RAM.