Time to get sweaty

The problem with the music and dance-themed games that have become so commonplace these past few years is that they seriously mislead gamers. Hit a few “Perfect” scores after a well-timed move or button press and you’ll mistakenly think you’ve actually got some skills. By the time I’d played Just Dance 4 and was left in a heap on the sofa sweating from every pore, I was convinced I was actually pretty nifty on the dancefloor and possessed some truly staggering moves. 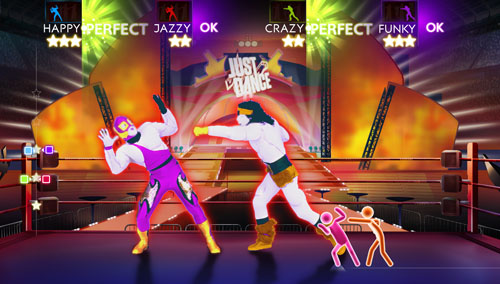 Crammed full of tunes, the latest Just Dance is a great party game

Sadly, despite my exertions, it seems that I’m still destined to never impress the fairer sex with my moves in a nightclub… the truth of the matter is that I am just as mal-coordinated as I was before I’d turned my hand to a bit of Rock Lobster by The B-52’s.

But for that brief period while the scores were wracking up onscreen and I was winning the plaudits, I felt good and had a great time.

Just Dance 4 is the latest edition to the series that made its debut in 2009. With over 40 tracks – some old, some new – it’s available for the Wii, Xbox 360 (using Kinect) and the PS3 with the help of its Move motion controller. We playtested the Kinect version here and roped in a couple of friends too. 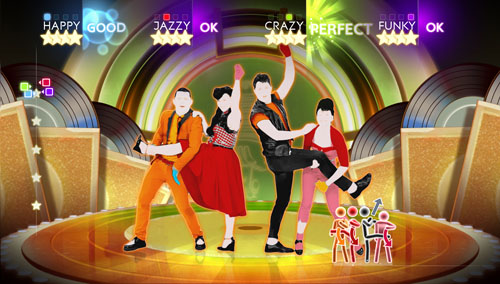 Get a few friends together and it’s a good laugh

This is a true party game, supporting up to four players at once – and the cool bit is that it doesn’t rely on an obscene amount of floorspace either. Standing side by side, there’s ample room to gesticulate wildly and bob in time with the music without causing injury.

Bright, brash and over the top, the cartoony look is attractive and clear, with animated backgrounds and the dancer(s) onscreen moving in time with the music. You’re required to mirror them. Simple. At the bottom of the screen, the upcoming gestures and movements appear, although all too often you’ll be transfixed on the main part of the screen. Right at the top there’s the player’s moniker, an indicator highlighting how many of five stars you’ve earned and text that tells you whether your moves are “OK”, “GOOD” or “PERFECT”. To the left, there’s a coloured blob representing each player that climbs a gauge to show who is winning.

Movement via Kinect works well although the accuracy is debatable. One of our party gave up half way through a dance to have a break yet it still judged that many of the moves were being achieved. Flawed perhaps, but it does mean it’s far more forgiving than titles such as Dance Central, making it well suited to younger players and novices. It’s not about having to learn the moves and pull them off perfectly, but more about giving your all. Match the gestures as best you can, and huge scores will still come. 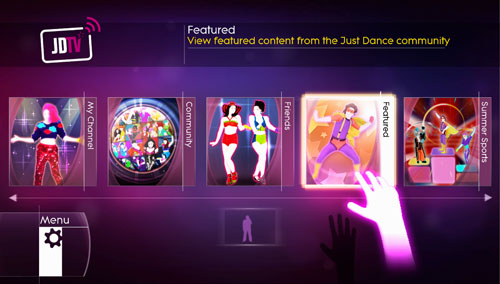 The menu screen is sometimes difficult to navigate

Perhaps the biggest gripe with the control system is on the menu screen. A hovering hand is used to select the various options and swipe through the tracks but it’s hugely frustrating in practice. It just doesn’t seem to echo what you’re doing in real life – the hand getting stuck at the extremities of the screen or refusing to click a button. It’s a very hit and miss affair, and not nearly as effective as the swiping used in Dance Central.

Importantly, the music playlist is fairly diverse and includes dance tracks, pop, Hip-Hop, rock, R&B, country and funk. Despite them not all being my preferred tunes, I recognised nearly all of them. Clearly this is a game that’s supposed to appeal to young and old – and there truly is something for everyone.

The selection includes the likes of Rihanna (Disturbia), Flo Rida (Good Feeling), Maroon 5 ft. Christina Aguilera (Moves Like Jagger), Jennifer Lopez feat. Pitbull – (On The Floor), Nicki Minaj – (Super Bass) and One Direction – (What Makes You Beautiful) to name but a few. And for the slightly older audience, there’s also some Barry White (You’re The First, The Last, My Everything), Stevie Wonder (Superstition) and Elvis Presley (Jailhouse Rock). 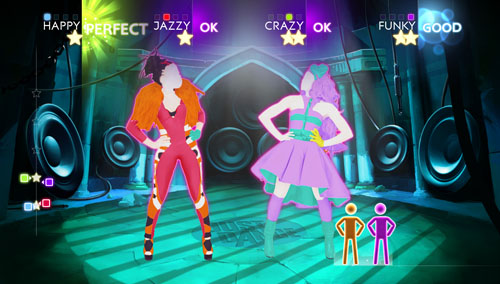 Once you’ve completed a few dances, you’ll gain points based on your performance, level up and unlock special bonus features. Besides new songs, there are various game modes available including alternative dance routines that offer a bit more of a challenge.

The Just Sweat mode makes a return, aimed at those of you a little more concerned about losing pounds than playing. There are various workouts on offer, with calorie counters and different intensities.

For sheer laughs, the new Battle Mode is a worthy addition. Here, you go head to head with your opponent in a fighting game reminiscent of the likes of Tekken. If you both achieve the moves and get the same rating, you’re safe. Should your opponent get a Perfect, for example, and you can only muster a Good then you take a hit and lose some energy from your health bar at the top of the screen. It’s a nice twist on the conventional dance modes and really pretty funny. Some of the moves are stupidly elaborate involving twists, turns, leaps and changing positions with your rivals.  Guaranteed to provide a few laughs and plenty of sweating.

If you need some downtime and manage to navigate the menus, you can lose some time watching the Just Dance TV channel and videos of other gamers who have lost their inhibitions and opted to share their efforts online. Like all such things nowadays, you can Like your favourites and so on.

Just Dance 4 is clearly not going to be for everyone – and I certainly didn’t think it would be for me. While my preferred games are generally a lot less energetic, I found myself having a great time dancing away to the tunes. With a few like-minded friends by your side, it’s easy to lose yourself and play until your heart is palpating wildly and your legs refuse to hold your weight. It’s great fun and often very funny, and will almost definitely be wheeled out when we next have friends over.

A fun party game for all ages. Decent array of tracks and game modes make this a title you’ll come back to time and time again

Clearly not as accurate as Dance Central. The menu screen is infuriating and a right pain – even scrolling can be tricky. All too soon, the room will fill with the smell of sweat!

Final Verdict:
GOOD
Ubisoft’s Just Dance series makes a return but while it largely more of the same, it remains good fun with a decent playlist and loads of entertaining game modes
A copy of this game was provided by Developer/Publisher/Distributor/PR Agency for review purposes. Click here to know more about our Reviews Policy.