Left for dead with the walking dead.

Zombies are a trope that might seem overdone in most mediums, but if anything can get away with such a tired concept and still make it fun, it’s a game like Killing Floor 2. PC players have been slaughtering the hordes of not zombies known as Zeds for a few years, but the experience has made it to consoles with this sequel. Killing Floor is not the kind of game where you really need to catch up on the narrative. It’s a very short story, written with Zed blood and Rock and Roll.

I will admit, I found this kind of hard to review due to just how specialized the game is. I’m at a loss to describe the game as anything more than “Horde Mode: The Game”, and anything outside that very particular set of skills simply isn’t something Killing Floor is trying for. Not that being focused on that is a bad thing, but it certainly limits the appeal for solo players. 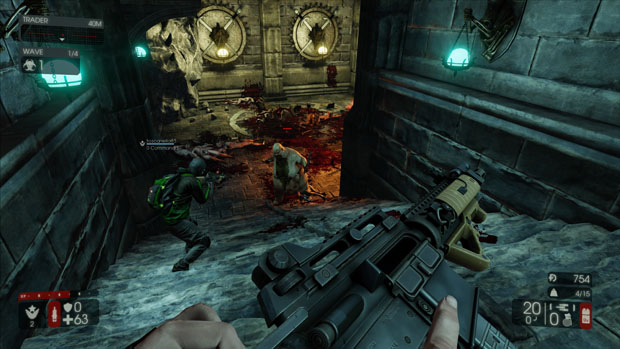 "You’ll develop one of ten perk classes, which largely amounts to picking your particular playing style in the game."

There’s a tutorial to show you the ropes and a solo survival mode best used for learning the maps, but Killing Floor 2 is built around being buddied up. Of course, random online play is an option, but I had no players opt into using a mic during my time with the game. Teamwork came from necessity and the rudimentary callout system within the game, instead of the intended and natural way of screaming out that the encroaching hoard just broke through the door, to a group of giggling buddies.

You’ll develop one of ten perk classes, which largely amounts to picking your particular playing style in the game. Between the jack of all trades survivalist to the tanking berserker, to the support medics, there’s something for everyone to find their fit on a team. Even if it isn’t a choice one can immediately make, experience towards certain perks is made while playing as another and it will become evident within a few rounds that you’re leaning toward one style or another.

The easy to grasp gameplay loop of Killing Floor leans heavily on the natural stories you’ll create with playing with friends, and the strength of the gunplay. Each weapon has a satisfying punch to it as it fires, and aiming is natural to anyone familiar with Call of Duty and its ilk. Once your team has survived however many waves designated, you’ll meet up with a boss character just as silly, and ultimately one-dimensional as the sarcastic avatars you play. 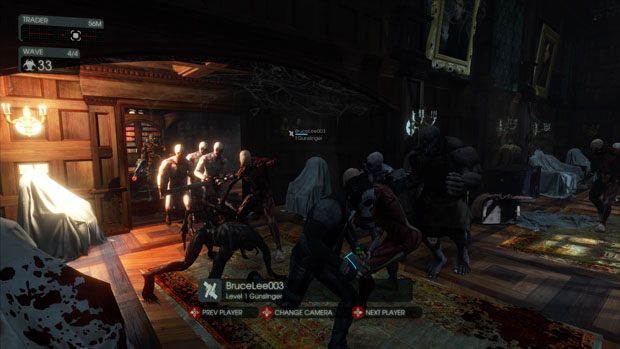 "That scenery is artistically pleasing and looks gorgeous on the PS4 Pro, you’ll also tour abandoned houses full of books, murder dungeons within research labs and a DOOM style hellscape, among a few others."

Beyond the bouquet of boomsticks that make up the firearms, you can also choose from a variety of melee weapons from a knife to a giant claymore. A rudimentary melee system offers quick attacks, strong attacks, blocking and parry moves just using the shoulder buttons, and it fits surprisingly well within the game.

All of the action takes place on one of nine different maps as of writing and none of them are particularly bad looking. The layouts of them isn’t as of much consequence as an arena shooter, since you’ll usually stick together and try to hunker down in an enclosed choke point. To prevent getting too comfy, you’ll have to run to a new supply pod between rounds and restock or upgrade everything within a limited time, which was a detail I appreciated, as it kept the game moving and giving me new scenery to paint with Zeds.

That scenery is artistically pleasing and looks gorgeous on the PS4 Pro, you’ll also tour abandoned houses full of books, murder dungeons within research labs and a DOOM style hellscape, among a few others. One liners and callouts rain from the different selectable avatars and boss characters, with enough variety they never quite become annoying. The butt rock blasting during waves worked right to my tastes, pumping up the intended high energy atmosphere. 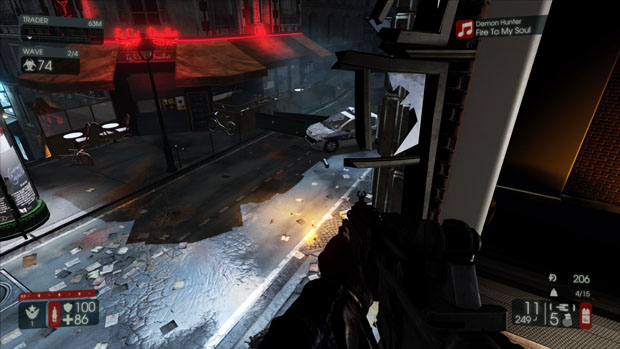 "Killing Floor 2 does the one thing it tries to do very well, and for the asking price it’s hard to fault the game for playing to a singular strength"

Aside from the normal wave after wave survival mode, the new addition to Killing Floor 2 takes a leaf right out of Left 4 Dead, letting another team take control of some of the special Zeds. What should have added another great layer to the game feels rather unbalanced in the end, If a player isn’t lucky enough to gain control of the tank like Fleshpound Zed, they basically might as well already be splattered against the wall already.

Killing Floor 2 does the one thing it tries to do very well, and for the asking price it’s hard to fault the game for playing to a singular strength. Nailing a sense of style can be a struggle for some games. Killing Floor 2 though has that in spades, largely thanks to the safe premise. You and up to six buddies teaming up to get through waves of legally safe, if creatively bankrupt Zeds should be an easy enough sell on its own. If you can find some buddies to crush some skulls (and some beers) with while you blast some Metallica, Killing Floor 2 is going to treat you right.

Presentation is great, and there’s nothing to complain about with the mechanics and team based survival gameplay.

No meat to the game outside of horde, offering very little to solitary players. PVP mode is unbalanced for the Zeds.

I can’t fault Killing Floor 2 that much for focusing on a co-op experience, and it does that very well. The gunplay and gameplay loop is great fun when you have a core group of friends with you, I just don’t see it as having value outside of that setting.

A copy of this game was provided by developer/publisher for review purposes. Click here to know more about our Reviews Policy.
Tagged With: Killing Floor 2, pc, ps4, Tripwire Interactive