I sometimes wonder who decided that motion controls were the way forward for our modern generation of consoles. Some titles manage to get away with it but, generally speaking, you always wind up looking terribly foolish. Microsoft’s Kinect seems to be the worst offender of demeaning us during our leisure time and Kinect Joy Ride seems to take this to the ultimate extreme.

For those of you who haven’t guessed, Kinect Joy Ride is a racing game for the Kinect sensor in the vein of Mario Kart. You hold your hands out in front of you as if you’re grabbing a steering wheel and you twist your hands left and right to steer. I was ridiculously sceptical of the initial control premise, but I must yield that it generally works well. You can thrust your left hand out to use the weapons you collect on the course and you can tilt your body to drift round corners or perform flips and spins in the air. It all feels pretty natural and generally works, aside from the boost mechanic. The idea is that you can pull your arms back into your body to build up the boost meter and then thrust them forward for a burst of speed. It sadly just doesn’t work that well and I can’t imagine why. I’ve seen the Kinect track far more complex movements before, yet the majority of the time it would completely fail to detect me trying to boost. The controls work better than I imagined they would, but I would certainly argue that there are creases that need to be ironed out. 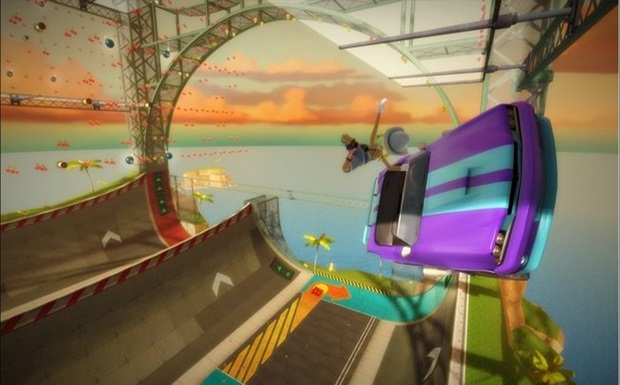 Whilst it’s fairly easy to just jump into Kinect Joy Ride and have a good time, I was somewhat disillusioned with the depth of the gameplay on offer. For a start there are only a few modes to choose from, though it must be said that there is a reasonable variety within these modes. You have the pro and battle race that either lack or have weapons respectively and see you contesting to finish the course first. You then have the stunt mode where you race around a half pipe trying to score the most points with aerial tricks. The smash mode sees you skidding around an arena trying to knock down as many objects as possible and the dash race sees you running a time trial through a course littered with obstacles. The final mode is the trick mode that actually takes place on an aircraft and has you having to mimic poses shown on screen accurately to get the high score. There is certainly a nice variety in the modes but, considering the main race mode only has seven tracks, you might find that Kinect Joy Ride is a little lacking in things to do. 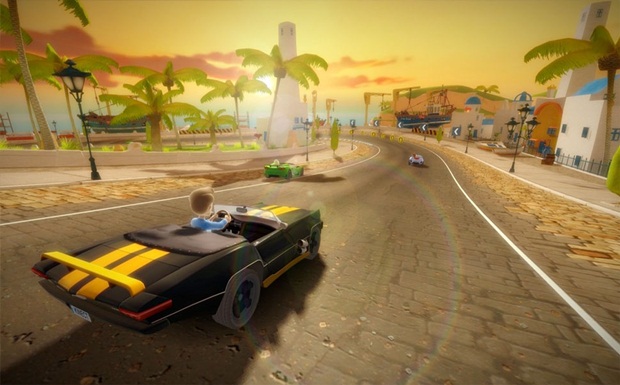 The graphics, though simple, have a certain charm to them

The modes begin locked but as you progress through the challenges and earn “fans” you can unlock new modes, tracks and cars. Sadly, the new cars you can unlock fail to alter any aspect of the experience in any major way aside from the purely aesthetic. Indeed it seems to be the general motif of Kinect Joy Ride that you just wind up with the feeling that you’ve seen it all before too early on. Even the selection of weapons and tricks you can do is sorely limited. It does rather hamper the potential lifespan of Kinect Joy Ride when you come to realise you’ll be engaging in fairly monotonous racing techniques over and over again. That said if you throw in a second player to join you, Kinect Joy Ride can really come into its own and is likely to offer you much more enjoyment.

The simplicity of Kinect Joy Ride also permeates its aesthetic values, but this actually winds up working in the game’s favour. The graphics have a rather cartoon-like feel to them and, even though they are somewhat basic, the game allows you to use your avatars in game because of this. The textures and character models are all fairly flat and bland, but the colourful palette somewhat saves it and gives the game a vibrant feel visually speaking. The sound is also pretty good across the board with some cheeky comic book sound effects and infectiously catchy menu music to keep you whistling away. 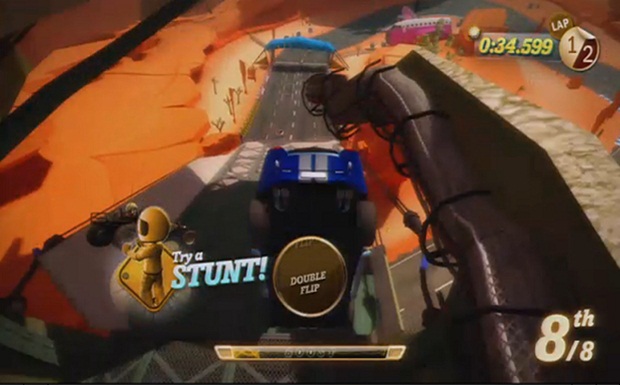 The mid-air tricks are a nice addition, even if they are a little limited

Kinect Joy Ride isn’t a bad game by any means, and the fact that it almost gets the controls right should be lauded as a major achievement. Despite this it must be said that Kinect Joy Ride would almost serve better as a demo. It is certainly enjoyable for a while, but within a hour or two of playing I quickly found myself tiring of the experience. Joy Ride would certainly be worth a rental if you’re interested in trying it out, but I’d recommend thinking twice before shelling out the full retail price for it.

Basic racing mechanics can get very dull, Lack of tracks and weapons, Not many modes to sink your teeth into, General absence of gameplay depth

Final Verdict:
FAIR
An attempt at making a mario kart style race for the Kinect, Kinect Joy Ride is a good accomplishment in motion controlled racing that is unfortunately marred by some patchy controls and shallow game mechanics
A copy of this game was provided by Developer/Publisher/Distributor/PR Agency for review purposes. Click here to know more about our Reviews Policy.