Who doesn’t love the thought of using Lightsabers and mowing down a bunch of enemies. If you have watched the Star Wars movies, then you will know how amazing it could be to do that in real life. Kinect Star Wars offers gamers an opportunity to this, and it is quite a beefy game considering the sheer amount of modes it has. But that’s expected considering it’s a big budget game for a popular platform and made by Microsoft. 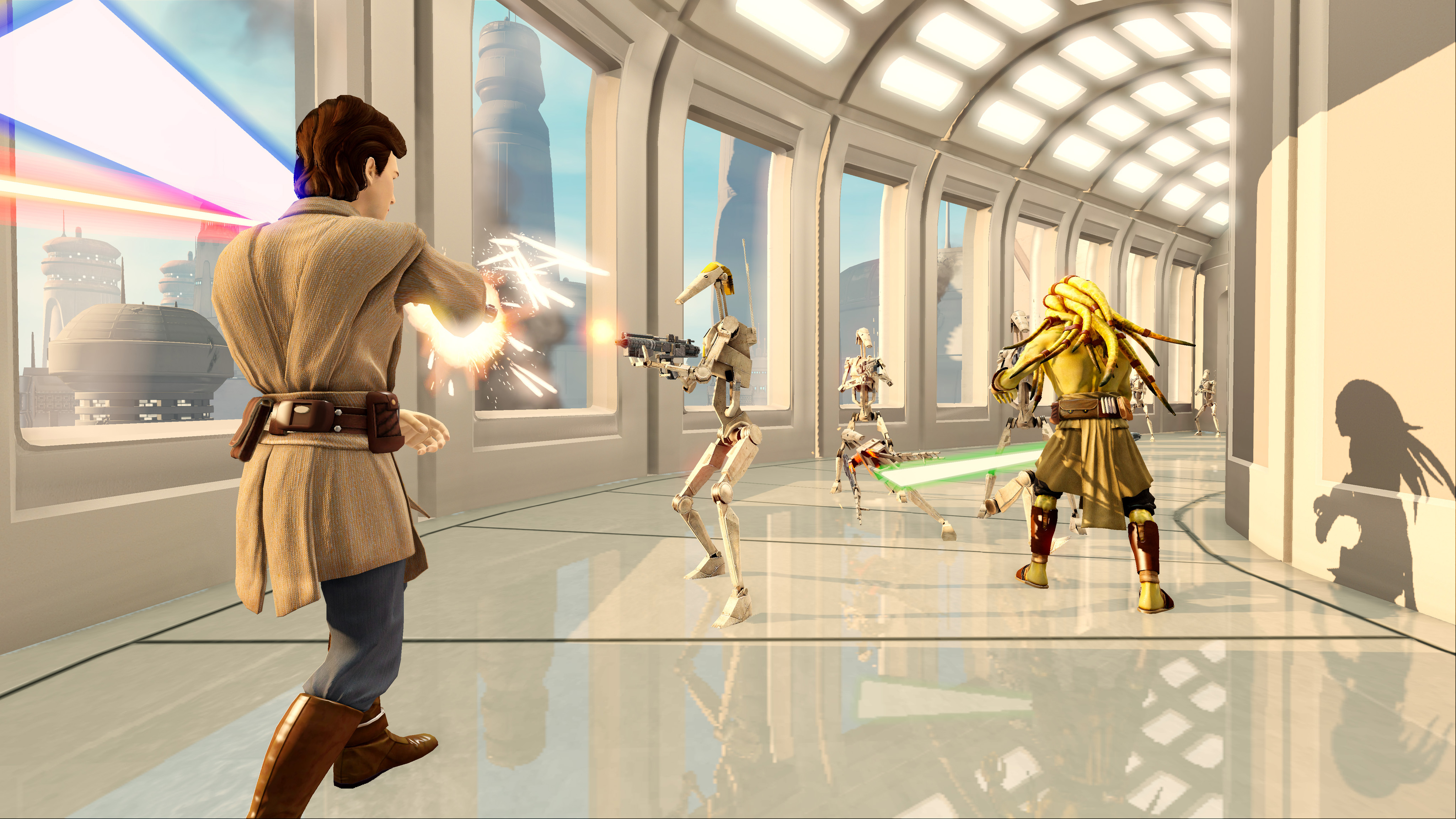 Considering it’s a Kinect game, there are some interesting mechanics implemented here, and most of them are your usual basic physical movements to control your character. You control a Rancor here as well. Yes, you heard that right, a friggin’ Rancor. There’s a separate mode for that called Rancor Rampage where you can do that – and it has provided the most fun moments in my Kinect Star Wars experience so far.

There are some batshit insane modes in this game which I will explain after a bit, but let’s talk about the single-player mode. What makes it special? Well not much, but you can experience some good nostalgia here if you are a Star Wars fans. There are a few tutorial modes here where Master Yoda ways of the Jedi, he teaches to you. You can also avail of force powers in the game and seriously, it’s Star Wars. All the classic Lightsaber actions and the force moves will be available, and yes they can provide some exhilarating fun if you can bear with the clumsy Kinect tracking for a while. 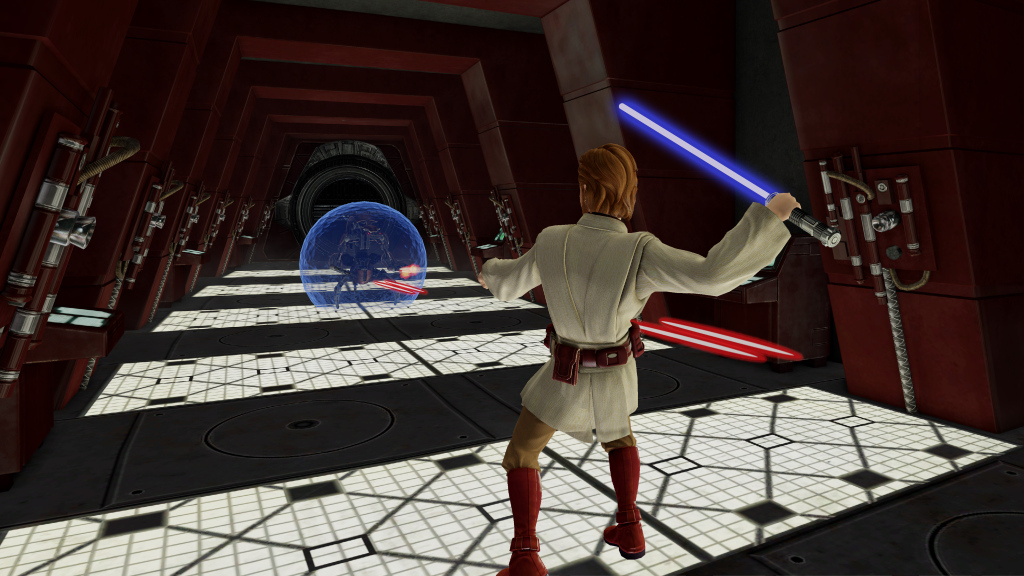 Coming to the tracking, I felt the Kinect did a good job here at tracking the players’ movements. Considering I have been playing Kinect games since it was unveiled two years back, I can understand how far it has come. There are a lot of tricks the developers have up their sleeves nowadays when it comes to developing for Kinect and it has mostly resulted in a positive experience for gamers. Kinect Star Wars is a big budget game, and had 200 odd people working on it. Microsoft doesn’t generally do this unless they plan on selling big, but does the massive development team lend any advantage to this game? I don’t think so.

The major issue with the game is that it is frustrating to get used to the controls, for example, the game is entirely on-rails which means to move forward you have to move your body forward and your characters flies towards the target. You can kick your opponents and jump over the top and all of that is easily tracked by the Kinect, but where I have an issue with the game is with the Lightsaber attacks and the force attacks. I know that these gameplay mechanics are quite vital to the game, but unfortunately, this is what makes Kinect Star Wars fall apart. 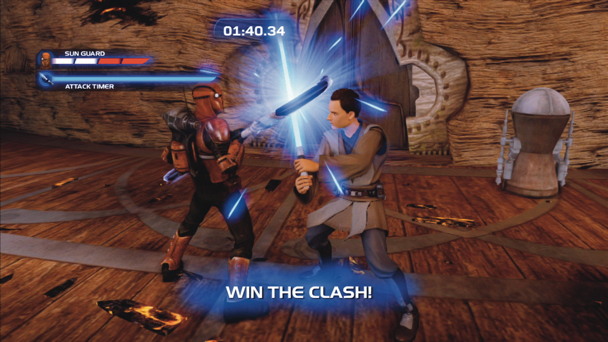 The game’s camera is quite horrible and will usually end up confusing you, and that’s a big achievement considering it’s an on-rails game. You can also deflect enemy fire using the trademark Lightsaber move and this one works pretty well, and is tracked accurately. You can also stop incoming projectiles with your force powers and it is again, quite accurate but trouble is when you have to throw enemies or any object at a specific direction, it mostly doesn’t work well.

Then there’s the racing mini-game that you encounter in the first level itself after the tutorial. I have to say I enjoyed this, but using your body to move the ship was extremely annoying. When there are a lot of opponent ships firing at you, it can get a little convoluted and the screen results in a cluster *bleep* of epic proportions. 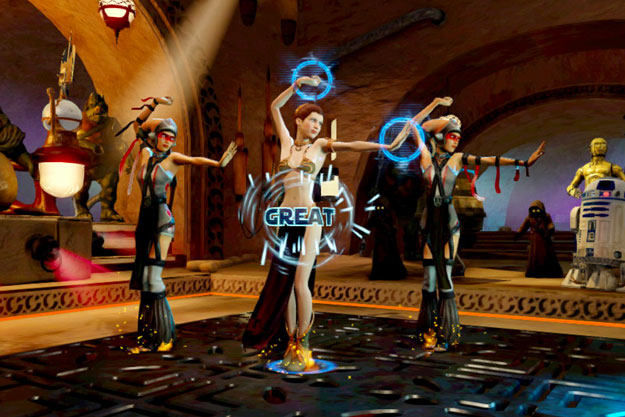 Have you played Dance Central? Nope, then you can do that here with Star Wars characters. It’s called Galactic Dance-Off mode and it is the most absurd thing I have ever seen in a game before. It is like a mode that is mainly added to take advantage of Kinect’s popular selling game and use those gameplay mechanics here. It’s not a bad thing but it shows how desperate the developers are here. This shouldn’t have been added in the game at all, and it is not a proper fit.

Kinect Star Wars works well in certain conditions and if you are a fan of the lore and Star Wars in general, and aren’t bothered by the Kinect controls and have a lot of patience then this game is recommended. But if you have a passing interest in Kinect games, but want to check this out, here’s my advice to you. Don’t.

The game is fun. Some of the missions are good. High production value. Kinect's tracking is a mixed bag but largely decent.

It is frustrating. Some modes are tacked on, but the single player mode is good. Best way to use your force powers.

Final Verdict:
GOOD
Kinect Star Wars works well in certain conditions and if you are a fan of the lore and Star Wars in general, and aren't bothered by the Kinect controls and have a lot of patience then this game is recommended. But if you have a passing interest in Kinect games, but want to check this out, here's my advice to you. Don't.
A copy of this game was provided by Developer/Publisher/Distributor/PR Agency for review purposes. Click here to know more about our Reviews Policy.