Just on account of the Nintendogs franchise not being successful and annoying enough, Microsoft has deemed it plausible to play the copycat game (excuse the pun) by releasing Kinectimals for their new Kinect hardware. The game immensely depressed anyone with half a brain cell at E3 this year as it showed that Microsoft was really ready to completely rip off Nintendo with their foray into the motion controller domain but, as a stand alone game, Kinectimals offers more fun than you may have initially thought.

Kinectimals is essentially a compilation of motion controlled mini-games that revolve around you looking after a cute cat and looking for treasure. There is a loose story about you moving to the island and searching for gold that a pirate left their long ago, but it’s all fairly arbitrary and by the book. It certainly does a reasonable job of attempting to create a cohesive single player narrative, but it’s unlikely to be the focal point of your attention. 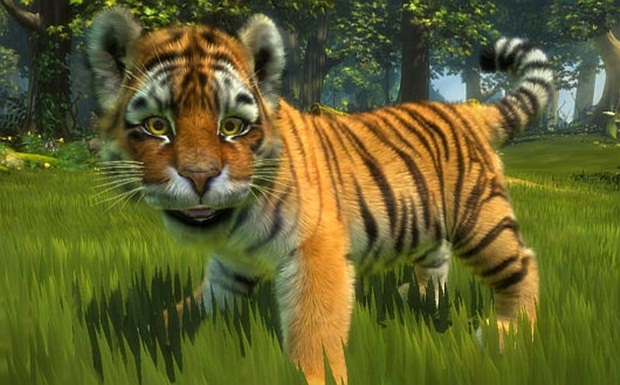 Be honest, you want one

The initial aspect of Kinectimals that will likely catch your attention first is the visuals. There is no doubt that Kinectimals is the best looking launch title for the Kinect and, even though it took me a while to get used to the fur and hair effects, the graphics on display are top class. It certainly adds an element of charm to Kinectimals and, even as a grown man, I will unashamedly admit that the tigers you get to take care of are just too cute for words.

The sound also deserves a real thumbs up as, when combined with the rather chilled out pace of the gameplay, the smooth tones of the soundtrack evoke a really peaceful mood. Kinectimals is certainly one of the more relaxing gaming experiences I’ve had in some time. The proverbial cloud to this silver lining is the little flying squirrel guy who follows you around who is endowed with the most annoying voice ever. Imagine what would happen if you combined the sonic qualities of Chris Rock and Paris Hilton and you’re about halfway towards understanding how irritating this little freak of nature sounds. 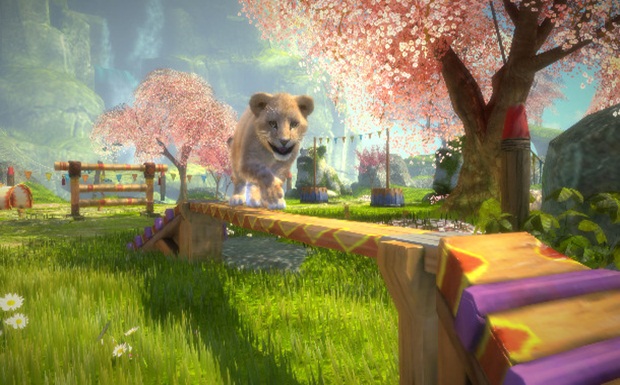 One of the many tricks your feline friend will learn

The main crux of the gameplay in Kinectimals revolves around looking after your furry friend. As you teach, groom and play with your loveable kitty cat you unlock challenges that take you that little bit closer to the lost treasure of the island. The main thing Kinectimals is able to get down is the use of the Kinect technology. Whether you’re teaching your pet tricks by shouting commands into the microphone, or reaching out to pet your feline friend, the motion controls just work and respond perfectly. The ability for the camera to sense your whole body is also impressive, as you can just step from side to side if you want to tickle your cat’s back or get a new perspective on a challenge. The only control issue I would highlight is in the control of ball throwing games. Many of the challenges and toys you use to interact with your pet involve throwing balls. The problem is that, without any buttons or tactile controls, the motion sensor can’t detect you letting go of a ball. It makes a reasonable attempt at guessing when you’d want to release the ball as you swing your arm, but it gets it wrong regularly enough to become mildly frustrating.

Though the story of Kinectimals is likely to take some time to plough through, it is unlikely that it will hold your attention for long. Indeed the biggest weakness of the game is in its repetitive nature. No matter how many different types of cat they give you, it is basically just another skin for a very similar animal. Likewise the differences between throwing a tennis ball and throwing a rubber chicken are few and far between. The game does a good job of trying to throw up a few surprising new toys and challenges along the way, but there is no doubt that you’ll wind up repeating several tasks fairly regularly. As I say this it is important to keep in mind the target audience of Kinectimals in mind for, whilst I can complain of getting bored of it as an adult, a child is less likely to tire of the game regardless of how monotonous it can be. 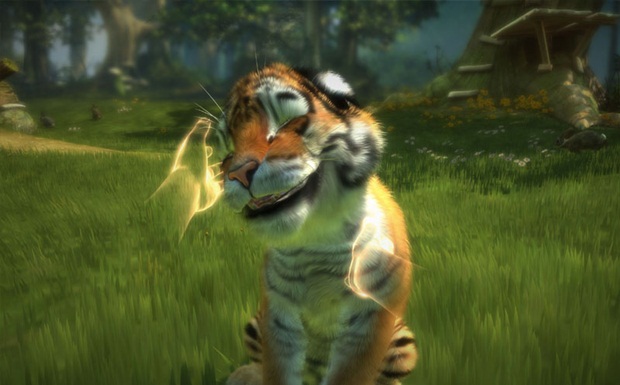 The motion controls make a lot of sense and, generally, work really well

Kinectimals is a great example of the creative ways in which the Kinect hardware can be used and, even if it can get a little dull after a while, there is no doubt that younger players will be enthralled with the vivid world that Kinectimals creates. There are a few control issues here and there, but Kinectimals is actually much more of a solid gaming experience than I initially assumed after seeing its E3 showing. For families with young kids who want a fun adventure for their new Kinect hardware, Kinectimals will serve you very well indeed but older players will find their money better invested elsewhere.

It's a very relaxing experience, The animals are extremely cute, Outstanding presentation, Reasonably long adventure, Great use of Kinect hardware

Some control issues, Can get repetitive, A few annoying voices, Clearly aimed at a younger audience

Final Verdict:
GOOD
Yet another motion controlled title that appeals to the casual family audience, Kinectimals offers a surprisingly robust story mode but a little too much repetition prevents it from appealing to all demographics
A copy of this game was provided by Developer/Publisher/Distributor/PR Agency for review purposes. Click here to know more about our Reviews Policy.