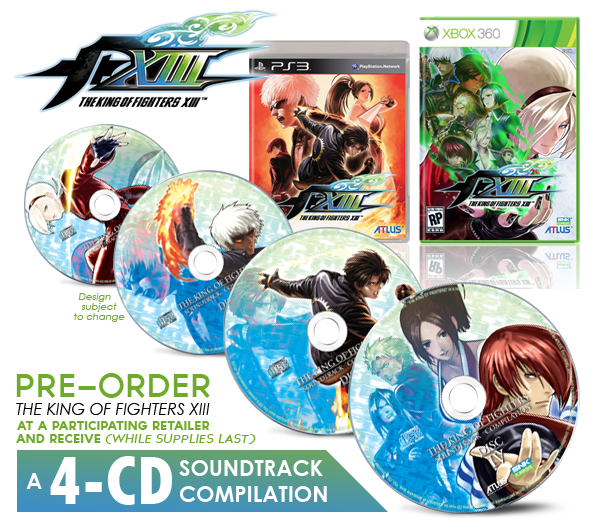 The infamous King of Fighters game has its latest edition coming out, King of Fighters 13.  Atlus has announced that there will be a 4 CD Soundtrack Set available with the game.  View the latest gameplay trailer and the official press release below.  Developed by SNK Playmore the standard arcade edition retails for $49.99 and will be available this October for the Xbox 360 and Playstation 3.

IRVINE, CALIFORNIA — JULY 29, 2011 — ATLUS today unveiled a tremendous offer for fans who pre-order their copy of THE KING OF FIGHTERS XIII, the latest entry in the legendary fighting franchise, for PlayStation®3 computer entertainment system (PS3™) and Xbox 360® video game and entertainment system from Microsoft.
At participating retailers while supplies last, fans who reserve KOF XIII will receive a 4-CD soundtrack compilation with music spanning the 15+ year history of the famed series, certain to be one of the best collectible extras in franchise history.  Fans are strongly advised to reserve their copy as soon as possible at participating retailers to guarantee themselves the bonus soundtrack compilation!
Alongside news of the pre-order only 4-CD bonus, ATLUS also today shared new information regarding the console release of KOF XIII, detailing a host of game modes exclusive to the home version.
ATLUS also invited fans to join them at EVO 2K and Otakon (7/29-31).  With a playable early version of the console release open to the public, plus a panel with KOF XIII’s director at EVO 2K (7/30 at 10:00am PDT), the shows offer the perfect opportunity for the community to get a sneak peek at the game in action and ask their most pressing questions.
THE KING OF FIGHTERS XIII is scheduled to release in October for PlayStation 3 and Xbox 360 systems.  For more info, visit http://www.atlus.com/kofxiii.